Ranked No. 1 For First Time In School History, Purdue Heavily Favored At Rutgers 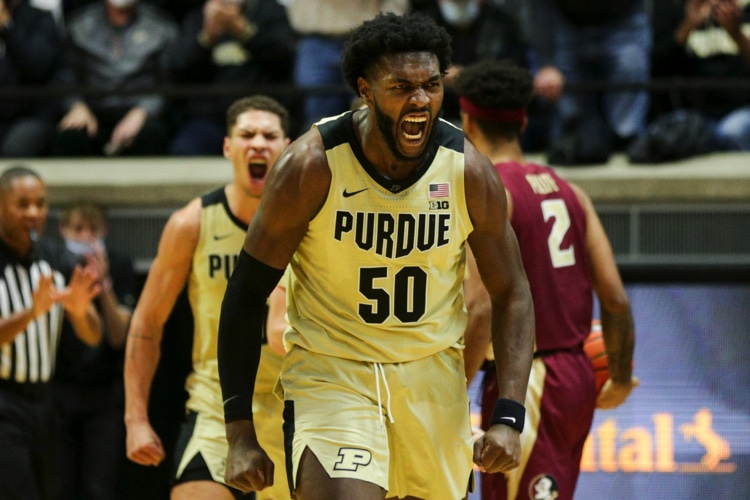 Holder of the No. 1 spot in The Associated Press Top 25 for the first time in school history, Purdue looks to stay unbeaten Thursday night when it faces Rutgers on the road in a Big Ten clash.

The Boilermakers (8-0, 1-0 Big Ten) were ranked 7th in the preseason poll and have steadily climbed from there. Their wins over Florida State and Iowa last week, coupled with then-No. 1 Duke’s loss at Ohio State, elevated them to the top spot Monday. Purdue received all 61 first-place votes and now looks to further its best start since opening 11-0 in 2015-16.

Matt Painter’s team topped the Hawkeyes 77-70 on Friday night, as Trevion Williams had 13 points and 18 rebounds and Jaden Ivey scored 19 points. Williams, embracing his role coming off the bench to complement 7’4″ center Zach Edey, is averaging 12.4 points and a team-high 8.8 rebounds while shooting 59.1%.

The #1️⃣ will appear before Purdue. pic.twitter.com/6MeLIRhtyu

Purdue has quickly shown itself to have one of the most imposing frontcourts in the country with Williams, Edey, and 6’10” freshman Caleb Hurst, who is contributing 8.3 points and 7.4 rebounds per contest while shooting at a 62.2% clip. Purdue leads the nation in effective field goal percentage (62.2%), is second in the country in three-point shooting (44%) and rebound margin (+15.5), and third in overall shooting (53.1%).

Jaden Jones was the only player in double figures with 10 points, as Rutgers shot a season-low 30.9% and sorely missed guard Geo Baker, who sat out a third consecutive game with a hamstring injury. Coach Steve Pikiell is optimistic that Baker, who averages 11.2 points and is one of the team’s top perimeter threats, will be available for this game to take some of the scoring load off Ron Harper Jr.

Harper, who leads the Scarlet Knights in scoring at 14.8 points per game, was held to 5 points on 1-of-9 shooting versus the Illini.

Rutgers has held the upper hand in this series of late, winning the last three matchups after losing the first eight upon entering the Big Ten in 2014. Baker had 19 points, six rebounds, and four assists to power the Scarlet Knights to an 81-76 home win in last season’s lone matchup, while Williams paced the Boilermakers with 21 points and 12 rebounds.

Sportsbooks across Indiana have installed the Boilermakers as double-digit favorites for this game, with the most popular offering being Purdue -12.5 as of 10 a.m. CST. That number can be grabbed at multiple places for -110, including PointsBet, BetMGM, Caesars, WynnBET, theScore Bet, and the Kambi platform powering BetRivers, TwinSpires, and Unibet. DraftKings and Betway have ticked higher to Purdue -13, offering that play at -115.

For first-half offerings, FanDuel has gone rogue in comparison to other books by offering Purdue -7.5 at +104. The most common offering is Purdue -6.5, with WynnBET and theScore the best plays at -105, followed by PointsBet and Caesars at -110. DraftKings and Betway counter with the Boilers -6 at -110.

There is near-consensus on the first-half over/under at 65.5 points, with the -107 at BetRivers, Unibet, and TwinSpires the best play on the over. FanDuel is offering -106 on the under, and the Kambi platform also has a play at 65 points with a -115/-110 split.