Compact Between Pokagon Band And Indiana Runs Deeper Than Gaming 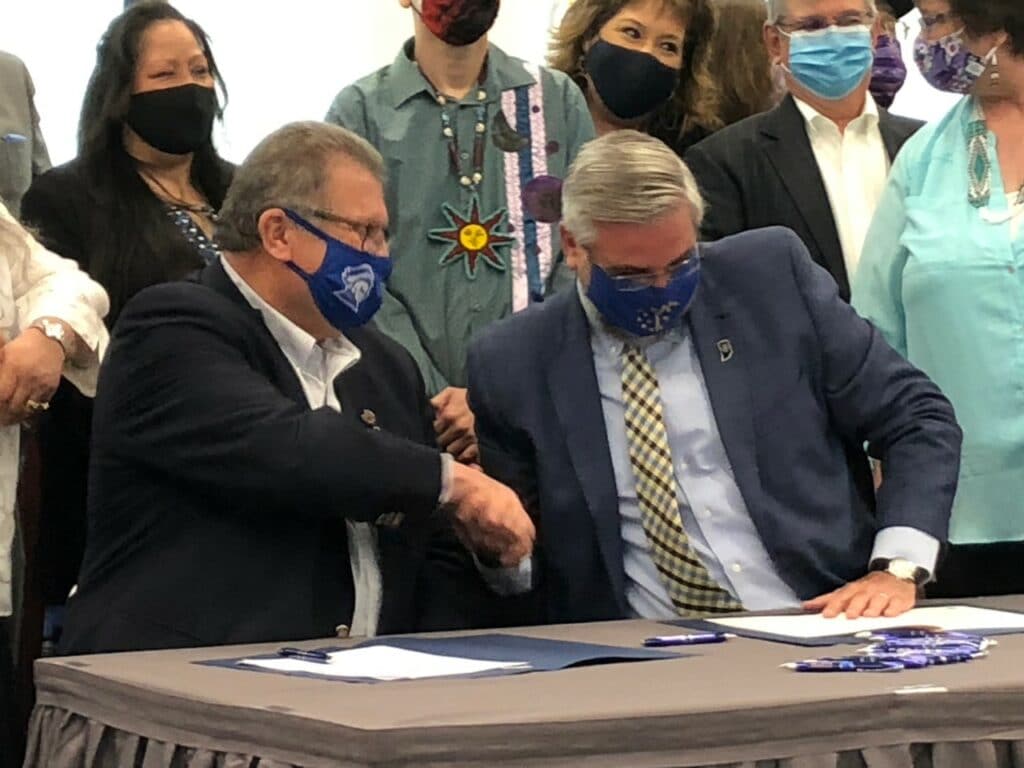 SOUTH BEND, Ind. — The ceremonial signing of HEA 1055 on Tuesday in which Indiana Gov. Eric Holcomb ratified the state’s compact with the Pokagon Band of Potawatomi Indians to include Class III gaming was light when it came to discussing the details of the gaming aspects.

Part of that was by design, because Holcomb’s signature is not the last step in the process for the Pokagon Band to offer table games, slot machines, and sports wagering at the Four Winds Casino in South Bend, amenities that will put them on equal footing with state-licensed casinos. The compact will soon make its way to Washington D.C., where the U.S. Department of the Interior — specifically the Bureau of Indian Affairs — will review the terms and, if everything is in order, approve it at some point over the next 45 days.

The first of its kind agreement between the state and a federally recognized tribe was years in the making. The Pokagon Band requested to open the compact in August 2019, an agreement was reached this January, and the state legislature overwhelmingly approved the bill late last month prior to the governor’s signing. The Pokagon Band, which was already offering Class III gaming at its Four Winds locations in New Buffalo, Hartford, and Dowagiac in Michigan, will pay 8% of its slot machine revenue to the state and continue its 2% payments to South Bend.

But Tuesday also marked something far more significant to both sides — the establishment of a relationship on multiple levels, including one on a government-to-government level expected to serve as the foundation for other mutual benefits.

During his remarks prior to the signing, Holcomb talked of being able to find an instant kinship with Pokagon Band Tribal Chairman Matthew Wesaw. The governor was deliberate in his pace of words — one could sense the connection he made was one he valued as the talks between the two sides progressed and eventually found their way to the final version of the compact.

“We were always upfront and straight and we trusted,” Holcomb said. “That foundation from the very outset in large part led us to this day. I’m forced to call him ‘Chairman’ out of respect. He corrects me and says ‘It’s Matt’ every time, but from the first time we met I knew we were going to be all right.

Wesaw joked that he didn’t make that same connection in the first two minutes, but that by the end of his first meeting with Holcomb “we were good.” After what was supposed to be a typical 15-minute block meeting with a politician extended to a hour, Wesaw left Indianapolis optimistic.

“It’s critical. If you can’t build that trust right out of the gate, it completely slows down the process and maybe even derails it,” said Wesaw, noting the governor called and requested to come to South Bend for the signing. “I had no business on my agenda, I just wanted to get to know him and started building the relationship. And when we walked out of there after that, I thought, ‘This is going to work.’”

Holcomb tabbed Indiana Gaming Commission Executive Director Sara Gonso Tait to represent the state, and the Pokagon Band’s counsel was led by Mike Phelan, who has 30 years of experience in tribal negotiations and has been associated with the Pokagon Band since 2003. Tait said her team retained a law firm with “expertise in this niche area” to help in negotiations and was pleased with the end result.

“What’s interesting about this is, yes, it’s historic and it’s a first for Indiana, but it’s not new,” she said. “The state’s negotiating team took great measures to ensure that we were complying with not only federal law but also the requirements of state law, and it wasn’t lost on us that it was the first agreement between two sovereign states and the importance of that.”

Phelan stressed the importance of negotiating the deal, from the tribe’s perspective, was the state’s willingness to “accept a limited role in our gaming operations in recognition of our sovereignty.” He also said it was easier to negotiate a progression to Class III gaming because the Pokagon Band shared with the state the economic data of its South Bend casino, which opened in January 2018.

“We had been enormously successful with three Michigan casinos and the South Bend operation as a Class II facility,” Phelan explained. “They understood they didn’t need to impose a lot of regulatory oversight, and that was enormously helpful to us and recognition of a government-to-government relationship.”

If the Department of the Interior gives its approval as expected, then the casino logistics of adding table games and software upgrades moves forward. Construction of a 23-story, 317-room hotel that began in September 2019 as part of an expansion plan is ongoing.

Wesaw accepts the casino is tied to the public identification of the Pokagon Band, but he also wants people to realize that the tribe has shared goals building relationships in communities, education, and public health care. Those were points Holcomb ticked off while noting the state and the tribe “were aligned in those goals and moving in the same direction in terms of our vision and our mission.”

“You get involved in those kinds of things and they see, ‘They’re not just about casinos, they’re about this community,'” said Wesaw, citing the Pokagon’s sponsorship of the Four Winds Invitational on the LPGA’s Symetra Tour as an example. “What a lot of people don’t understand is they say, ‘Oh wow, the Pokagons are here.’ No, the Pokagons have always been here.