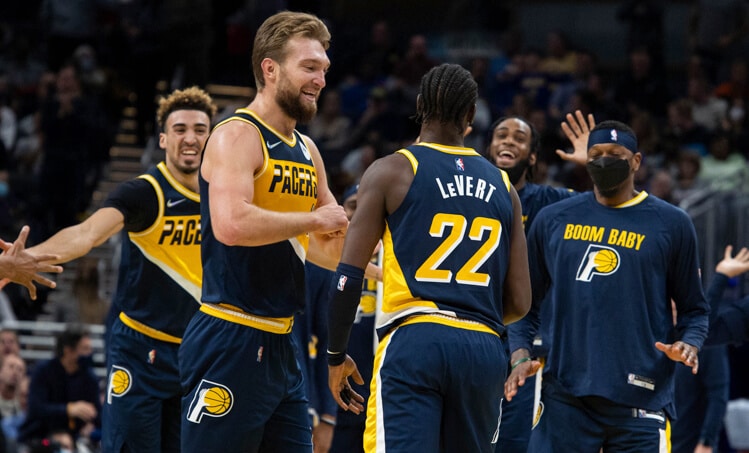 Things were really looking up for the Pacers in January of 2021, a month that saw them trade disgruntled franchise cornerstone Victor Oladipo to the Houston Rockets in a multi-team deal that fetched a younger, equally potent shooting guard in Caris LeVert. But before he could make his Indy debut, LeVert was diagnosed with a serious kidney ailment that caused him to miss serious time, and the Pacers flamed out in the play-in round after finishing the COVID-shortened season a disappointing 34-38.

Still, there was cause for optimism entering the 2021-22 season, in no small part because one of the league’s most highly respected head coaches, Rick Carlisle, was returning to Indiana to reclaim a job he held from 2003 to 2007. Oddsmakers had the Pacers pegged to make the playoffs and perhaps finish as high as second in the Central Division behind the defending champion Bucks. The Pacers face the Bucks on Wednesday night in Milwaukee, where Caesars has installed Indy as unlikely 2-point favorites due to the absence of Giannis Antetokounmpo (COVID protocol) and the uncertainty surrounding fellow All-Star Khris Middleton’s hyperextended knee.

But while the Bulls and Cavaliers got off to surprisingly strong starts, the Pacers sputtered, and by mid-November, FanDuel had downgraded their once favorable postseason odds to -162 on “No” and +128 on “Yes.” And with Domantas Sabonis looking more like a poor man’s Nikola Jokic than the Joker himself, the sputtering has now reached a point where the 12-17 Pacers’ odds to make the playoffs range from +300 at PointsBet to +400 at DraftKings.

“The Cavaliers have come out of nowhere. Charlotte is better than what we expected,” explained PointsBet Senior Trader Sam Garriock. “The depth of the East is much stronger than what we anticipated. You combine that with [the Pacers] being kind of unlucky in close games, and that’s where we are.”

“Their performance, right now, it’s not too good,” observed Adam Pullen, Caesars Sportsbook’s assistant director of trading. “The Pacers are not one of the more popular teams in [terms of betting] tickets. It’s a small-market team. I come from a small-market city in San Antonio. There’s not a lot of excitement about certain teams, and the Pacers fit in that category. The odds will be determined by how the season moves along and there are only a couple teams below them in the standings. But in the East, everybody’s capable, except for a couple of teams, to get in the play-in.”

LeVert for Sexton in the works?

Either way, the situation has gotten sufficiently strained to where The Athletic recently reported that Indiana may look to detonate its middling roster and embark upon a rebuild, as LeVert, Sabonis, and center Myles Turner are all said to be available. Should Pacers brass choose to tinker with the team, the inefficient LeVert appears likeliest to be on the move, with Cleveland reportedly interested in a swap for Collin Sexton, a “terrific scorer” whom Indiana reportedly covets and who would slide in snugly alongside fellow combo guard Malcolm Brogdon.

“LeVert is hurting their product on the floor, but he still has suitors around the league,” said Garriock. “I think they’re going to look to move on from him regardless of whether they move Sabonis or Turner.”

Pullen, meanwhile, is a bit more bullish on the University of Michigan product’s prospects.

“He’s got some injury issues, but I loved him in college and he did well with the Nets,” said the Caesars trader. “I think he’d be a guy who’d be sought after. He’s a mid-teens performer who’s putting up points. If he can stay healthy, I think he’d be an asset to a lot of teams.”

Say buh-bye to a big guy, but which one?

The bigger question involves LeVert’s bigger teammates, Sabonis and Turner. While Sabonis continues to post gaudy statistics, some believe that he can only take the Pacers so far, and that Turner — a far superior rim protector and floor stretcher than the son of Arvydas — could have more upside if he’s no longer forced to play second banana in the paint.

“I personally like Turner as a three-point-shooting big who’s much better suited to Carlisle’s system,” said Garriock. “I think you kind of have to give it a go with just playing one of them. You have two quite valuable players who’d be more valuable in another context. You have Brogdon for another couple years at least. You still have the makings of a 50-win team if they’re able to make a trade. It kind of reminds me of the Raptors when they tried to trade away Kyle Lowry. There is kind of a parallel to building toward contention. Obviously, that’s a pretty tough needle to thread.”

But Pullen’s not so sure about that direction.

“If it were me, I’d keep Sabonis,” he said. “Turner’s a great player, don’t get me wrong, but I feel [Sabonis] adds a little more overall. It’s a tough call. Turner will definitely have suitors, but Sabonis is the one I’d rather keep. When you’re dealing with small-market teams, you get a good player and the time comes to test free agency, and a lot of times they’re gonna bolt. [The Pacers have] some good players on the roster, but they have to figure out what those players are thinking and [whether] they want to stay long term.”

Mike Seely has written about horse racing for The Daily Racing Form and America’s Best Racing, and has contributed pieces on a multitude of topics to The New York Times and Los Angeles Times, among other publications. He can be reached on Twitter (@mdseely) or via email at mseely@bettercollective.com.

Mike Seely has written about horse racing for The Daily Racing Form and America’s Best Racing, and has contributed pieces on a multitude of topics to The New York Times and Los Angeles Times, among other publications. He can be reached on Twitter (@mdseely) or via email at mseely@bettercollective.com.