No. 2 Notre Dame puts its unbeaten season on the line Friday when it faces 19th-ranked North Carolina on the road in a critical clash of ACC teams. 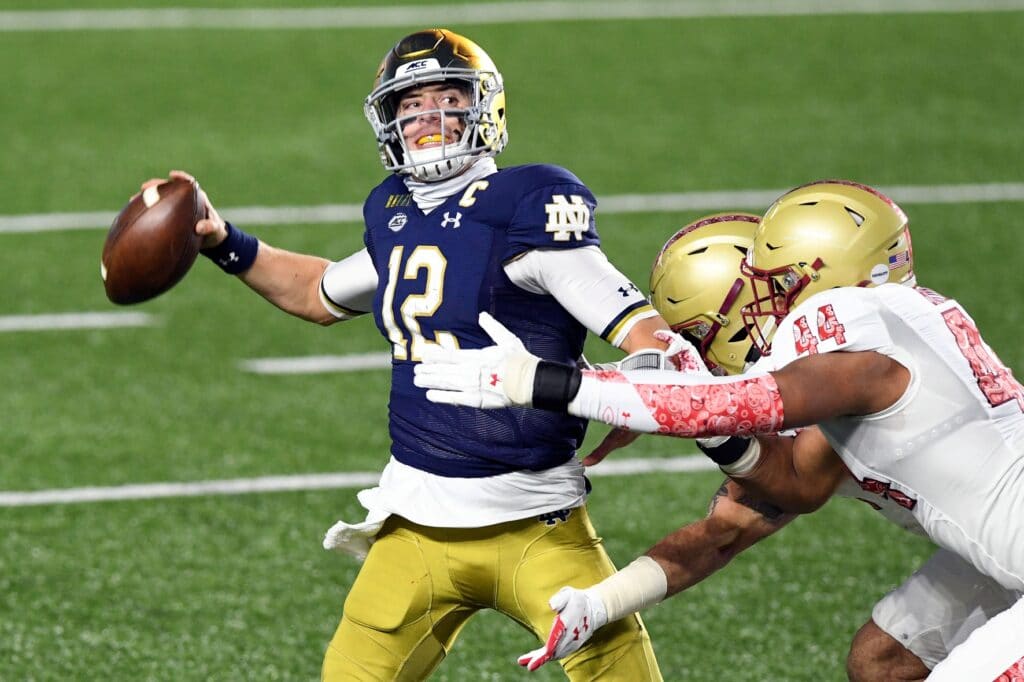 Out to maintain its No. 2 spot in the College Football Playoff rankings and the inside track to the ACC title game, Notre Dame faces arguably the toughest challenge of its stretch run Friday when it faces 19th-ranked North Carolina on the road.

The Fighting Irish (8-0, 7-0 ACC) are on course to appear in the CFP for the second time in three years, having lost to Clemson in the semifinals in 2018 after going 12-0. They have already beaten the No. 3 Tigers this season — 47-40 in double overtime as Clemson played without star quarterback Trevor Lawrence — but a rematch looms in Charlotte next month if both teams win out.

Notre Dame was idle last weekend after winning 45-31 at Boston College on Nov. 14. Ian Book threw for 283 yards and three touchdowns while adding 85 rushing yards and a score as Brian Kelly recorded his 100th career victory with the Irish, tying him for second with Lou Holtz. The Irish are averaging 37.6 points, while the defense is ranked 11th in the country, yielding just 16.6 per contest.

North Carolina (6-2, 6-2) will test its high-powered offense against that Irish defense, entering this contest ranked 10th in the nation in scoring at 43.1 points per game. The Tar Heels have won back-to-back contests, rallying from a 14-point, fourth-quarter deficit to defeat Wake Forest 59-53 on Nov. 14.

Sam Howell threw for 550 yards and six touchdowns, hooking up with Dazz Newsome and Dyami Brown for a combined 18 completions, 352 yards, and four scores. Howell, a sophomore who already has 61 career TD passes, has needed to be that proficient since North Carolina has yielded 30.5 points per game on the season.

Sportsbooks across Indiana see a potentially tight game — PointsBet, DraftKings, and BetRivers have Notre Dame as 5-point favorites, while FanDuel and BetMGM track higher to 5.5 points. Among the quintet, PointsBet, FanDuel, and BetMGM have the standard -110 in each direction, while DraftKings and BetRivers opt for a -109/-112 on their lines.

The Irish can be grabbed on the moneyline anywhere from -195 (DraftKings and BetRivers) to -216 (PointsBet). For those feeling North Carolina can play spoiler to Notre Dame’s CFP hopes, FanDuel is the best play at +172, followed by PointsBet (+170) and BetMGM (+160).

PointsBet, DraftKings, and BetRivers were the only books offering team total over/unders as of 10 a.m. CST on Wednesday. All three were in lockstep on the numbers — 36.5 points for Notre Dame, 31.5 for North Carolina — but varied in the offerings. PointsBet has -115 for both plays while DraftKings and BetRivers countered with -113/-115 for Notre Dame and -105/-127 for North Carolina.

BetRivers was the only book offering full game parlays, both on the moneyline and with the spread and over/under. Bettors could get Notre Dame and over 68 points at +195; Notre Dame and under 68 points at +200. The same plays for the Tar Heels were offered at +370 and +350, respectively. For parlays using the spread and the number, the Irish -5 and the over would return +245 compared to +280 for the under, and grabbing North Carolina +5 had splits of +280 for the over and +240 for the under.

BetRivers and FanDuel are offering 3-way moneyline options (which include draws) in the first half, which is a better play for bettors backing either team than the standard moneyline. Consider: Notre Dame can be had at -137 at BetRivers and -150 at FanDuel on those plays compared to -175 at DraftKings and -180 at PointsBet for two-way play. North Carolina is a +170 option on FanDuel’s 3-way moneyline, which outpaces all other offerings by a significant margin.

BetRivers and FanDuel also have 3-way moneylines offerings for the first quarter, with BetRivers listing Notre Dame at -106 and FanDuel -110. The latter has the Tar Heels +175 to lead after 15 minutes compared to +150 at BetRivers, and +450 for a tie game heading into the second quarter compared to +425 at BetRivers.

DraftKings and BetRivers have a standard first quarter moneyline of -157/+117 with Notre Dame as a favorite. The pair also have an over/under listing of 14.5 points with a -107/-125 split.