It's a big weekend of college football in Indiana as No. 4 Notre Dame tries to knock off No. 1 Clemson, and 13th-ranked Indiana seeks to end a 24-game losing streak to No. 23 Michigan. 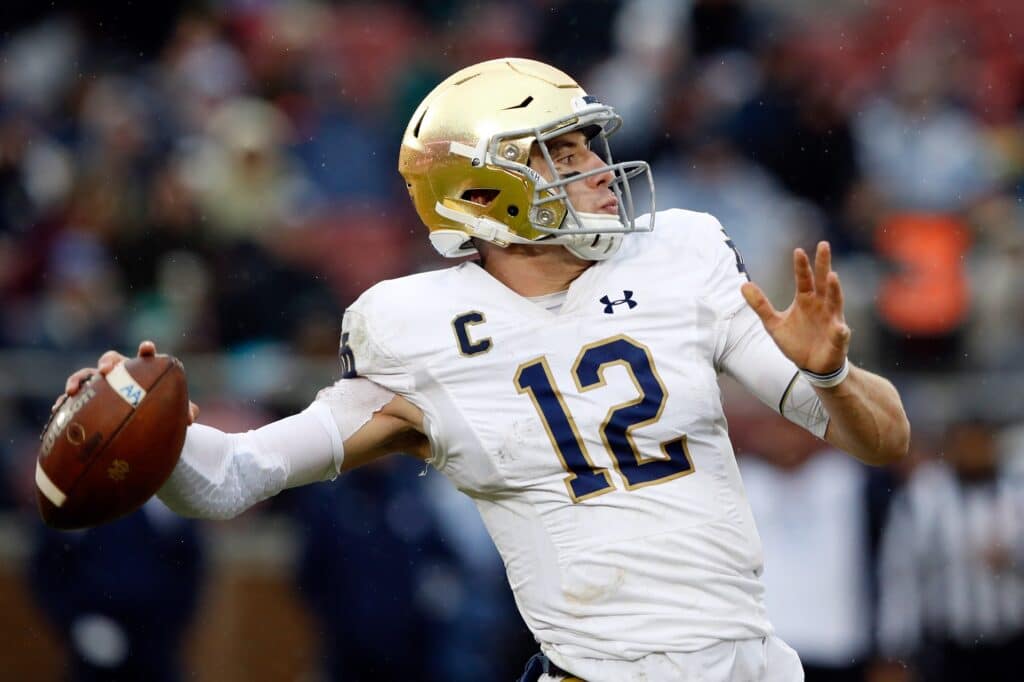 A showdown with both ACC and College Football Playoff implications is set for Saturday in South Bend, where No. 4 Notre Dame will host top-ranked Clemson in a clash of unbeatens.

The Tigers (7-0, 6-0 ACC) and Fighting Irish (6-0, 5-0) are the only unbeatens in the ACC and two of eight FBS teams without a loss that have played a minimum of five games. Clemson will be without starting quarterback Trevor Lawrence, who will miss his second straight game after testing positive for COVID-19, as it pursues a spot in the College Football Playoff semifinals for a sixth straight season.

Notre Dame, which has not defeated a top-ranked team since 1993, lost 30-3 to Clemson in the 2018 CFP semifinal but has put together a standout defense that has limited opponents to 10.3 points per game. The Irish may also have the edge at quarterback. Lawrence is giving way to true freshman D.J. Uiagalelei while Ian Book has thrown for 1,225 yards and seven touchdowns with only one interception.

Though the Tigers had to rally from an 18-point, first-half deficit to defeat Boston College 34-28 last weekend and are playing at Notre Dame, oddsmakers still have them as a solid favorite. Sportsbooks have Clemson favored anywhere from 4.5 points at FanDuel to 5.5 points at DraftKings and BetRivers, with BetMGM and PointsBet splitting the difference.

DraftKings and BetRivers are offering -108 to lay the 5.5 points with the Tigers, while PointsBet is offering -105 in both directions at Clemson -5. BetMGM is offering the standard -110 at that number, while FanDuel has Clemson -108 and Notre Dame -112 at 4.5 points.

There is agreement on the over/under at all five books, established at 50.5 points. DraftKings and BetRivers deviate from the customary -110 offering, with -113 for the over and -108 for the under. The moneyline play for Clemson ranges from -189 at BetMGM to -278 at BetRivers and DraftKings, while PointsBet and FanDuel are offering the best play for Notre Dame at +180.

DraftKings, BetRivers, and PointsBet are currently the only sportsbooks offering team total plays. PointsBet has -121/-110 splits for Clemson at 27.5 points and Notre Dame for 22.5 points, while DraftKings and BetRivers have splits of -117/-113 and -118/-112, respectively.

Hoosiers look to remain on track for Ohio State showdown

Indiana (2-0), which has quietly climbed to 13th in the AP Top 25 on the strength of its season-opening upset of Penn State and last weekend’s victory over Rutgers, will try to remain one of two unbeatens in the East Division of the Big Ten as they host No. 23 Michigan (1-1).

That, however, will be a tall order as the Hoosiers have lost 24 straight games to the Wolverines since a 14-10 victory in 1987. This is just the second time Indiana has been ranked facing Michigan since that victory, with the other occasion a 31-6 defeat in 1988 that started the current skid.

Michigan’s inconsistency, though, following up a rout of Minnesota on the road with a home loss to Michigan State last weekend, may have thrown oddsmakers for a curve. The Wolverines are slim favorites, with FanDuel offering a 2.5-point spread and the other four books installing them as three points better.

DraftKings and BetRivers currently offer the best moneyline play for Michigan at -155, while BetMGM and PointsBet are offering +135 for Indiana to continue its winning ways.

FanDuel also has the tightest first-half spread, installing Michigan as one-half point favorites in contrast to the 1.5-point lines across the other four sportsbooks. The over/under is again split, but FanDuel and BetMGM have lower first-half totals (26.5) compared to BetRivers, DraftKings, and PointsBet (27.5).