Oddsmakers still don't seem completely sold on the Irish, who are home underdogs in a Top 10 showdown versus Cincinnati. 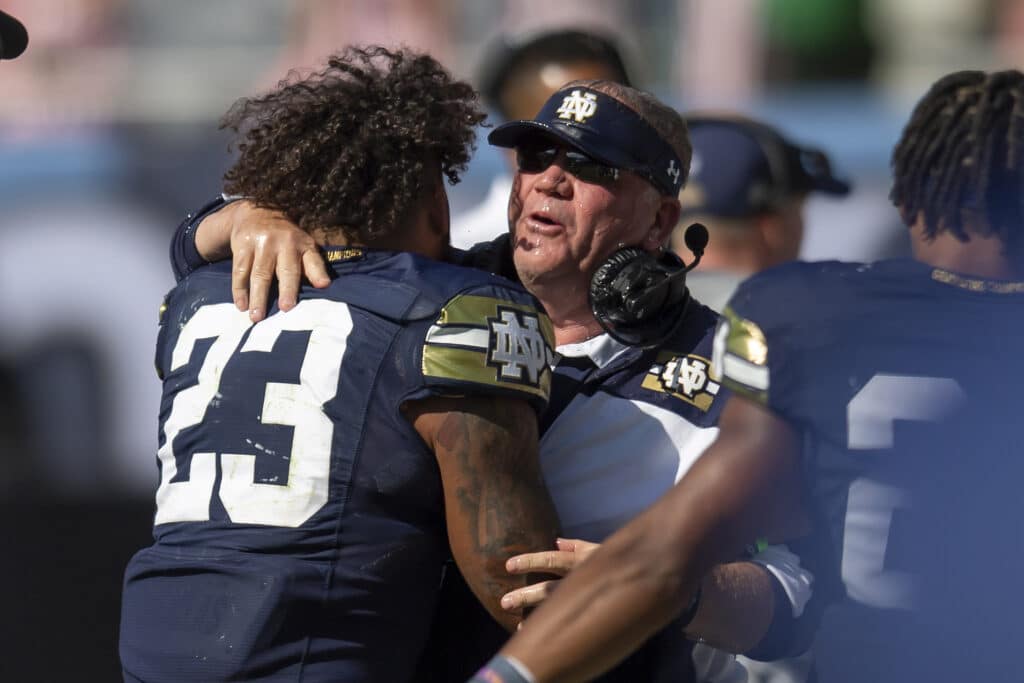 A game with College Football Playoff implications and a huge subplot is slated for Saturday when Notre Dame (No. 9 AP/No. 7 USA TODAY) hosts Cincinnati (No. 7/No. 8).

Considering the Fighting Irish’s status as an independent and the Bearcats playing in the American Athletic Conference — one of the “Group of 5” lesser ones — this contest has the potential to serve as a de facto playoff elimination game when calibrating the CFP rankings and how resumes are stacked against each other throughout the fall.

But there is something more to this matchup, as Notre Dame coach Brian Kelly’s past and present collide. Kelly set the foundation for the current success of the Bearcats’ program, guiding them to a 34-6 record in his three-plus seasons in the Queen City. He went 12-0 with Cincinnati in 2009, leaving for South Bend to take the Notre Dame job before the Bearcats lost to Florida in the Sugar Bowl.

Current Bearcats coach Luke Fickell is looking to complete a road sweep of Indiana-based schools that represent the marquee portion of his team’s non-conference schedule. The Bearcats (3-0) were idle last weekend after a 38-24 victory over the Hoosiers on Sept. 18, with Desmond Ridder rallying them from an early 14-0 deficit by throwing two touchdown passes and running for a third in the second half.

Given the stakes for both schools, and as the lone head-to-head matchup this weekend involving Top 10 teams, the game figures to receive plenty of action among sportsbooks across Indiana. And they are competing to attract bettors with a variety of offerings.

Irish still with something to prove to oddsmakers

Kelly became Notre Dame’s all-time winningest coach last weekend, passing Knute Rockne, when the Fighting Irish (4-0) pulled away for a 41-13 victory over then-No. 18 Wisconsin at Soldier Field in Chicago. The defense forced five turnovers and Chris Tyree had a game-altering kickoff return for a touchdown. Oddsmakers had Notre Dame as roughly a touchdown underdog for that contest, and the Irish are somewhat surprisingly home underdogs for this one.

Jack Coan, who threw for 159 yards and a touchdown in the victory, has split practice time with Drew Pyne this week after leaving the Wisconsin game with an ankle injury in the second half. Kelly said Coan, who has thrown for 986 yards and nine TDs, would start this game if healthy. Pyne finished with 81 yards and a scoring toss versus the Badgers after relieving Coan.

Notre Dame backers can take optimism from the Irish having won their last three games straight up as home underdogs and covering in the last five such contests since a 49-14 loss to Southern Cal in 2014. The most recent such success was Notre Dame’s wild 47-40 double overtime win over Clemson last season as a 5-point underdog.

The spread for Saturday has a narrow range, with PointsBet, Caesars, and WynnBET all offering Notre Dame +2 at -110 Friday afternoon. PointsBet also has a “No Juice” promotion in which bettors can grab that number at +100. Everyone else has the Fighting Irish +1.5 and -110 both ways.

Some variety appears on the moneyline, where PointsBet, Caesars, WynnBET, and theScore offer the best value for Notre Dame supporters at +110. That ticks down to +105 at DraftKings and +102 for the Kambi-powered books of BetRivers and Unibet. FanDuel and BetMGM are offering the Irish at even money (+100) to win outright.

Those intrigued with the “double offerings” also have options to consider with both the moneyline and spread when paired with the over/under. BetMGM is offering +310 for an Irish victory that clears 51.5 points, while FanDuel counters with +290 at 50.5 points. When using the spread, BetRivers has a +265 play for the over and +255 for the under at +1.5.

Some books offer different spreads and totals for such plays, so be sure to compare and contrast them before finalizing any potential wagers.

The one you've been waiting for.

Oddsmakers are expecting a tight first half, with only BetRivers and Unibet differing off the consensus line of Notre Dame plus one-half point. The Kambi-backed platform is offering Notre Dame +1.5 for the first two quarters, but that point is a costly one considering the vig to take the Irish is -136.

BetMGM and theScore are offering -110 for the half-point, with other books ranging from -115 to -121. The first-half moneyline has a wide range, with bigger value for those who opt for the three-way. FanDuel has a +135 listing for that option, and BetRivers/Unibet offering +108. For those who prefer straight-up action, Notre Dame is even money everywhere except PointsBet (-105).