Plenty Of Possibilities This Season For Bettors Interested In Notre Dame

The Fighting Irish could be a challenging proposition for bettors despite their Top 10 preseason status, as a bunch of new players must mesh offensively. 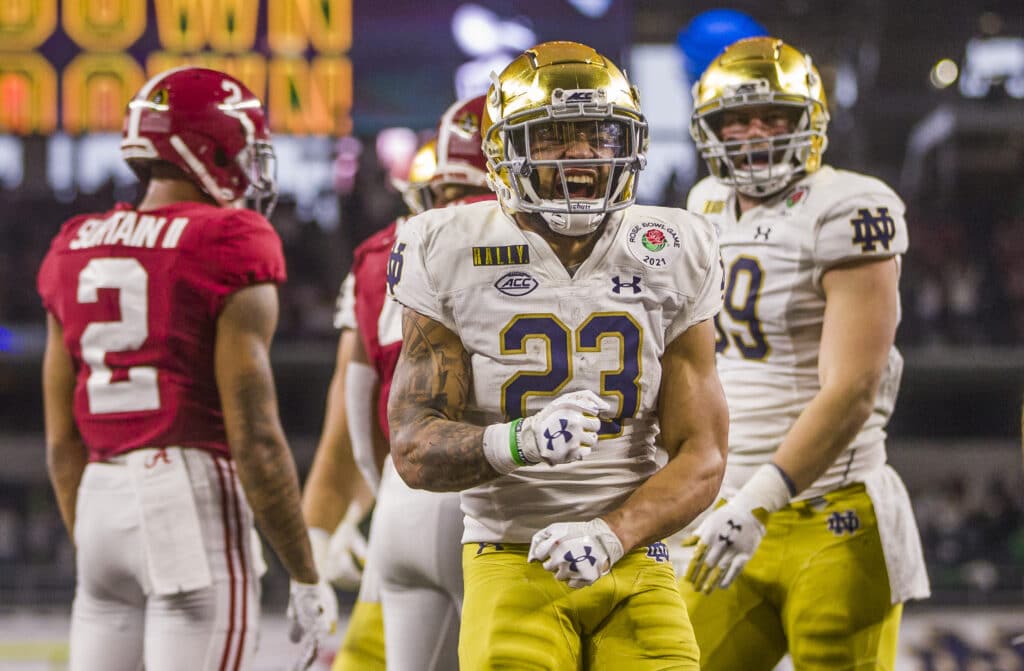 Notre Dame feels like the college football version of a Rorschach test heading into the 2021 season, which makes the Fighting Irish both intriguing and challenging for sports betting purposes.

Brian Kelly’s team is ranked seventh in the preseason coaches’ poll and ninth in The Associated Press preseason Top 25. Due to the logistical quirks of COVID-19 that impacted the 2020 season, the Fighting Irish were essentially an ACC team and wound up winning the conference with a 9-1 mark before losing to Alabama in the College Football Playoff semifinals.

This season, Notre Dame is back to its typical independent schedule, which starts Sept. 5 at Florida State. Clemson is notably absent among its five ACC opponents, but the Irish do have a high-profile matchup versus Wisconsin at Soldier Field in Chicago in late September.

They also have their annual intersectional clashes with Southern Cal, Stanford, and Navy back on the schedule, plus a home contest versus Cincinnati. Kelly coached there from 2007-09 and led the Bearcats to a 12-0 record in 2009, although he did not coach them in the Sugar Bowl after taking the Notre Dame job in the interim.

In addition to the changes to the schedule, there are some notable differences in Notre Dame’s personnel as its offense is in transition. Sportsbooks across Indiana, and in Illinois for the “Chicago subway alumni” across the state line, are providing plenty of offerings for the upcoming season, so line-shopping among multiple operators takes on added importance.

Season Preview: No. 9 Notre Dame turns to graduate transfer QB Jack Coan with the usual expectations that come each season for the Fighting Irish. https://t.co/DsfpZyUksD

After averaging 448.5 yards and 33.4 points last season, the Irish are replacing four starting offensive linemen in addition to having Jack Coan, a Wisconsin transfer, succeed Ian Book at quarterback. Coan did not play in 2020 due to a foot injury, but he threw for 2,727 yards and 18 touchdowns in guiding the Badgers to a 10-4 record in 2019.

Notre Dame is seeking its third CFP appearance in four years, but oddsmakers remain skeptical the Irish can claim their first national title since 1988. Caesars has the shortest odds at +4000, and they stretch all the way to +8000 at FanDuel, Barstool Sportsbook, and BetMGM. In the case of Illinois sportsbooks, the odds may be slightly different since wagering on in-state teams — Illinois, Northwestern, and Northern Illinois for FBS purposes — is not permitted. DraftKings, BetRivers, WynnBET, and PointsBet are all offering +5000 for the Irish to win the national title.

Though a deep longshot, running back Kyren Williams is far and away the best Heisman Trophy hopeful for Notre Dame heading into the season. He ran for 1,125 yards last year — good for fourth in the ACC and ninth in the nation — and 13 touchdowns while averaging 5.3 yards per carry. He added another 313 yards on 35 receptions.

The team’s makeover on the offensive line could prevent a bigger breakout season, something oddsmakers appear to have taken into account when sizing up Williams’ Heisman chances. Multiple sportsbooks have him listed at +10000 or +15000 to win the award given to college football’s best player, while WynnBET is offering a +5000 play for Williams to finish in the top three in voting.

Read the fine print for the over/under win total

With 65 days til the Irish take on Florida State, the countdown continues. Today we honor a play that set the tone for the win against Clemson this past November. #65 Kyren Williams 65 yard visit to the end zone pic.twitter.com/6vVFjfq4WN

Most sportsbooks are offering an over/under of either 8.5 or 9 wins for Notre Dame, but it is important to check what the total includes. For example, BetRivers and Barstool Sportsbook are offering an over/under of 9 wins at -106/-122, but that total excludes bowl and playoff games. WynnBET has a -135/+125 split at 8.5 wins, with the stipulation that Notre Dame must play 12 games.