COVID could cost Chicago its head coach as the Bears bid to get back to .500 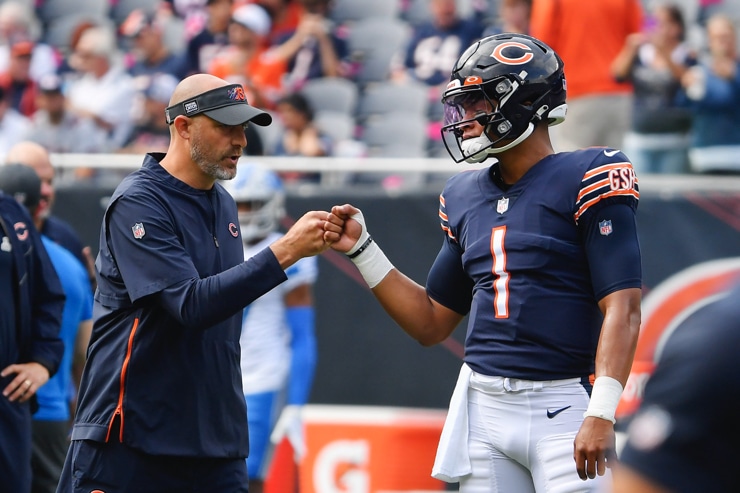 The Chicago Bears look to get back to .500 Sunday when they host the San Francisco 49ers, but that task could prove more complicated if head coach Matt Nagy is unable to be on the sidelines.

Nagy tested positive for COVID-19 on Monday, which has resulted in his watching practices and communicating with the team via Zoom. He requires two negative tests in a 48-hour span to be cleared to return to the Bears, but Nagy said he was unsure of the earliest possible time he could return. If Nagy is not cleared, special teams coach Chris Tabor will run the team versus San Francisco.

Chicago (3-4) has lost back-to-back games and was throttled 38-3 by Super Bowl champion Tampa Bay last Sunday, with the second half a glorified scrimmage after the Bears yielded five first-half touchdowns to Tom Brady and company. The Bears offense has been inconsistent — something expected with Justin Fields under center — and that continued as the rookie was picked off three times and lost a fumble among five team turnovers.

While Damien Williams was taken off the COVID reserve list this week, he is expected to be behind rookie running back Khalil Herbert on the depth chart. Herbert has been one of the few bright spots in the offense since becoming the feature running back in Week 6 and reached 100 yards in the loss to the Buccaneers on 18 carries. He also has topped 100 total yards in each of the last two games and finished with 133 yards from scrimmage last weekend.

Edge rusher Khalil Mack is questionable for this game with a foot injury, however, though defensive lineman Robert Quinn has been activated off the COVID reserve. The Bears failed to sack Brady last weekend and have yielded 1,700 yards and 14 touchdown passes on the season.

The 49ers (2-4) come to Chicago looking to avoid their first five-game losing streak since a six-game skid in 2018. San Francisco was also plagued by turnovers in a 30-18 home loss to Indianapolis Sunday night, committing a season-high four giveaways as Jimmy Garoppolo was picked off twice and lost a fumble.

Garoppolo, a native of Arlington Heights — the potential future home of the Bears — is the starter for the moment as rookie Trey Lance recovers from a sprained knee. His first start with the 49ers came in a 15-14 victory over the Bears at Soldier Field in 2017 as he threw for 293 yards and directed an 86-yard drive that set up Robbie Gould’s game-winning 24-yard field goal with four seconds to play.

With many key players — and also a head coach — in a state of flux, Illinois sportsbooks could be constantly altering offerings right up to kickoff. As is the case every week, a little line-shopping can go a long way toward finding some solid value.

Despite the 49ers recent struggles, the offensive woes of the Bears weigh more heavily in the minds of oddsmakers, who have made Chicago a home underdog for the second straight game and getting points for the fourth consecutive contest overall. The majority of books currently list the Bears +4, with only FanDuel straying to +3.5 while offering -106 on the high-side, field goal hook.

At the higher number, PointsBet has the top value at -107, with the Kambi platform for BetRivers and Barstool Sportsbook both offering -109. DraftKings and Caesars are just off that at -110.

The moneyline has a fairly narrow range, with BetRivers tops at +175 and everyone but FanDuel (+166) offering +170. DraftKings has strayed from a consensus over/under of 39.5 points, ticking one-half point down to 39 at -110 both ways. The Kambi platform of BetRivers and Barstool Sportsbook has a -108/-113 split at the higher number in contrast to the standard -110.

There are multiple options and values for the over/under on Chicago’s total points DraftKings has staked out the low side at 16.5 with a -125/-105 split, while FanDuel offers a flat 17 total on its standard play at -116/-106. For single game parlay players, the number there is 17.5 points at +102/-124. That high-side hook is the standard offer elsewhere, with Kambi offering +108 on the over at 17.5 points compared to even money at PointsBet and Caesars, with the former William Hill the best value on the under at -120.

From Khalil Herbert’s continued success to a little trickery on Halloween, here are our bold predictions for Bears vs. 49ers. https://t.co/FdGSAExlmq

While the Kambi platform had not listed player props as of 1 p.m. CDT on Friday, other books did have offerings on Chicago’s skill players. There is consensus on Darnell Mooney’s receiving yards (42.5), with FanDuel’s -114 edging out the standard -115 play. FanDuel also has the low ground on Cole Kmet at 25.5 yards compared to 26.5 elsewhere. Its 41.5 yards for Allen Robinson is the high total versus 40.5 yards at other books.

DraftKings, PointsBet, and Caesars all list Fields’ over/under for rushing yards at 30.5, with DraftKings a -110/-120 split, Caesars flipping that, and PointsBet content to straddle the number at -115. For the rookie QB’s passing yards, FanDuel again stands out at 188.5 yards, one lower than the others.

With Fields having thrown just two touchdown passes in 131 attempts, books have moved off the standard over/under of 1.5 down to 0.5, with Caesars offering the best over at -220. For those wanting to fade the rookie signal-caller, DraftKings has the best number at +190 for no scoring tosses. For those pondering Fields throwing an interception, the play is more balanced as both DraftKings and Caesars have a -135/+105 split for 0.5 interceptions.

There is some notable variance in offerings for anytime touchdown scorers among Bears players. Herbert can be grabbed as high as +170 at PointsBet and +150 at DraftKings. Robinson has the narrowest band, ranging from +250 at FanDuel to +275 at DraftKings, while Mooney’s value ranges from +265 at Caesars to +300 at DraftKings.

There is a notable split on Kmet — FanDuel and DraftKings list +380 in contrast to Caesars (+490) and PointsBet (+450). Those considering a wager on Fields scoring a touchdown can find a +390 listing at FanDuel, with the next-closest being +330 at PointsBet. Williams is back on the board, with a band from +290 at DraftKings to +390 at FanDuel.

In terms of first-half lines, DraftKings is the one on its own for the spread at Chicago +3 with a -115 offering. Everyone else is on the low-side hook at +2.5, ranging from +100 at FanDuel and Caesars to -113 at Kambi. The over/under is 19.5 points everywhere but Caesars, which has opted for a flat 20 at -110 in both directions. On the lower number, DraftKings has the best value on the over at -105, while PointsBet is +100 to the under.

The Bears’ team total has two numbers with different challenges. FanDuel is on an island at 9 points with a +110/-130 split, with everyone else on a high-side TD hook at 7.5 points. PointsBet and DraftKings are offering even money as the best over, with Barstool and BetRivers the best under at -118.