Irish Have Key Tilt Versus UNC; Purdue and Indiana Both Road ‘Dogs 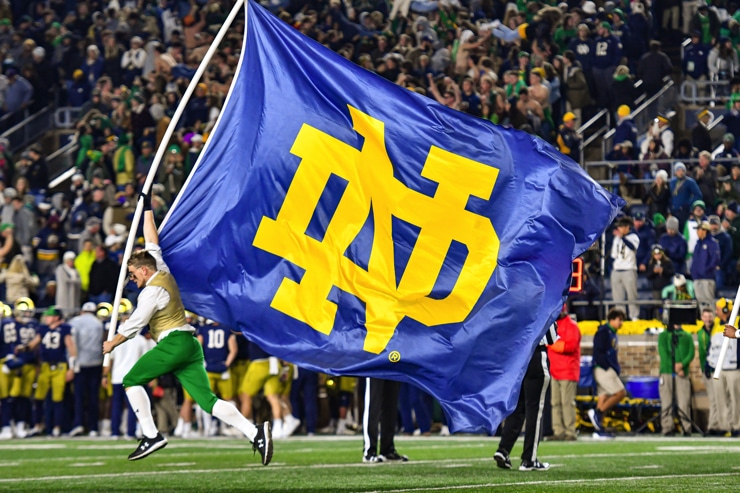 The first College Football Playoff rankings will be released Tuesday night, and though the Fighting Irish (6-1) are among a bevy of one-loss teams, the season has been unpredictable enough that a single loss may not eliminate them from making a CFP appearance for the second straight year and third time in four. They moved up two spots in both national polls this week and could enter the top 10 of either or both polls with a victory — depending on how the showdown between No. 6 Michigan and No. 8 Michigan State plays out.

Notre Dame is coming off a 31-16 victory over Southern Cal last Saturday, in which Kyren Williams rushed for a season-high 138 yards and also caught six passes for 42 yards. Jack Coan was efficient, completing 20-of-29 passes for 189 yards and a touchdown, but he also has just three scoring tosses in his last four games after throwing eight in the first three.

The Irish will have to make one change defensively for this game, as safety Kyle Hamilton is out with a knee injury. Hamilton, who leads the team with three interceptions, suffered the injury when he fell awkwardly trying to push USC receiver Drake Landon out of bounds in the first quarter of last weekend’s win. DJ Brown is expected to start in place of Hamilton.

Hamilton’s absence could prove advantageous for North Carolina (4-3), which boasts one of the top quarterbacks in the nation in Sam Howell, who has thrown for 1,851 yards and 18 touchdowns. The Tar Heels are opening a run of three straight games against ranked opponents that also include matchups with No. 13 Wake Forest and 17th-ranked Pittsburgh.

They are coming off a 45-42 win over Miami in their last game two weeks ago, as Howell threw two touchdown passes and added another two scores rushing. He finished with a season-low 154 passing yards but has thrown for two or more TDs in six straight games, helping North Carolina rank 18th in the country in scoring at 36.9 points per game.

Sportsbooks look to have their offerings finely tuned for this game, with nearly all establishing Notre Dame as 3.5-point favorites, with the number at -105 available at DraftKings and TheScore Bet. Separating itself is the Kambi platform powering Unibet and BetRivers, which has opted for Notre Dame -4 at -107.

The moneyline has a somewhat narrow band, with the best offering, -170, found at WynnBET, DraftKings, and TheScore. The over/under is a healthy number, ranging between 62 and 62.5 points. On the lower number, BetMGM has -110 for the over, while BetRivers and Unibet are straying from the standard -110 on the higher number with a -109/-112 split.

Kambi again is striking out on the first-half spread, but its Notre Dame -1.5 offering comes with a -125 price. Everyone else is in consensus on the Irish -2.5 for the opening two quarters, with BetMGM the sole outlet at -110. BetMGM also has the best standard moneyline offering at -145, though a three-way play at BetRivers and Unibet can be had for -127 and at -130 at WynnBET.

Boilers look to bounce back at Nebraska

Back among the unranked after a one-game stint at No. 25, Purdue (4-3, 2-2 Big Ten West) looks to keep itself in the division hunt versus last-place Nebraska (3-5, 1-4). The Boilermakers’ schedule toughens significantly after this contest, with games versus No. 8 Michigan State and fifth-ranked Ohio State, the latter coming on the road.

Purdue was pummeled at home by Wisconsin 30-13 last weekend, giving up 291 rushing yards and allowing 20 unanswered points in losing its 15th straight game to the Badgers. Aidan O’Connell threw for 200 yards and a touchdown but was also intercepted three times, but Boilermakers coach Jeff Brohm is sticking with him as starter. Jack Plummer, who has thrown for 862 yards and seven TDs without an interception, likely will see some playing time.

The Cornhuskers, who won last year’s meeting 37-27 at Purdue, have dropped four of five following a 30-23 loss at Minnesota on Oct. 16. It has been feast or famine for Scott Frost’s team — its three wins have come by a combined 136-17 count, while Nebraska has been outscored 138-110 in its defeats. Quarterback Adrian Martinez has accounted for 1,006 total yards and seven TDs in his three matchups with Purdue but has a 1-2 record in those games.

Sportsbooks across the state are trying to woo Boilermakers bettors, offering a high-side hook of +7.5 across the board. DraftKings stands out as the best offering at -105 versus -110 elsewhere. For those thinking Purdue can eke out a road win, FanDuel, BetMGM, theScore Bet, and WynnBET all have +250 listed.

Purdue +4 is the most common play for the first half, with DraftKings offering even money, though BetRivers, Unibet, and FanDuel are all offering +4.5 at -115. Those interested in the moneyline can get +205 on the standard play at DraftKings, though the 3-way on Kambi pays out +210. The BetRivers-Unibet duo are on an island for the first half over/under at 27.5 points with a drastic -103/-129 split. The most agreed upon number is 26.5, with theScore the lone book offering -110 both ways at that number. BetMGM has -110 in both ways at 25.5 points.

While Notre Dame is looking to crack the Top 10, Indiana (2-5, 0-4 Big Ten East) is likely happy to be playing an unranked opponent as it looks to end a three-game losing streak in a Saturday matchup at Maryland (4-3, 1-3 East). The Hoosiers were manhandled 54-7 at then-No. 5 Ohio State last weekend, completing a disastrous three-game gauntlet against Top 10 teams in which they were outscored 98-22.

Tom Allen’s team has little margin of error in a bid to become bowl-eligible, and the schedule still includes a road game versus the sixth-ranked Wolverines and rivalry game at Purdue. Though Indiana has won both its matchups with unranked teams, its lone road win in three tries was a 33-31 victory over a sub-.500 Western Kentucky team.

The Hoosiers could be turning to a third-string quarterback for this game as Jack Tuttle was forced out of the loss to the Buckeyes with a foot injury and is day-to-day. Donaven McCulley and Grant Gremel were a combined 4 of 10 for 39 yards in relief of Tuttle, and Indiana finished with just 128 yards of total offense.

Most books have established Indiana as 5.5-point underdogs, though DraftKings (+100) and WynnBET (-110) opted for Hoosiers +5 as of Friday morning. At the higher number, BetRivers and Unibet are both offering -109.

FanDuel’s listing of +184 on the moneyline is the best play, with the majority offering +180. The over/under has a near-consensus on a challenging number of 49.5 points. Those willing to risk it against the high-side hook and take the over can grab it at -109 on the Kambi platform, while DraftKings and Caesars are trying to woo bettors to the under at -105. WynnBET is on its own at 50.5 points with a -110 listing both ways.

For first-half lines, Indiana +3 is the main offering, with -105 available at DraftKings, Caesars, BetMGM, theScore Bet, and WynnBET. There is value on the three-way moneyline at WynnBET, which is offering +200 for Indiana, while others on the standard play max out at +155.

The over/under ranges from 24 points at DraftKings, BetMGM, and theScore to 25.5 at PointsBet and WynnBET. On the low side, -120 is being offered for the over at all three places, while the high-side hook at 24.5 points can be grabbed at -105 at FanDuel. At 25.5 points, WynnBET (-115) edges out PointsBet (-121) for those interested in the under. TheScore (+115) and DraftKings (+110) are both offering Indiana’s team total over/under at 10.5 points for the first two quarters.