Illinois Racing Board Approves Dates In 2021 For All Three Tracks 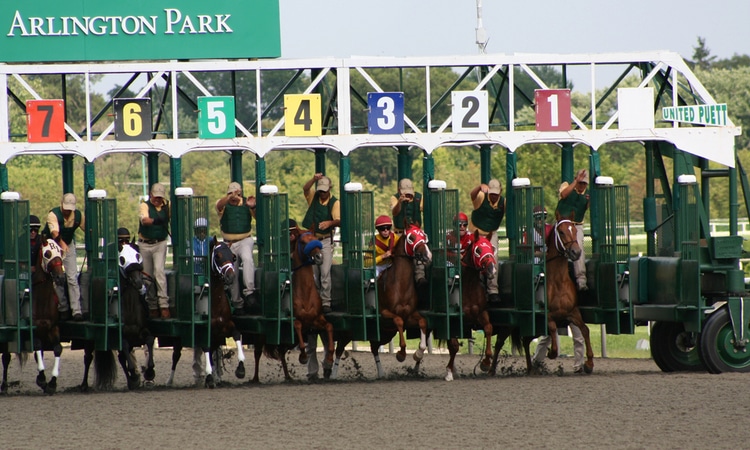 Arlington will have 68 days of live racing and 220 total host programs for its 94th season of racing, highlighted by the return of Grade I stakes races the Beverly D. and the newly named Mister D., which was formerly known as the Arlington Million. Hawthorne Race Course will have 50 race programs and 145 total host programs as the two tracks submitted a joint schedule to the IRB. Fairmount Park will have 53 thoroughbred racing dates with seven races per day minimum.

Hawthorne has already been approved for a sports wagering license, and its partner PointsBet launched mobile sports betting operations in Illinois last Saturday. As allowed in the gaming expansion bill Gov. JB Pritzker signed into law in June 2019, Hawthorne will have retail sports betting available at off-track betting facilities in Oakbrook Terrace, Crestwood, and Prospect Heights in addition to the track just outside the Chicago city limits in Stickney.

Fairmount Park, whose sportsbook will be operated by FanDuel, is still in the applicant process for a sports wagering license, and both have applied for racino licenses. Hawthorne was deemed “preliminary suitable” for its racino in July when the Illinois Gaming Board granted the track its sports wagering license.

Though Arlington is the only one of the three tracks to have a contract with the horsemen currently in place, the future of racing at the Arlington Heights location has been in question since William Carstenjen, the CEO of Churchill Downs Incorporated — which owns Arlington International — raised the possibility of not running races there in 2021 and potentially selling the track during a conference call on CDI’s second-quarter earnings in late July.

IRB Chairman Daniel Beiser expressed concern over Carstenjen’s comments to Arlington President Tony Petrillo before the vote to award the race dates, telling Petrillo, “When comments are made like that, it does create just a level of uncertainty for all the men and women that are the backbone of the horse racing industry, not just in Illinois, but everywhere there is horse racing, to plan for their future.”

Petrillo said on multiple occasions that “it is our intention to conduct the race meet,” noting that Carstenjen may not have known Arlington and Hawthorne had agreed to work jointly on the 2021 race schedule. Petrillo also stated Carstenjen said the sale of the property was “not definitive” during the conference call and said “there is some time to sort this out” and that “these conversations have come up daily within the confines of the strategic teams at Churchill Downs.”

Churchill Downs surprised many in August 2019 when it opted not to pursue a racino license, citing the additional taxes on the racing purses, and Carstenjen confirmed during the July conference call Arlington would withdraw its application for a sports wagering license. CDI owns 61% of Rivers Casino in nearby Des Plaines, which operates the BetRivers sportsbook that has both retail and mobile sports wagering available.

The decision not to pursue the racino license was a contributing factor to the acrimonious negotiations between Arlington and the ITHA as they dragged out six months past when the two sides were supposed to have a signed deal in place, according to the law.

One commissioner enters, two exit, and barely a quorum

There were also personnel moves on the racing board since the previous meeting in July. Commissioner Thomas McCauley, who along with IRB Executive Director Dominic DiCera was instrumental in keeping Arlington and the ITHA at the negotiating table, resigned, while Commissioner Arlene Mulder was not reappointed in her role.

The departures left only five positions filled on the 11-member board, one short of a quorum, and Gov. Pritzker filled one of those vacancies Monday by naming Leslye Sandberg commissioner. A former equestrienne, Sandberg is also a PATH (Professional Association of Therapeutic Horsemanship) certified riding instructor and is currently the managing partner of Valkyrie Ventures LLC, which specializes in HVAC design and manufacturing.

Sandberg is the second commissioner appointed to the IRB this year by Pritzker, with Leslie Breuer added July 1.