Indianapolis Colts Kick Off Preseason Without Carson Wentz This Sunday

The game against the Carolina Panthers won't feature the injured quarterback, but his health is being closely watched by sportsbooks. 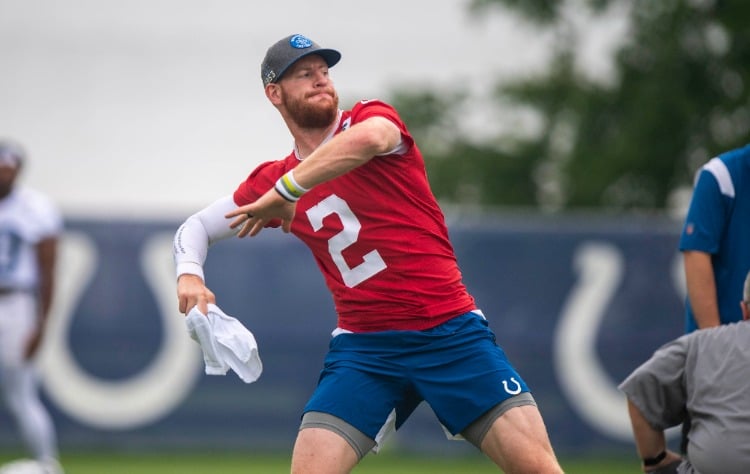 When new Indianapolis Colts quarterback Carson Wentz had surgery on his left foot, it was announced he’d be out from anywhere from five to 12 weeks.

As a result, the Colts odds at Indiana’s sportsbooks took quite a tumble. They were +110 to win the AFC South at Caesars, and that number ballooned to +170 in wake of the surgery news. The Tennessee Titans were the beneficiary of this movement, as they went from +110 to -135 to take the division crown.

But now? Wentz is trending in the right direction, and plenty of pundits expect him to be behind center come Week One at home against the Seattle Seahawks.

As a result, those odds over at Caesars … well, they’re off the board at Caesars. At DraftKings, the Colts have edged back down to +140 and the Titans are at -105. So while the Colts odds haven’t come all the way back, they’re about halfway there.

And if word comes out Wentz will be ready for Week One — or close enough to Week One — it wouldn’t surprise to see the odds settle back down to where they were pre-surgery.

The same is true for the Colts’ Super Bowl chances; before the Wentz news, the team was +2500 on BetRivers to take home the Lombardi trophy. Post-news, the odds ballooned to +4000. Today, they sit at +3300.

The Colts — sans Wentz, of course — begin their exhibition campaign Sunday afternoon at home against the Carolina Panthers. The Colts come into the game at -1.5 on the point spread and -120 moneyline favorites over at FanDuel.

Those odds could move a few points each way depending on what kind of announcement Frank Reich makes concerning the rest of his starting crew, but for now, no word on how much time the first-team offense is going to see with quarterbacks Jacob Eason and rookie Sam Ehlinger behind center.

Who else might the Colts be trotting out in this first exhibition game?

Second-year running back Jonathan Taylor is hoping to expand upon his objectively awesome rookie year, and oddsmakers across the sportsbook landscape are willing to listen. For instance: Over at PointsBet, Taylor is -115 to accumulate over 1450.5 combined rushing and receiving yards. Last year, he had 1,468 while playing in 15 games, 13 as a starter.

As far as the wide receiver corps go … well, you’re going to be scrolling a long time before you see those lead-the-league props pop up. Michael Pittman Jr. and T.Y. Hilton are the best the Colts have to offer with +12500 odds at BetMGM to pace the league in receiving yards.

Unsurprisingly, Wentz’s props aren’t much better, at +10000 to lead the league in passing yards.

A few other notable props