Indiana became the fourth state to surpass $3 billion in sports betting handle in the post-PASPA era, with bettors placing more than $316.7 million in wagers in the month of March according to the state's Gaming Commission. 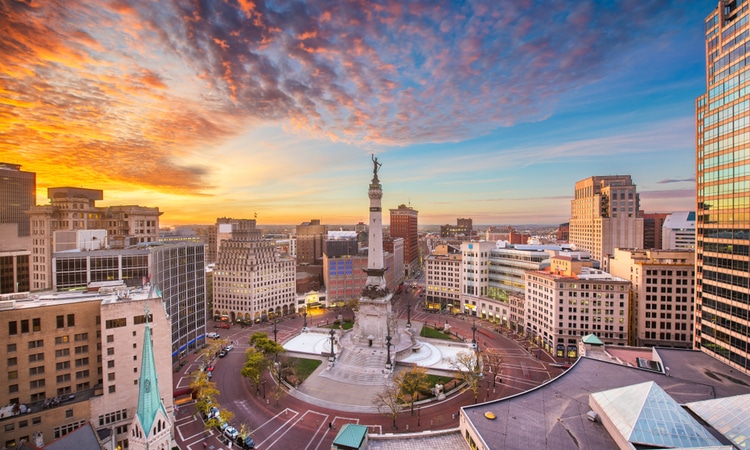 Indiana joined a select club in sports betting handle Monday, becoming the fourth state to clear $3 billion in the post-PASPA era after the Indiana Gaming Commission released its figures for March.

The $316.7 million wagered was the second-highest monthly total in the Hoosier State’s history since accepting its first bets in September 2019. It was a 15.6% improvement from February’s $273.9 million, but well off January’s record-setting handle of $348.2 million.

Overall, Indiana has accepted more than $3.1 billion worth of wagers, joining Nevada, New Jersey, and Pennsylvania as the only states to clear $3 billion. Illinois will also be part of the club when that state’s Gaming Board releases its numbers for March.

Operators bounced back in terms of revenue, posting an 8.32% win rate to generate nearly $26.4 million in revenue — the second-highest monthly total in state history and also trailing only January’s benchmark ($29.3 million). The state tax coffers received more than $2.5 million in March, nudging the total receipts since launch to over $24 million.

March Madness and parlays play a role in handle bump

Sportsbooks across the state saw a bump in action with the entire NCAA tournament played in Indiana and centralized in Indianapolis. Overall, more than $160.7 million was wagered on basketball in March, a 26.4% month-over-month increase from February’s total of $127.2 million.

Parlay wagering again proved popular as the second-highest category by handle, drawing over $77.5 million in bets. In the first three months of the year, bettors in the Hoosier State have placed more than $230 million worth of parlay wagers in search of big paydays. The catch-all category of “other,” which includes hockey, golf, boxing, MMA, and so on, generated nearly $62.6 million in wagers.

The IGC does not break out revenue figures by sport in its monthly reports.

In terms of mobile wagering, William Hill made the most of March Madness as its $879,577 in revenue was its highest posted since entering Indiana in October via Tropicana Evansville. It generated a handle of more than $9.5 million, which ranked fifth among mobile operators in the state and was a 69% increase from February’s total of $5.6 million.

DraftKings again ruled the roost when it came to handle and revenue, continuing its run as the highest handle generator in the state every month since entering. The Boston-based sportsbook reached nine figures for the fourth consecutive month at more than $111.2 million, and the nearly $8.5 million in revenue easily outpaced FanDuel — at nearly $6.8 million — to prevent its archrival from claiming the top revenue spot for a second straight month.

FanDuel, however, did post its highest handle since entering Indiana with nearly $91.3 million. BetMGM again rounded out the podium positions for handle, racking up more than $39.4 million for March, and finished just shy of $3.6 million in revenue — its second-highest total in Indiana.

PointsBet posted its best month in revenue in Indiana with close to $1.7 million from a handle of more than $13.1 million that ranked No. 2 for a single month since taking its first bets in the Hoosier State in March 2020. Despite having its third-best month in Indiana with nearly $9.2 million in handle, BetRivers‘ sixth-place finish in that category was its lowest since launch.

Both “second-skin” operators — theScore and Unibet — recorded all-time monthly highs in handle, while theScore also had its best month for revenue. The Canadian-based sportsbook, linked to Ameristar Casino, totaled $263,111 in revenue while finishing less than $4,000 shy of $3 million in handle, and Unibet, part of Horseshoe Hammond, reached $2.1 million as it cleared $2 million for the first time.

The allure of watching March Madness at a sportsbook was evident throughout the state as the 14 retail locations — when including horse racing tracks and their affiliated off-track betting locations — generated more than $37.5 million in handle. They also generated nearly $4.8 million in revenue, posting a win rate of 12.78% as French Lick Resort was the only retail sportsbook not to top the state win rate at 7.42%

Hollywood Casino in Lawrenceburg reached eight figures in handle for the sixth consecutive month ($10.8 million), and its nearly $1.7 million in revenue paced all retail operators. Ameristar Casino, also a Barstool Sports set-up, was second in handle with nearly $6.2 million in wagers and $560,418 in revenue.

Indiana’s two horse racing tracks — Indiana Grand and Harrah’s Hoosier Park — also turned in strong performances with help from their Winner’s Circle OTBs. The duo combined for more than $1.2 million in revenue from nearly $10.3 million in wagers, with the Winner’s Circle in downtown Indianapolis — near the center of NCAA tournament action — collecting $283,113 on more than $2.5 million in bets placed.