Five properties in the state have been given authorization to go live with betting, with three of them to open their respective books Sunday.

Indiana’s entry into the world of sports wagering is about to begin.

Three casinos are expected to begin betting on Sept. 1, with two more greenlit for the following days. Indiana gaming regulators have so far only approved five properties to go live with wagering. Fourteen properties in total have been awarded a temporary certificate of authority for sports wagering by the state, according to the Indiana Gaming Commission.

While retail book openings in the Hoosier State will make history, bettors in other legal markets have spoken — the internet is their prefered method of wagering on sports.

Online/mobile is where the action is at, but those platforms likely won’t be ready for several more weeks, possibly by the end of September. It seems almost a lock for online gambling in Indiana to be live by the end of October. At Wednesday’s Indiana Gaming Commission meeting, for which Hoosier State Bets was in attendance, IGC Executive Director Sara Tait said that no company has formally submitted a request to go live with mobile. However, Tait indicated that could be forthcoming soon, as the state has already awarded temporary vendor licenses to some firms for online betting.

Still, all eyes will be on the retail books for the next several weeks. Here’s a look at the five that have been granted approval their go-live approval by the IGC.

The Penn National-operated casino will begin sports betting Sept. 1. PN announced earlier this month that the sportsbook will be “conveniently located” near the Stadium Sports Bar and Grill and main entrance to the property. The casino will have some local sports legends in attendance for the big opening.

Penn National property, so it will be a Kambi-run book (tech, risk-mgmt) based on current agreements.

The casino located about an hour’s drive from Louisville, Kentucky partnered with Rush Street Interactive, owner of the Play SugarHouse brand in Pennsylvania and New Jersey, for both retail and online/mobile betting. The brick-and-mortar sportsbook opens Sept. 6. It’s unclear who will place the ceremonial first bet at its opening. The casino might go the route of having an everyday patron place the first bet.

The book will be located at the north end of the family-owned casino. It will have several kiosks and betting windows, which is standard for the industry.

The Penn National casino, located a short drive from Cincinnati, will begin sports betting Sept. 1, according to the IGC. The casino will have its “grand opening” on Sept. 5.

Former Cincinnati sports stars Anthony Munoz of the Bengals and Tony Perez of the Reds will be at the casino, but it’s unclear if it’s for the Sept. 1 opening or the Sept. 5 grand opening. The sportsbook will be located in the Hops House 99 sports bar. It will be equipped with the standard self-service kiosks as well as betting windows with human staff (new jobs).

We know you're excited, and so are we! Our #Sportsbook Grand Opening is next Thursday, September 5th! We'll see you soon. 🏈😁 #SportsBetting #SportsBets

Caesars’ Horseshoe Hammond, the highest grossing casino in the state in terms of gaming win, thanks largely to its location near Chicago, was approved for wagering starting Sept. 4.

Caesars recently put out a rendering of the highly anticipated sportsbook. 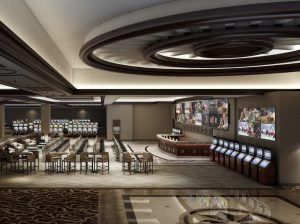 It’s unclear if the casino has a more full-fledged sportsbook in the works.

The Caesars racino, located outside Indianapolis along the interstate, will commence wagering on Sept. 1. It will be the closest sportsbook to the state’s capital city until Caesars Winner’s Circle OTB in Downtown Indianapolis opens. The Indiana Grand book will be in the middle of the casino. 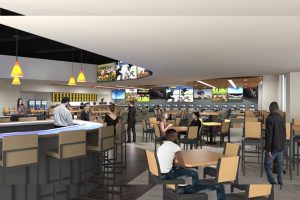 Per the IndyStar, other books have plans that are still pending regulatory approval:

UPDATE: Winner’s Circle OTB Indy, Blue Chip, and Belterra all were given approval by the IGC on Friday for the respective retail launches.