Irish Back After Bye; Purdue Looks To Justify National Ranking 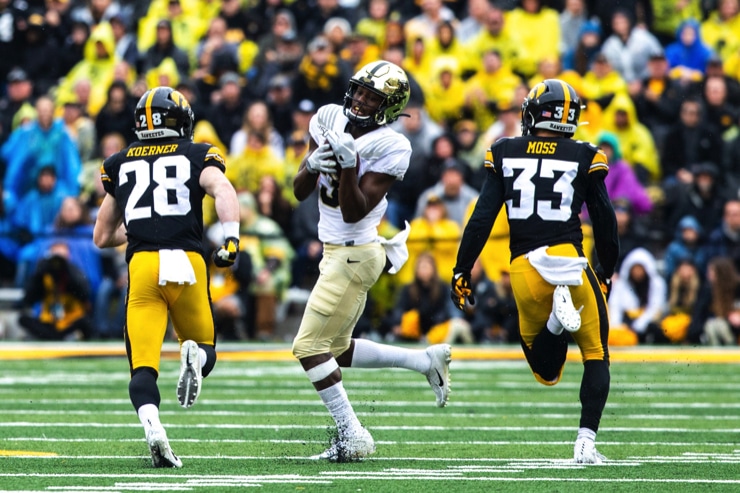 Looking to begin its push for a high-end bowl game, No. 13 Notre Dame opens a three-game homestand Saturday night with the renewing of its intersectional rivalry versus Southern Cal.

While the Fighting Irish (5-1) can be considered in the hunt for the College Football Playoff as a one-loss team, there are still six unbeaten schools ranked higher than them. Additionally, fellow one-loss teams No. 4 Alabama and No. 5 Ohio State look to be a cut above Brian Kelly’s team when using the eye test. Still, practically every bowl would readily extend a bid to Notre Dame, and the next three weekends in South Bend — games against North Carolina and Navy follow this one — could help keep the luster on the team’s record.

The other Power 5 FBS schools in Indiana are also in action, with Purdue — now ranked 25th in the Associated Press poll — looking to justify that ranking at home versus Wisconsin in a critical matchup of two West Division teams in the Big Ten, and the Hoosiers at home versus the fifth-ranked Buckeyes in an intradivisional showdown in the East.

There is plenty of action being offered by sportsbooks across Indiana, and betting lines for all three matchups are offering the potential to challenge bettors. That puts a premium on line-shopping to find the best plays and value for your sports wagering dollar.

Irish out to keep Jeweled Shillelagh versus Trojans

Normally one of the premier games of the college football season, this edition sees Southern Cal (3-3) making the trip as one of the most difficult teams in the country to figure out. Clay Helton was fired two games into the season following a loss to Stanford, and the Trojans are 2-2 under interim coach Donte Williams.

The Trojans were idle last weekend after a 42-26 home loss to Utah, and they have allowed 129 points in their three defeats. Still, there is plenty of talent on the offensive side of the ball. Kedon Slovis has thrown for 1,519 yards and nine touchdowns and has a standout receiver in Drake Landon. The 6-foot-5 junior already has 64 catches for 832 yards and five TDs and is coming off a 16-catch, 162-yard effort versus the Utes.

The Irish are also coming off a bye, continuing a season of close wins with a 32-29 victory at Virginia Tech on Oct. 9. Jack Coan shook off a first-half benching to lead Notre Dame on game-tying and game-winning drives in the fourth quarter, the latter capped by Jonathan Doerer’s 48-yard field goal with 17 seconds remaining.

Coan, who finished 9 of 12 for 108 yards and a touchdown, will start this game but continue to split snaps with freshman Tyler Buchner. Coan has thrown for 1,208 yards and 10 TDs, but both he and Buchner have struggled to move the ball at times due to inconsistent offensive line play. That has also affected running back Kyren Williams, who had 1,125 yards last season but only 370 through the first six games while failing to notch a 100-yard effort.

Most sportsbooks are offering Notre Dame as 7-point favorites, perhaps holding their powder on a hook on either side until closer to kickoff. PointsBet and DraftKings are the best plays there at -105, and the Kambi platform used by BetRivers and Unibet is offering -109.

Two books, WynnBET and FanDuel, have opted to offer the low-side hook with Notre Dame -6.5 as of 9:30 a.m. CDT on Friday morning, with WynnBET offering -110 compared to FanDuel’s -122.

The Kambi platform stands out for the moneyline, with Notre Dame -250 as the best listing and the most common offering at -260. The over/under has a tight band of 57.5 or 58 points, with FanDuel and WynnBET again breaking away and theScore Bet joining them. The trio are on the lower number, with FanDuel offering a -114/-106 split and both WynnBET and theScore listing the standard -110. At 58 points, DraftKings has the best over play at -105, while -110 can be played at multiple spots for those who like the under.

Those interested in playing the over/under for Notre Dame’s team total can opt for BetMGM‘s 33.5 points with a -105/-120 split or a host of books at 32.5 points. WynnBET is offering -110 both ways, making it the best value for the over and joint-best with DraftKings for the under.

The first-half lines, though, are where bettors will be sweating if they opt in for those plays. Everyone is offering the high-side hook, with Notre Dame as 3.5-point favorites for the first two quarters, though Caesars and BetMGM are the only two willing to play it at -110. For the moneyline, the standard ranges from -200 to -225, but WynnBET has Notre Dame -150 on the three-way offering as a better option.

David Bell could have gone anywhere, but he drew a 3-to-5 hour circle around Indianapolis. He was staying close to home.

Why? His handicapped grandmother.

"I wanted her to come to as many games as possible." #BoilerUp https://t.co/BbwsHKI1QJ

After adding some chaos to the Big Ten by stunning then-No. 2 Iowa 24-7 on the road last weekend, Purdue (4-2, 2-1) has the opportunity to put itself in a favorable spot in the West Division race at the expense of Wisconsin (3-3, 1-2). The Boilermakers are also using a quarterback rotation with Aidan O’Connell, Jack Plummer, and Austin Burton, but their success depends on the trio getting the ball to David Bell.

Bell finished with 11 receptions for 240 yards and a touchdown versus the Hawkeyes, with O’Connell doing most of the passing damage, as he finished with 370 yards while figuring in all three scores. Bell has 38 catches for 679 yards in just five games, topping the 100-yard mark in four of them.

Wisconsin (3-3, 1-2) is seeking a third straight win after grinding past Army 20-14 last Saturday. Braelon Allen had a 33-yard touchdown run and finished with 108 yards for the Badgers, who rank 26th among FBS teams with 207 rushing yards per game. They are also 26th in scoring defense at 19.33 points allowed per contest, which could pose a challenge for a Purdue team that has averaged 15.8 points in its last four games after scoring 79 in wins over Oregon State and UConn to open the season.

Despite the marquee win last weekend, oddsmakers still aren’t totally sold on the Boilers. Purdue is either a 3 or 3.5-point underdog, depending on the book, with BetMGM, Caesars, theScore, and PointsBet offering the higher number at -110. DraftKings, BetRivers, and Unibet, meanwhile, are all trying to woo bettors on the flat field goal at -105.

BetMGM is trying to entice overs team total play with a -120/-105 split at 17.5 points, with 18.5 the more common offering elsewhere and WynnBET listing -110 in both ways for those interested in the under.

The first half has a larger range in spreads, with Caesars offering Purdue +2 at -110 as the high-side outlier. For the confident Boilers backers, BetMGM, theScore, and WynnBET all have even money at Purdue +0.5. Jeff Brohm’s team can also be grabbed at +175 on the 3-way moneyline at WynnBET compared to the top standard offering of +125 found there as well as Caesars and DraftKings.

The first-half over/under makes for some deliberation since the low side of 19.5 points has a -120 listing on the over at both FanDuel and DraftKings, while Caesars and theScore are offering -110 both ways on 20 points.

After taking Ohio State to the wire last year in Columbus, a repeat performance is not expected for Indiana (2-4, 0-3), which played then-No. 10 Michigan State tough in a 20-15 road loss last weekend. The Hoosiers have taken their lumps against ranked teams this year, going 0-4 and losing those contests by a combined 116-45.

Most oddsmakers are again asking bettors to consider the hook, with Indiana 21.5-point underdogs at a host of places, though BetMGM stands out at -110 compared to Kambi (-117) and FanDuel (-118). WynnBET has opted for the low-side hook at +20.5 (-110), while those offering the flat touchdown spread of Indiana +21 all have it currently listed at -110.