While college basketball remains a popular sport in Indiana, fans of schools in bordering states Illinois, Kentucky, and Ohio may be making more crossovers of state lines for wagering purposes this season. 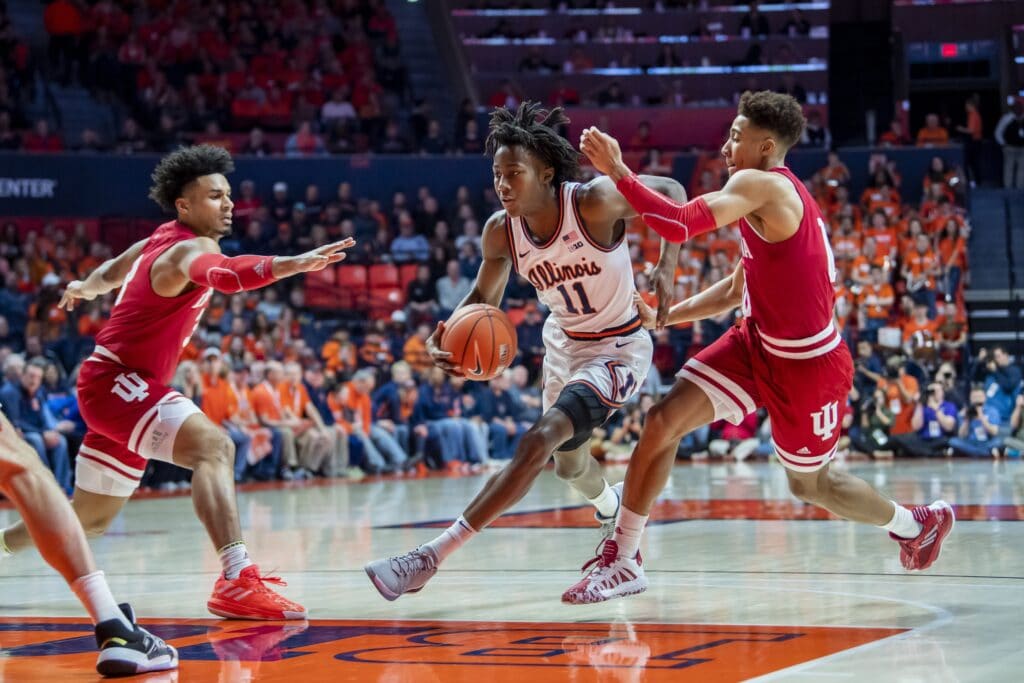 College basketball — which was the first major sport severely impacted by the COVID-19 pandemic with the cancellation of the 2020 NCAA Tournament — returned Wednesday to a season starting in mostly empty arenas as teams scramble to fill limited non-conference schedules with hopes of having “March Madness” next spring.

Indianapolis is expected to be the site of the entire 2021 NCAA Tournament should it be played, but in getting to that point, Indiana will be an exciting place for bettors — more so for out-of-state residents who can take advantage of remote registration to enter Indiana and place futures wagers and bets on alma maters and favorite schools throughout the season.

The Hoosier State is bordered by Illinois, a state that has carved out an exemption for college sports wagering — bets cannot be placed on futures offerings or games involving in-state teams. Two other bordering states — Ohio and Kentucky — do not have legalized sports betting and have schools that play in high-major conferences.

Given the projected success of schools residing in these three states — Illinois and Kentucky were ranked eighth and 10th, respectively, in The Associated Press preseason top 25 poll, while Ohio State checked in at No. 23 — and also strong fan support, it would not be surprising to see sportsbooks across Indiana get a bump in handle from these three teams in addition to the customary following of Indiana, Purdue, Notre Dame, and Butler should this season be played out successfully.

The Illini (21-10) would have made their first NCAA Tournament appearance since 2013 last season had it not been for the pandemic. Brad Underwood’s team returns four starters, most notably guard Ayo Dosunmu and 2020 Big Ten freshman of the year Kofi Cockburn, and Illinois is in the mix with Iowa and Wisconsin among conference favorites this season.

BetMGM and FanDuel are the only operators offering markets on the Wooden Award, which is given to the best college player in the country. Dosunmu has the second-shortest odds at +400 on BetMGM and is joint-second at +500 at FanDuel. The 7-foot Cockburn is a bit of a longer reach, listed 10th at BetMGM (+1600) and tied for ninth at FanDuel (+3500).

Vying to make headway in the Big Ten with Illinois are Indiana, Ohio State, Purdue, and Northwestern. Both in-state schools have NCAA Tournament aspirations but are also longshots to crack the upper echelon of the conference, while the Buckeyes rate higher. Ohio State is rated fifth-highest at BetRivers to win the Big Ten at +1000, followed by Indiana (+2000) and Purdue (+3000).

BetMGM and PointsBet both offer +2000 for the Hoosiers to win the conference tournament, while the former has the Boilermakers at +2500 and the latter at +3000. Ohio State, meanwhile, is a +900 offering at BetMGM and +1000 option at PointsBet to cut down the nets at the Big Ten tourney.

FanDuel is bullish on Indiana’s chances for a deep NCAA Tournament run, offering +600 for the Hoosiers to make the Final Four and +2800 to win it all. That stands out considering BetMGM and BetRivers both have them +900 to make the Final Four and +3500 and +4000, respectively, to win the tournament. PointsBet also has Indiana at +4000 to win its sixth NCAA Tournament title.

Ohio State has +650 odds to make the Final Four, while FanDuel and BetMGM counter with +700. Those two books, though, have shorter odds on winning the tournament at +2800 and +2500, respectively, while BetRivers and PointsBet list the Buckeyes as a +3000 option.

Northwestern, which is entering its fourth season since its lone NCAA Tournament appearance in 2017 and coming off an eight-win season, is a substantial longshot across the board regarding both Big Ten and Final Four hopes. BetRivers has the Wildcats at +50000 to win the Big Ten, while PointsBet has a similar offering for the conference tournament. For those dreaming big, BetMGM has them at +150000 to win the NCAA Tournament.

The Wildcats (25-6), who won the Southeastern Conference title outright last season, are looking to reach the Final Four for the first time since the 2014-15 team got there 38-0 and was upset by Wisconsin in the National Semifinal. As is the case most seasons in Lexington, Ky., coach John Calipari must replace his entire starting five from last season with a highly heralded group of freshman learning their craft as they dream of entering the NBA as soon as possible.

Given the Wildcats are usually a better team by March then they are in November and December, buying early on them could prove beneficial if history repeats itself. The best regular-season SEC title offering goes to BetRivers (+160) followed by FanDuel (+120), while BetMGM (+180) and PointsBet (+170) have Kentucky as the favorite to win the conference tournament.

Those offerings are similar at the national level as a Final Four team. BetRivers has the Wildcats at +150 to make their 18th appearance, with FanDuel offering +200 and BetMGM +250. There is a similar bandwidth for the offerings of Kentucky winning its first title since 2012 and ninth overall — BetRivers is again most bullish at +900, followed by BetMGM (+1100) and then FanDuel and PointsBet (+1200).

Other teams of regional interest

Notre Dame (20-12) looks to be in a rebuilding season following the graduation of star forward John Mooney and two other starters, with BetRivers (+4000) and FanDuel (+5000) putting the Irish in the bottom half of teams in the 15-team league. PointBet has Mike Brey’s team as a similar longshot for the ACC tournament crown.

Butler (22-9), a likely NCAA Tournament team last season, is in a similar rebuilding mode in the Big East following the graduations of Kamar Baldwin and Sean McDermott, putting the Bulldogs as a +10000 longshot at BetRivers to win the conference and +10000 option to win the conference tournament according to PointsBet. They are a +1700 listing at FanDuel to make the Final Four, and +2400 at BetRivers.

DePaul, in a similar place as it looks to end a 17-year NCAA Tournament drought, is also a +10000 pick to win the Big East tournament at PointsBet and a +10000 offering for the regular-season crown at FanDuel. The Blue Demons are a +2500 option there for a Final Four spot compared to +7400 at BetRivers.

Dayton (29-2), which would have been a Final Four contender last season but is moving on without 2020 Wooden Award winner Obi Toppin, is in the mix for the Atlantic 10 title. The Flyers are offered at +330 by FanDuel, which also has them a +1200 pick for the Final Four. BetRivers has Anthony Grant’s team at +2400, while BetMGM splits the difference at +1800.