Contenders Or Pretenders? The Hoosiers Could Take Bettors On Wild Ride

Led by quarterback and Heisman sleeper Michael Penix, an experience-laden Indiana Hoosiers team has the chance to burst on the national scene and vie for Big Ten supremacy. 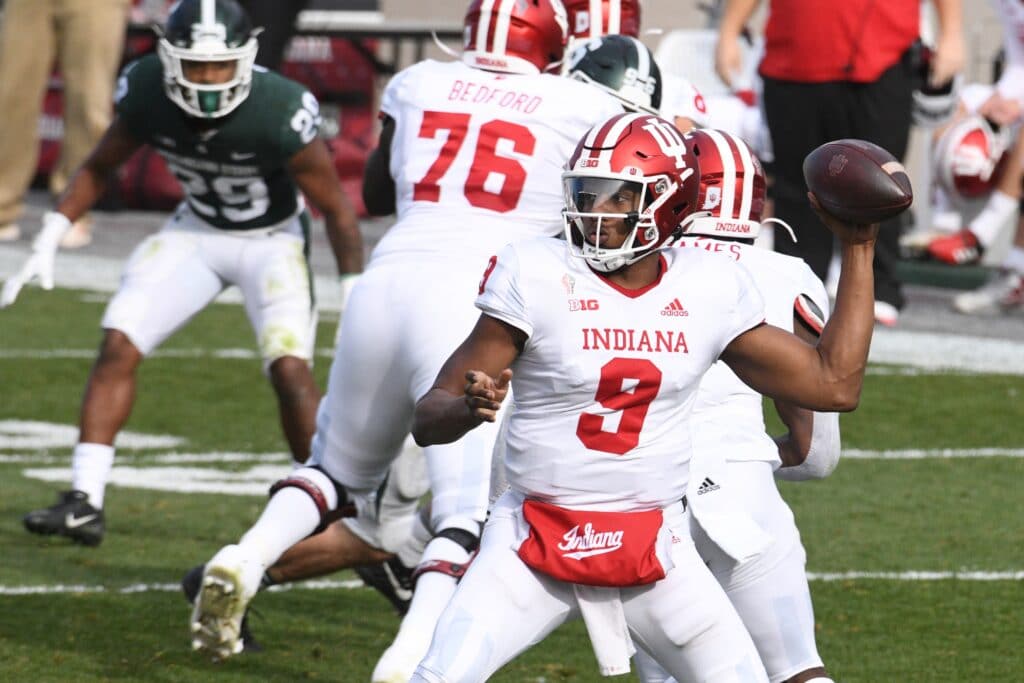 It is very easy to be an afterthought in the East Division of the Big Ten Conference.

Start with the fact Ohio State annually takes up nearly all of the oxygen getting preseason hype as a potential national champion and odds-on favorite to represent the conference in the four-team College Football Playoff. At the next level, there is a “tradition” factor specific to the division — when one thinks college football on Saturdays, the mind gravitates to the blue blood programs of Michigan and Penn State.

Neither is the powerhouse of yesteryear, but they still move the needle and attract attention at the national level. Dig a little deeper, though, and one arrives at the Indiana Hoosiers.

Tom Allen’s team turned a few narratives on their heads in 2020. Indiana opened its season with a riveting upset of a Penn State team ranked in the Top 10 and also sent Michigan back to Ann Arbor with a double-digit defeat. The Hoosiers were the only Big Ten team to play the Buckeyes within a single-possession margin, and while they lost the Outback Bowl to Ole Miss, quarterback Michael Penix had to sit that one out due to injury.

Fully recovered from a torn right ACL, Penix is among 17 starters back for Indiana, which is ranked 17th in both polls and begins its season Saturday with a tricky contest at Big Ten rival Iowa. The Hoosiers also have an intriguing statement game at home versus No. 8 Cincinnati on Sept. 18, and a victory could keep them in the thick of the CFP rankings as they navigate conference play.

Here are some of the offerings from sportsbooks across Indiana for the state’s flagship school.

A look at how in demanding more precision from receivers, IU QB Michael Penix Jr. has used his experience at the Manning Academy as a tool for growth this camp #iufb https://t.co/sOwoeFg5eV

There is little question Penix has the capability to be a top-tier quarterback. He has thrown for 3,039 yards and 24 touchdowns over 12 games in the last two seasons while completing 61.6% of his passes, and Indiana was 10-2 in those contests. The issue has been durability for the junior quarterback — he tore the same ACL in the third game of the 2018 season and suffered a season-ending shoulder injury in the sixth game in 2019.

Penix’s injury-prone past has led oddsmakers to justifiably put him deep among Heisman hopefuls, but that also could prove to be beneficial for bettors bullish on him leading the Hoosiers to that next level. Penix is being offered at a wide range to win the Heisman Trophy, with +4000 at DraftKings on the low end and +10000 at WynnBET as the longest.

In between, the numbers are +5000 at BetRivers, Barstool Sportsbook, and Unibet; +6000 at FanDuel; +6600 at BetMGM; and +7500 at Caesars. Wynn also is offering Penix at +3000 to finish in the top three for Heisman voting, a somewhat attractive go-between in contrast to the customary all-or-nothing Heisman plays.

It is important to remember that sportsbooks offering regular-season over/under win totals exclude any potential victories by Indiana in the Big Ten title game, any bowl game, and any potential College Football Playoff game. Only wins from the 12-game schedule are counted.

Every sportsbook has settled on 7.5 wins as the pivot point for the Hoosiers, but nearly all of them have different prices. It should also be pointed out Indiana has posted eight regular season wins just twice since 1990 — in 1993 under Bill Mallory and in 2019 when Penix battled through injuries. The Hoosiers have not posted a nine-win season since their last Rose Bowl appearance in 1967.

DraftKings and FanDuel are the most straightforward, offering the standard -110 in either direction, while competitors have some interesting variance. BetMGM’s split is +110/-130, while the Kambi-powered platform for BetRivers, Unibet, and Barstool is offering +105/-129. Caesars has a -105/-115 split, and WynnBET checks in with -110/+100.

In terms of marquee home-and-away matchups for Big Ten play, Indiana will host Ohio State but also must travel to Happy Valley and the “Big House,” where Penn State and Michigan will be eager to avenge their 2020 defeats. The Hoosiers play two of their three conference crossover games on the road and close the season at Purdue in a bid to keep the Old Oaken Bucket.

Indiana could be labeled a sleeper pick to win the East Division, slotting third behind the Buckeyes and Nittany Lions across sportsbooks. The Hoosiers can be grabbed at +1000 at PointsBet, FanDuel, and DraftKings, with the Kambi platform close behind at +1200.

Indiana is considered a longshot to win the College Football Playoff, ranging anywhere from +10000 at DraftKings to +30000 at WynnBet. BetMGM is offering the Hoosiers as a +2000 play to qualify for the four-team playoff, while FanDuel has a Yes/No option of +4000/-8000 to reach the CFP.