Illinois A Tournament Favorite, But Loyola Could Lurk In Second Round

The two teams representing Illinois in the NCAA tournament -- the top-seeded Illini and No. 8 seed Loyola -- could square off in the second round and send bettors in Illinois over the state line into Indiana to wager on that potential showdown. 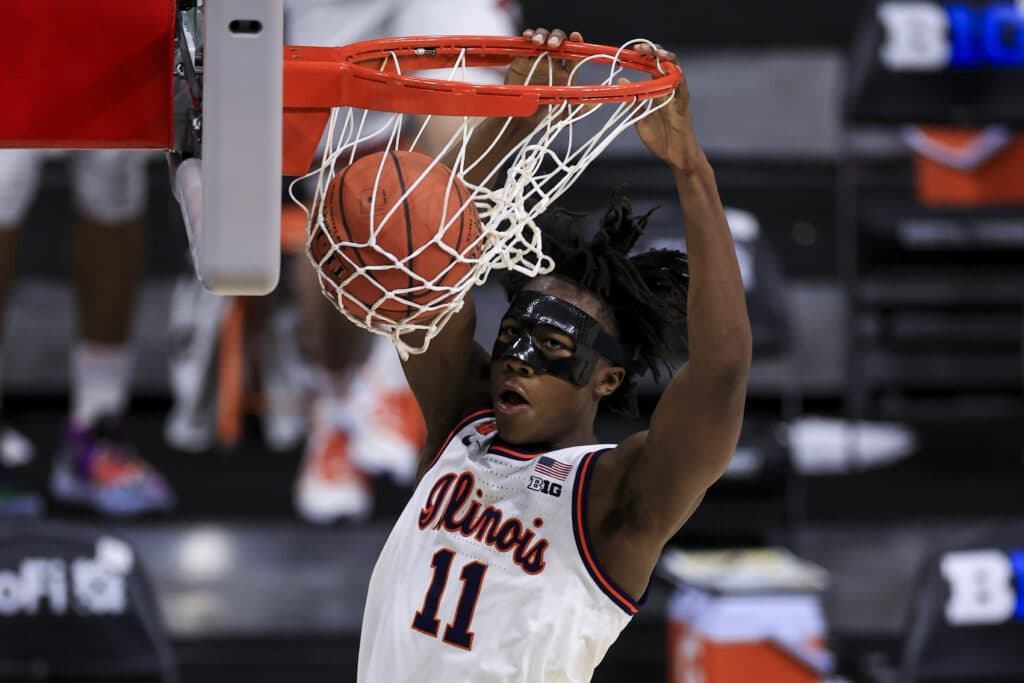 There is no question Indiana will be the center of the sports betting universe starting Thursday night as four different locations in Indianapolis — along with Assembly Hall at Indiana University in Bloomington and Mackey Arena at Purdue University in West Lafayette — host the entire 68-team March Madness while trying to keep COVID-19 at bay.

But another hot spot may be the first series of rest stops and exits crossing from Illinois into Indiana so bettors from the Land of Lincoln can place legal wagers on the Fighting Illini and Loyola of Chicago, which they could not make inside their own state’s borders. That could especially hold true if both teams win their first-round games to set up a round of 32 showdown Sunday.

After losing the 2020 NCAA tournament to the COVID-19 pandemic, there is undoubtedly a pent-up demand to wager on the 2021 edition. Bettors in both Illinois and Indiana will be wagering on March Madness for the first time since sports betting was legalized in their respective states. How it unfolds will be anyone’s guess, but the exemption that prohibits wagering on the Illini in Illinois may be the Hoosier State’s gain if they make a deep run.

After winning the Big Ten conference tournament title and finishing second to fellow top seed Michigan in the regular season, there is no question Illinois (23-6) is worthy of its No. 1 seed in the Midwest Region. The duo of guard Ayo Dosunmu (20.7 points per game) and 7-foot center Kofi Cockburn (19.6) is as good as any pair you will find in the country, and they get offensive support from guard Trent Frazier, Andre Curbelo, and Adam Miller.

In terms of advance metrics, the Illini rank seventh and fifth, respectively, in terms of offensive and defensive efficiency. Illinois averages 119 points per 100 possessions and yields only 88.3 points. In terms of shooting, Brad Underwood’s team is in the top 25 both inside the arc (55.3) and outside it (37.6), and its effective field goal percentage of 55.6 is good for 16th among Division I teams.

If there is one potential weakness for the Illini, it is their lack of forcing turnovers. They rank 319th of 353 Division I teams when it comes to percentage of possessions forcing turnovers (16.0) and 317th in non-steals turnover percentage (8.1). It just means Illinois is a passive team defensively but one that can also funnel opponents into the 7-foot Cockburn to help alter shots.

When considering the “eye test,” Illinois pounded the Wolverines at home and took a combined four of five games from No. 2 seeds Iowa and Ohio State. All six of its losses came to NCAA tournament teams, most notably fellow No. 1 seed Baylor.

Most books have the Illini as a second or third overall option to cut down the nets at Lucas Oil Stadium at various offerings. FanDuel and William Hill are most bullish on them at +600, with Kambi platforms BetRivers, Unibet, and DraftKings following at +700. BetMGM is also +700, while PointsBet lurks slightly further back at +725.

The Illini are also still a plus-money option to emerge out of the Midwest Region, with William Hill at +125, FanDuel offering +145, and the Kambi platform a +150 option.

Can Loyola be a spoiler?

"'Hi, you Ramblers, are we ready?' Sister Jean begins.

After winning the Missouri Valley Conference tournament, Loyola of Chicago (24-4) is in the field of 68 for the first time since its magical run to the Final Four as a No. 11 seed in 2018. While many sports betting fans in Illinois may curse the selection committee for putting the state’s only two teams in the field in the same sub-region and voiding the betting fun of a potential second-round showdown, the eighth-seeded Ramblers could give the Illini problems should they get past Georgia Tech.

Porter Moser is still on the Loyola sidelines, and Cameron Krutwig has evolved from freshman contributor on that 2018 squad to go-to senior center. The Ramblers are darlings of advanced KenPom metrics, finishing ninth — only six spots behind the Illini — on the strength of a defense that ranks first in the nation in holding opponents to 86.7 points per 100 possessions.

The offense is also fairly efficient, ranking 49th at 110.4 points per game, because Loyola shoots 58% inside the arc. Krutwig averages team highs of 15 points and 6.7 rebounds while shooting 57.9%, while guards Keith Clemons, Lucas Williamson, and Braden Norris have combined to hit 123 3-pointers.

Oddsmakers, though, envision a difficult path for Loyola simply to get back to the Final Four. FanDuel leads the way at +1100, and William Hill has the Ramblers a +1200 option, which is joint-third for the region but also a distant one considering No. 2 seed Houston is second at +220. The Kambi platform lists Loyola a +1400 option to emerge from the Midwest Region.

What about the host state?

For a state that prides itself on basketball, Indiana has only one representative in the NCAA tournament — Purdue, which is a No. 4 seed in the South Region. The Big Ten school is also serving as host to a pair of First Four games on Thursday at Mackey Arena, but the Boilermakers will face North Texas on Friday at Lucas Oil Stadium.

Oddsmakers offering Final Four options are not overly sold on home-state advantage providing much help. Purdue is a +1150 choice to reach the Final Four on the Kambi platform, the same as eighth-seeded North Carolina in the South Region and behind No. 9 and Big Ten rival Wisconsin (+1000).

William Hill and FanDuel both list the Boilermakers as +850 options, and BetMGM is offering +1000 for Purdue  to make its first Final Four appearance since losing to UCLA in the 1980 national semifinal and beating Iowa for third.

In terms of winning its first NCAA tournament title in school history, Purdue’s odds range from +4000 at BetMGM to +6600 at PointsBet.