Despite enjoying its highest ranking in 53 years, No. 9 Indiana is still a nearly three-touchdown underdog heading into its Big Ten showdown at third-ranked Ohio State. 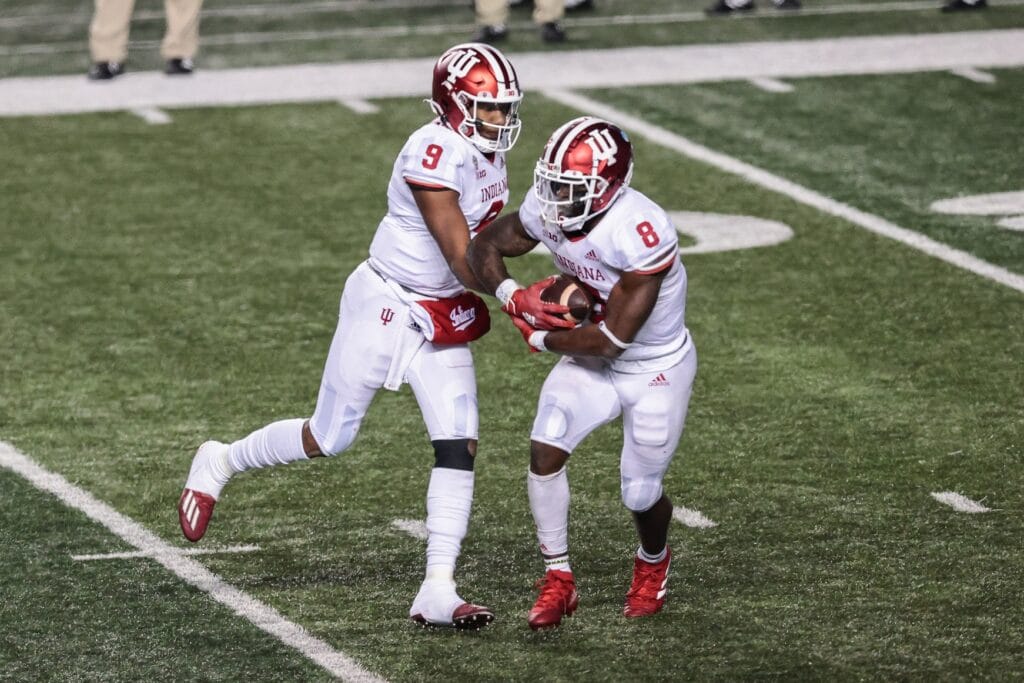 Though only six spots separate No. 9 Indiana and third-ranked Ohio State in the latest Associated Press Top 25 college football pool, oddsmakers see a larger chasm between the teams heading into Saturday’s showdown that gives the winner the inside track to the East Division title in the Big Ten.

The Hoosiers (4-0) have been a feel-good story of sorts, enjoying their highest national ranking since holding the No. 4 spot in 1967. They started their season with an upset of a Penn State team ranked in the Top 10 and then ended a 24-game losing streak to Michigan. While both of those squads appear to be well off their customary quality, Indiana has beaten whoever is on the schedule and is coming off a 24-0 drubbing of Michigan State last weekend.

Michael Penix threw for 320 yards and two touchdowns while Stevie Scott added 90 rushing yards and a score for the Hoosiers, who rank third in the nation with a plus-8 turnover margin and have 10 interceptions among their 12 takeaways. That ball-hawking defense will have to be at its best against an Ohio State offense that has racked up 139 points in three blowout victories.

The Buckeyes (3-0) were idle last week, their scheduled game at Maryland canceled due to a COVID-19 outbreak among Terrapins payers. Quarterback and Heisman Trophy candidate Justin Fields has been outstanding directing the offense, completing 86.7% of his passes for 908 yards, and has as many touchdown passes as incompletions (11).

Ohio State has won 22 straight at home overall and 24 straight over Indiana since the teams played to a 27-all tie in 1990. The Buckeyes are also riding a 14-game home winning streak over the Hoosiers since a 31-10 loss at The Horseshoe in 1987.

A spread of nearly three touchdowns

Sportsbooks across Indiana see the Buckeyes as decisive favorites, with Ohio State a favorite by nearly three touchdowns at most of them. BetRivers has the spread at exactly three touchdowns with a split of -114/-107, while PointsBet, FanDuel, DraftKings, and BetMGM look to be enticing Buckeyes backers at -20.5. DraftKings is the only book deviating from -110 on that play, offering a -114/-107 split.

There are multiple offers on the over/under, with FanDuel and BetMGM coming in low at 66.5 points and PointsBet on the high side at 67.5. DraftKings and BetRivers split the difference at 67, and all five books are offering the standard -110 for that play. PointsBet, DraftKings, and BetRivers also have team totals available — the Australian-based book offers the Hoosiers at 23 points with -121 for the over and -110 for the under, while BetRivers and DraftKings are offering 22.5 points at -121/-108.

The only area where the books are in sync is a first half over/under of 34.5 points. FanDuel is offering -110 and BetMGM has -114, while PointsBet (-110/-121) and both BetRivers and DraftKings (-118/-109) have split offerings. BetMGM has Indiana as a +525 offering for its first-half moneyline, with BetRivers offering +480 on a three-way moneyline that includes a tie.

BetMGM is the only book offering a first-quarter spread, installing Indiana as 7-point underdogs at -113. It also has an over/under of 14 points in the first 15 minutes at -125/-103, while BetRivers and DraftKings appear to be daring bettors to take the over. Both are offering 14.5 points with a +102/-132 split.