Hoosiers In Trap Game Versus Michigan State; Irish Square Off With BC

Now in the AP Top 10, Indiana tries to avoid looking past Michigan State on the road, and second-ranked Notre Dame -- coming off its win over then-No. 1 Clemson -- faces Boston College on the road. 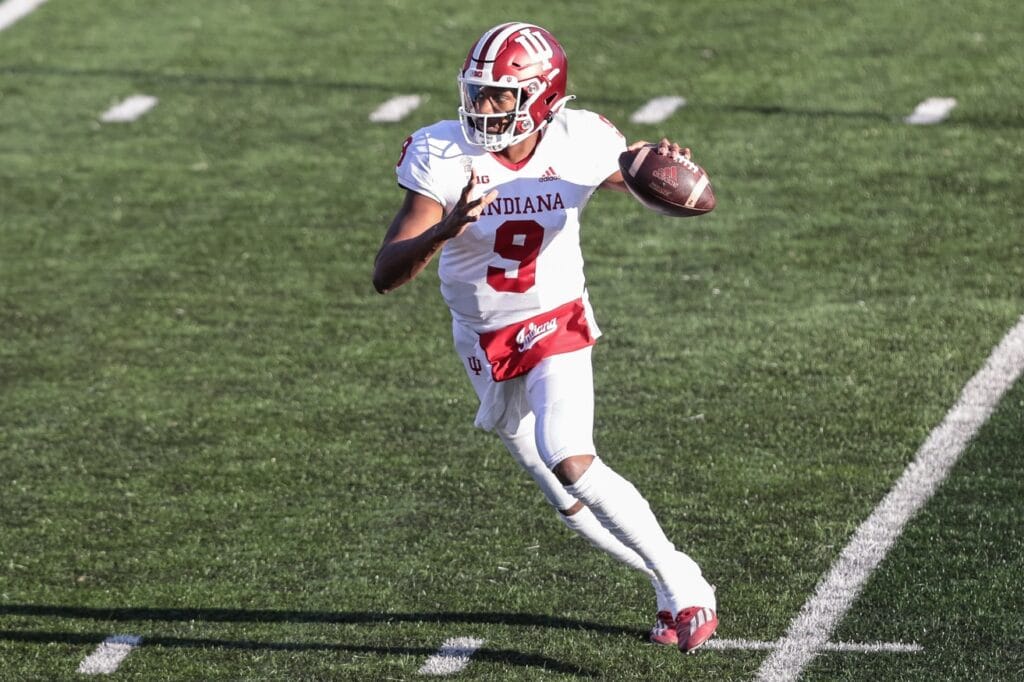 In a year unlike any other, it only seems fitting that Indiana — now ranked 10th in The Associated Press Top 25 — is the Big Ten team looking to avoid losing in a “trap game” this weekend instead of the one taking advantage of a favored opponent.

The Hoosiers (3-0) are tied with No. 3 Ohio State atop the East Division of the Big Ten and have the chance to claim sole possession of first place Saturday with a victory at Michigan State. Indiana travels to Columbus next weekend to face the Buckeyes, whose game scheduled Saturday at Maryland has been canceled due to a COVID-19 outbreak among Terrapins players.

Overall, there are six Big Ten games available for wagering, though one — Illinois versus Rutgers — has the wry twist of bettors located in both Illinois and New Jersey being unable to wager on it. Their state laws ban betting on in-state schools.

Can the Hoosiers stay unbeaten?

Indiana showed last Saturday its season-opening upset of then-No. 8 Penn State was no fluke by putting together a complete performance in defeating then-No. 23 Michigan 38-21. Michael Penix Jr. threw for 342 yards and three touchdowns while Stevie Scott III added 97 rushing yards and a pair of scores to help the Hoosiers end a 24-game losing streak to the Wolverines.

Indiana’s three-game losing streak to Michigan State (1-2) is nowhere near that length, but the Spartans have held the upper hand in the rivalry with wins in 14 of the last 16 matchups. Indiana has lost eight straight in East Lansing since a 37-28 victory in 2001, including a 40-31 defeat last year.

The Spartans, whose lone win this year came against archrival Michigan, are coming off a 49-7 thrashing administered by Iowa. Rocky Lombardi was intercepted three times in the first half, the last a pick-6 that put Michigan State in a 35-0 hole right before halftime.

Oddsmakers across Indiana sportsbooks have installed the Hoosiers as solid favorites. BetMGM and William Hill have them listed a touchdown better than the Spartans, while FanDuel, PointsBet, DraftKings, and BetRivers all have a 7.5-point spread. PointsBet is offering -105 on either side of its listing, and both BetMGM and William Hill have -110 for their lines. FanDuel has a -108/-112 split for its offering, and DraftKings and BetRivers are just off that at -109/-112.

DraftKings, BetRivers, William Hill, and PointsBet are all offering 52 for the over/under, while FanDuel and BetMGM have ticked one-half point higher. PointsBet and William Hill have -110 on both sides, while BetMGM has the highest variance with a -106/-115 split compared to FanDuel (-108/-112) and BetRivers and DraftKings (-108/-113).

PointsBet has the best moneyline offering for Indiana at -285, while FanDuel has the best line for a Spartans upset at +260.

One area of agreement among all six books is the first-half over/under, established at 26.5 points. FanDuel and William Hill have -110 in either direction as the best offers, and BetMGM is the only book offering two different values with -110/-115.

FanDuel also has Indiana -185 on a three-way moneyline for the first two quarters while the other five sportsbooks range from -190 (William Hill) to -235 (DraftKings, BetRivers) for a no-tie option.

No. 2 Irish out to avoid letdown at Boston College

While Indiana is trying not to look ahead, No. 2 Notre Dame (7-0, 6-0 ACC) visits Boston College looking to avoid a letdown after its double-overtime victory over top-ranked Clemson last weekend. The Irish outlasted the Tigers 47-40 at home to move up two spots in the poll behind Alabama and gain the inside track to appear in the ACC title game.

Boston College (5-3, 4-3), which gave Clemson all it could handle two weeks ago before losing 34-28 to the Tigers on the road, held off Syracuse 16-13 last Saturday. Its defense held the Orange to 240 yards and forced two turnovers.

PointsBet is offering the best moneyline for Notre Dame at -481, and FanDuel and William Hill are the only other books off -500 for an Irish win at -590 and -550, respectively. William Hill has the best offering for a BC upset at +425.

BetMGM and William Hill have a first-half over/under of 24.5 points, with the former split -115/-110 and the latter offering the standard -110. Everyone else ticks a full point higher to 25.5, with FanDuel’s -110 in each direction the best offer.