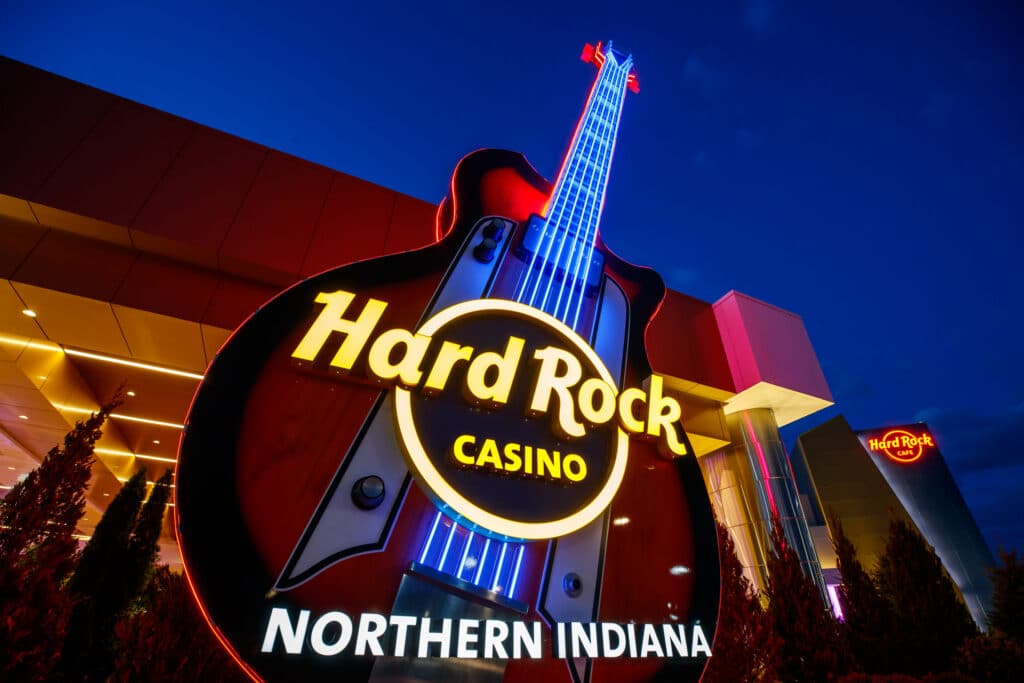 Randy and Tito Jackson of the Jackson 5 along with celebrated Gary musicians Deniece Williams and Kym Mazelle and rock stars Mark McGrath of Sugar Ray and Pete Wentz of Fallout Boy were also on hand to christen the $300 million casino along with Hard Rock International Chairman James Allen and Marcellus Osceola, the chairman of Hard Rock’s owner, the Seminole Tribe of Florida.

“Today we celebrate a job well done. Today we celebrate with a community that believed and worked to make a dream come true,” said Spectacle Vice Chairman Greg Gibson, whose company partnered with Hard Rock to bring land-based gaming to Gary. “This beautiful facility is a product of much hard work and dedication by those who believed that the city of Gary was destined for greater things.

The location is near the site of Majestic Star Casino in Buffington Harbor, and equipment was moved from that venue to Hard Rock. It will be one of 12 casinos in the state, but also one of three near the Illinois state line, along with Ameristar Casino in East Chicago and Horseshoe Casino in Hammond.

Amenities and plenty of gaming space

Hard Rock Northern Indiana has more than 200,000 square feet of space, with more than three-fourths of it dedicated to gaming. It has more than 1,600 slot machines and 80 table games as part of the 2,100 gaming positions available. There are also five restaurants and a live entertainment venue that seats just shy of 2,000 people.

The sportsbook, which has yet to open, has five manual ticket-taker windows with three large screens visible from the bar area as well as 12 smaller screens just above the teller windows. Hard Rock is expected to offer mobile sports betting and could be the second operator to launch in May following Barstool Sports announcing it will begin accepting online wagers Tuesday.

Similar to other Hard Rock locations, the casino floor space is full of memorabilia from famous musical acts both in terms of instruments and wardrobe. The Northern Indiana location pays homage to both Michael Jackson and the Jackson 5, showcasing the red leather jacket from Michael Jackson’s “Beat It” video and his famous Swarovski crystal glove.

The costumes worn by the Jackson 5 for a 1977 CBS television appearance are also on display, and each member of the family is represented via artifacts and stories in a “Rock Vault.” Other instrument and wardrobe memorabilia from Eddie Van Halen, ElvisPresley, Justin Timberlake, Madonna, Mariah Carey, Pharrel, Shakira, and Fergie are on display throughout the casino.

A long road to put Gary back on the national map

ICYMI🚨 Come along with Executive Host, Canh, as he provides a sneak peak of our High Limit area! pic.twitter.com/b9O3RPMAVY

Brining casino gaming to Gary was a multi-decade process that began with former state Sen. Earline Rogers. Her successor, Eddie Melton, saw it through after taking office in 2016 and getting to the groundbreaking in January 2020. Both were in attendance, with Melton and Gary Mayor Jerome Prince thanking Rogers for her efforts.

Rogers recounted a chance encounter with a lobbyist from Gary in 1989 on the Senate floor as lawmakers considered various forms of gaming that put everything in motion.

“He said, ‘Earline, what about casinos?'” said Rogers, who was born and raised in Gary, “and asked if I could set him up with the mayor, who was Tom Barnes at the time. I set up the meeting, we all met, and decided casinos would be good for Gary.

“It’s a dream come true. … When you think about a $300 million investment in Gary, Indiana, how wonderful is that? I think it will be uplifting for the people who live here and never change their mind about Gary being able to survive after the steel industry went down.”

Melton picked up on the theme while also noting the importance of Gary aligning itself with a national brand in Hard Rock.

“For a city like Gary to have a significant investment of $300 million in construction and jobs — new jobs — it’s a phenomenal thing in a city that has been thirsting for opportunity,” he said. “My predecessor took over 20 years relocating the casino from Buffington Harbor, and today we’re seeing the fruits of that labor and I’m honored to have carried the torch from her.”

The project was nearly derailed during the winter when ex-Spectacle CEO Rod Ratcliff was suspended by the Indiana Gaming Commission in late December for his failure to relinquish control of the company when he stepped down in June. The back-and-forth, which included Ratcliff filing a lawsuit versus the IGC, ended in March when he sold his shares back to Hard Rock and permanently relinquished his gaming license.

That allowed equipment to resume moving from Majestic Star Casino to Hard Rock after the IGC put a pause on that activity for nearly two months. IGC Executive Director Sara Gonso Tait, who also recently oversaw negotiations on behalf of the state to expand the compact with Four Winds Casino to include Class III gaming, was pleased with the final outcome after working in tandem with Hard Rock on the moving process.

“This is what the legislature envisioned when it passed the Riverboat Gambling Act,” she said. “Additional revenues for the state, and for the local community, the creation of jobs, economic development and tourism. We’re happy that Hard Rock showcases so much Indiana-grown talent, including the Jackson family, which is integral into the exciting look and feel of this first-class facility.”

The state of Indiana has received more than $436.3 million in taxes from gaming venues across the state in the first four months of 2021. Hard Rock’s competitors in the region, Ameristar and Horseshoe, have accounted for $165.6 million of that amount.