Hard Rock announced a May 14 opening date for its Gary casino and has moved close to an agreement for a "rocksino" in Terre Haute. 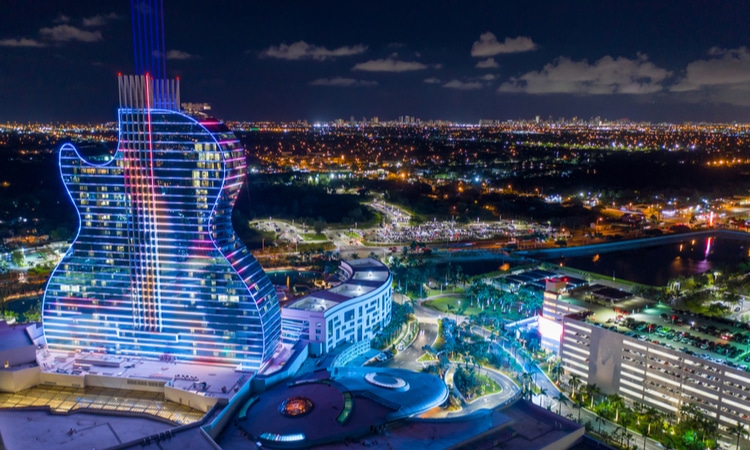 Hard Rock International announced a May 14 public grand opening for its northern Indiana casino in Gary during the state’s Gaming Commission meeting Tuesday.

Chief Operating Officer John Lucas provided the launch date as he updated the regulatory body on the progress being made at the Gary property and toward a “rocksino” in Terre Haute. Hard Rock Northern Indiana is currently installing gaming equipment shifted from the nearby Majestic Star casino, a process that resumed this month after former Spectacle Entertainment CEO Rod Ratcliff sold his shares in the Gary property back to Hard Rock International and relinquished his gaming license.

“We are extremely excited about the future in Indiana and working with the state, and the commission, and the local communities that we’ll be in,” Lucas said during a presentation. “We anticipate a great partnership with Spectacle Entertainment, certainly [Spectacle Vice Chairman] Greg Gibson and I have worked very closely over the last year to move this thing forward.

“As Greg said, there’s certainly been a few speed bumps along the way, but we believe they’re behind us now.”

Lucas said the casino will open for friends and family with a practice event on May 11 and go dark the following day to address any potential logistical issues. Hard Rock will then have a VIP invitation-only gathering May 13, and its customary guitar smash opening will take place at 10 a.m. local time May 14. The casino will then open to the public at 5 p.m. that day.

Hard Rock Northern Indiana will enter an already-competitive casino gaming scene just beyond the Illinois border within an hour’s drive of Chicago, joining Ameristar Casino in East Chicago and Horseshoe Hammond for entertainment and gaming options.

IGC fines Spectacle as part of closure to Ratcliff saga

Prior to remarks by Lucas and Gibson, the Indiana Gaming Commission also gained some closure to the whole Ratcliff saga, reaching a $530,000 settlement against Spectacle Entertainment — $10,000 for each of the 53 days the licensee failed to comply with the commission’s suspension of Ratcliff’s license ordered during a Dec. 28 meeting.

“Staff was pleased that the remaining parties were able to alleviate our most pressing concerns, but I’m disappointed it was after many months of very significant pressure, and frankly, an embarrassing display at our December meeting,” IGC Executive Director Sara Tait said in remarks before the settlement was voted on and approved. “Much is still unknown, both Spectacle and Lucy Luck know the concerns of IGC staff and the continued risks that could impact suitability.

“I am hopeful that we are entering a stage following many dark months where we’re moving forward and I am hopeful the parties … will provide the commission with assurances regarding that path.”

Tait noted the investigation into Ratcliff and Spectacle Entertainment is ongoing and the settlement was reached in part due to the unprecedented nature of a licensee’s failure to comply with a commission order.

“If this was left unaddressed, we would be sending a dangerous message to not only the public, but other licensees that we regulate,” Tait said.

Hard Rock’s involvement in Terre Haute, which included a name change to Lucy Luck Gaming from Spectacle Jack in early February as perhaps a means of separating the project from the Ratcliff controversy, has generated optimism among local politicians as it moves closer to a potential groundbreaking date.

“This casino adds a whole new component as we look at changing our community, growing our community, continuing to diversify our economy. This is a whole new piece of that,” Terre Haute Mayor Duke Bennett said while touting the benefits of the $175 million construction project. “I’m excited to be able to know it’s really going to come here soon.”

Lucas said he expects the Terre Haute project to progress more smoothly because Hard Rock is not moving equipment from a pre-existing facility to a new one, unlike with the Gary location, and will have a team “100 percent dedicated to that facility. We see the Terre Haute project as a little easier hurdle to jump over than Gary and Majestic Star.”

Bennett acknowledged a management agreement between the two parties has yet to be executed, but Gibson hopes to have a groundbreaking by late April. IGC Commissioner Susan Williams expressed optimism in the project and hope that the agreement is formalized quickly, adding she would like to see a signed agreement in place by the next IGC meeting scheduled for May 25.