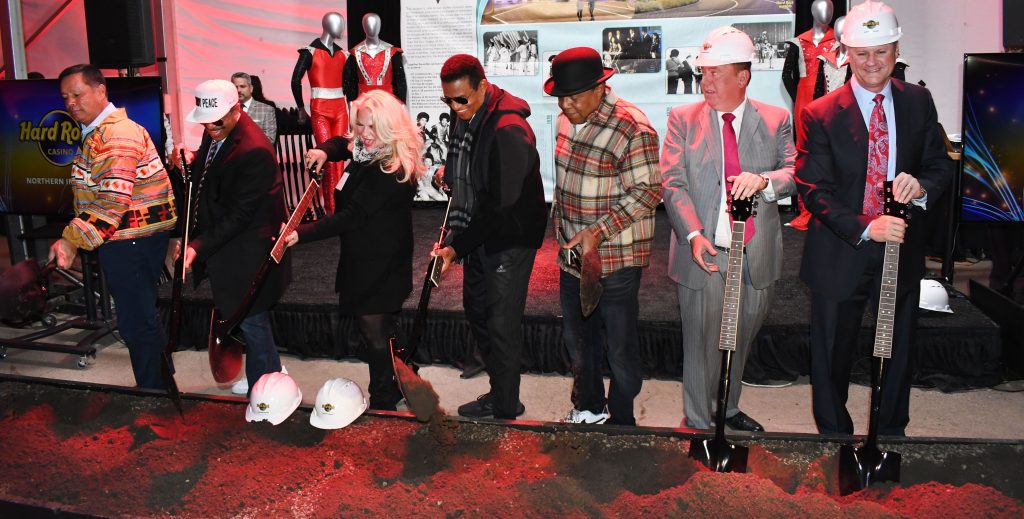 Spectacle Entertainment and Hard Rock International broke ground last Thursday on a $300 mm entertainment complex in Gary that will include the first land-based casino in the state of Indiana not near a docked casino boat.

Members of Spectacle Entertainment, Hard Rock International, both Gary city and Indiana state officials, and even three members of the Jackson 5 — Marlon, Tito, and Jackie — were on hand for the ceremony. While Spectacle vice president and general counsel John Keeler previously stated the goal is to open Hard Rock Northern Indiana on New Year’s Eve, it is considered more likely to open in the first quarter of 2021 unless favorable weather gives the construction crews the chance to make up lost time.

“Breaking ground for Hard Rock Casino Northern Indiana is the start of an incredible partnership between Spectacle Entertainment, Hard Rock International, and the city of Gary, Indiana,” Spectacle Entertainment Chairman and CEO Rod Ratcliff said. “It is an honor to be here today and see this dream become a reality. A lot of work has gone into this project, a lot of planning. I’m grateful to all those who played a part in it. There is no doubt this is a game changer for Gary, Indiana, and the entire Northern Indiana region.”

Hard Rock Northern Indiana will have its work cut out to gain a foothold in northern Indiana along the border with Illinois. The Hoosier State already has three casinos — Ameristar in East Chicago, Horseshoe Hammond, and Blue Chip in Michigan City in the area, and Illinois passed a massive gaming expansion bill last June which legalized sports betting and included licenses for a casino in downtown Chicago and suburban Cook County.

The new casino will have more than 2,100 gaming positions and a sportsbook, and Hard Rock Northern Indiana is forecasting more than $20 mm in tax revenue and payments to the city of Gary and the surrounding communities. The 30-acre tract will also include six food venues, a retail shop, and a 2,000-seat showroom venue. There are also plans for a second phase that includes a hotel of at least 200 rooms after the casino opens.

“It’s an honor to partner with Spectacle Entertainment on this project, bringing the Hard Rock brand of world-class entertainment to Northern Indiana,” Hard Rock COO Jon Lucas said. “This property will be the premier casino destination in the region.”

While Hard Rock Northern Indiana is under construction, it will continue to operate the Majestic Star casinos in Buffington Harbor. Majestic Star, which does not offer sports betting, reported a table drop of $7.9 mm and coin in of $98.6 mm in the month of December, according to the Indiana Gaming Commission’s monthly revenue report.