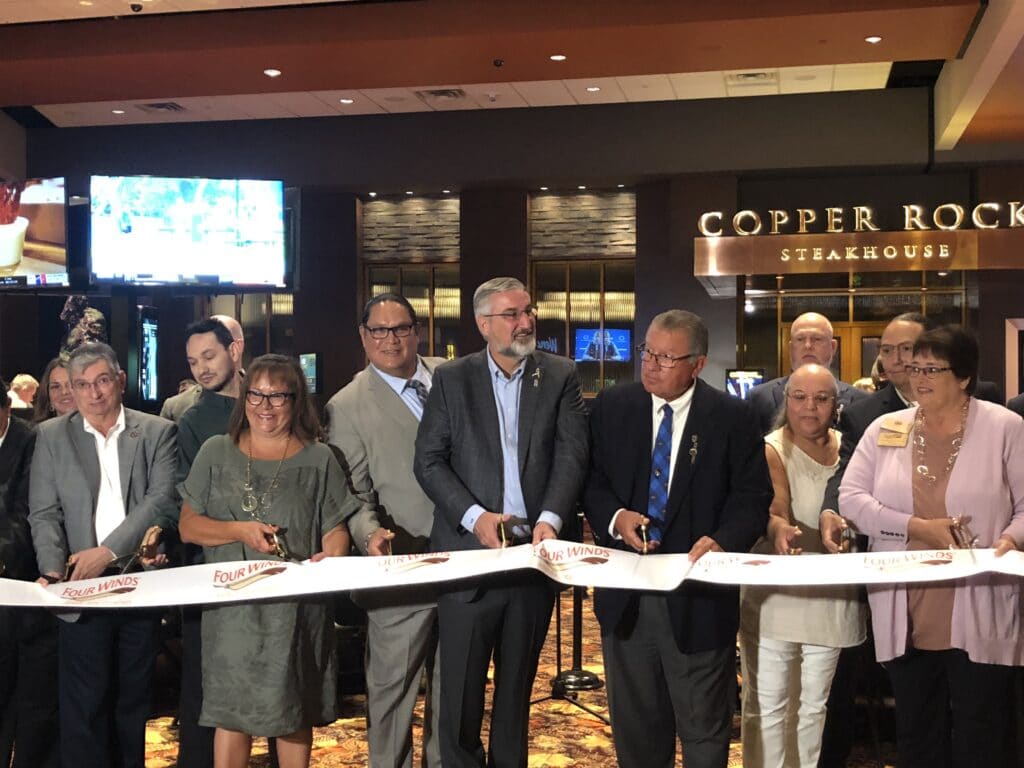 The ribbon-cutting was the last step of a two-year process that began in August 2019 with the tribe and the state negotiating a compact to expand gaming offerings at the South Bend location, making it similar to the Pokagon Band’s three casinos in Michigan. The compact required state legislative approval before continuing its path to the Bureau of Indian Affairs at the U.S. Department of the Interior. The federal OK came after both Wesaw and Holcomb signed the compact in early May.

Four Winds now has the capability to offer all gaming similar to commercial casinos, including table games, Class III slot titles, and sports wagering. Its 16 table games will be operational from 10 a.m. to 2 a.m. seven days per week and also feature Aruze Roll to Win Craps, an electronic table that has proven popular at the tribe’s New Buffalo location in Michigan.

The casino has begun the process of upgrading its more than 1,400 slot machines to Class III titles. As part of being elevated to Class III gaming, the Pokagon Band will pay 8% of its slot machine winnings to the state and continue to pay the city of South Bend 2% of revenues.

It was also announced Thursday the casino would be part of the state’s voluntary self-exclusion program for problem gamblers.

Wesaw heads out on high note 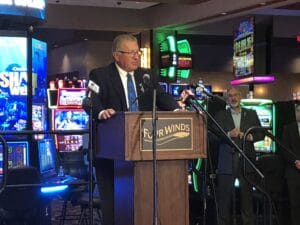 As Four Winds enters a new era of gaming, Wesaw also announced he would be stepping down as Pokagon Tribal Council chairman effective next week after opting not to seek re-election. During his remarks, he noted how the compact provides a “hand up” to the economic development and social services of the tribe.

“Not only is Class III gaming in Indiana a historic and important milestone for the Pokagon Band and our Four Wind Casinos, but the expansion of Four Winds South Bend will create numerous additional economic benefits with the state of Indiana and the city of South Bend,” Wesaw said. “It’s a great day to be a Pokagon and we are very excited for what the future holds.”

Wesaw took the most pride in the expansion of educational opportunities the compact provides for the tribe. That includes a $1 million program covering all expenses for Pokagon citizens to attend two-year and four-year colleges or trade and vocational schools.

“There were many who did not believe we could negotiate a gaming compact with Indiana,” Wesaw recounted. “I was not one of the non-believers. I always felt it would happen, and we began to lay the foundation many years ago. There were setbacks for a variety of reasons, but I knew the right time would come, along with the right people, who would be in office at the table.

“The compact is fair and reasonable. Today is the culmination of the collective work of all the partners.”

Holcomb was quick to point out the collaborative efforts of both the tribe and the state in his remarks, with Indiana Gaming Commission Executive Director Sara Gonso Tait praised from both sides for her service as lead negotiator for the state.

“Each and every one of you on the council, on the commission, everyone that had a hand, whether it was big or small, those roles all add up and everyone played them perfectly,” the governor said, “and that’s how we did arrive at this day.”

The friendship Holcomb and Wesaw struck throughout the process was again evident in the governor’s comments, joking about the chairman’s impending retirement but also being pensive during his remarks. He told those in attendance that “days like today are proof that our mission and our vision is shared, it’s aligned, and really special things come from that coordination.” 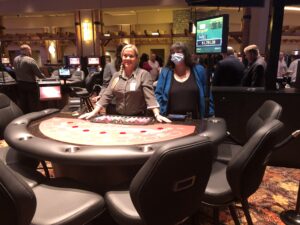 While Four Winds South Bend had begun plans to expand in the form of a 23-story, 317-room hotel prior to the Class III gaming approval, Chief Operating Officer Frank Freedman offered a progress report on that front. He noted the 23-story hotel structure is approximately halfway done, and it is targeted to open in the first quarter of 2023.

The current gaming floor of 140,000 square feet will also be expanded by 40,000 feet to allow a walking connection to the hotel. One of the key purposes of the hotel and adjoining convention center is to draw more businesses to the location, something Freedman noted is a challenge for the tribe’s New Buffalo location because of the need to keep sufficient hotel rooms available for players.

All photos by Chris Altruda