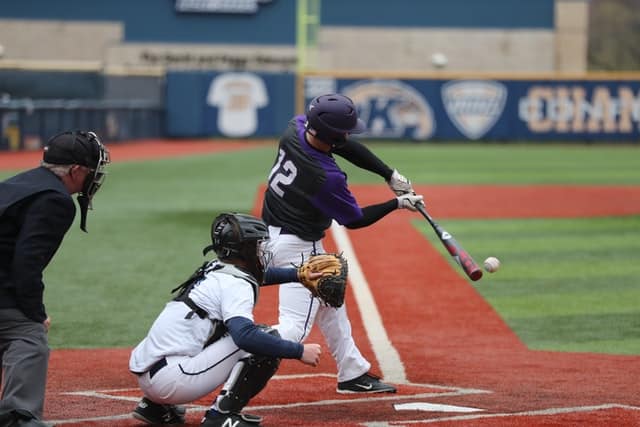 Each pitcher was selected by a professional team on Day 2 of the 2022 MLB Draft, led by 6´1 right-handed reliever and third baseman Jack Brannigan.

Although Brannigan saw limited action on the mound for the Fighting Irish in 2022, his main accolades were achieved in the batter’s box, where he played a key role in Notre Dame’s upset Super Regional series victory over the #1 ranked Tennessee Volunteers.

According to the official UND website, Brannigan ended the 2022 NCAA baseball campaign with an overall batting average of .291 while leading the team in doubles and being second in total hits and home runs.

Brannigan was selected by the Pittsburgh Pirates on Monday in the third round with the #83 overall pick.

Right-handed pitcher Liam Simon was taken in the fifth round (#166 overall) by the San Francisco Giants. The junior out of New Jersey was instrumental to Notre Dame’s success in the Statesboro Regional and finished the 2022 NCAA baseball season with an ERA just under 5.

Alex Rao is another right-hander who was selected Monday. Rao picked up a win in relief against Tennessee in this year’s Super Regional while amassing a 10-10 overall record in his four years with the Notre Dame Fighting Irish baseball team.

Rao was selected #242 overall in the eighth round by the Philadelphia Phillies.

Left-handed pitcher John Michael Bertrand was the final Notre Dame player to be selected on the second day of this year’s Major League Baseball Draft.

The San Francisco Giants picked up Bertrand in the tenth round with the #316 overall selection. Originally from Georgia, Bertrand is a graduate student at the University of Notre Dame who performed as the Fighting Irish’s mound ace during his senior year.

Notre Dame finished their 2022 NCAA baseball season with a record of 41 wins and 17 – and shocked the nation with their best-of-three Super Regional upset over the #1 Volunteers in Knoxville.

The Fighting Irish won their first game in the 2022 College World Series over the Texas Longhorns before falling to the Oklahoma Sooners and Texas A&M Aggies in consecutive games.

Indianapolis Colts fans who are also video game enthusiasts will be pleased to hear that two defenders for the Colts team have been granted an “Overall Rating” of 90 or above for the upcoming Madden NFL ‘23 release by EA Sports.

Indianapolis cornerback Stephon Gilmore will have an overall rating of “91” while defensive tackle DeForest Buckner has been rated at “90” overall.

The Madden NFL ‘23 football game releases next month on all major platforms and is set to include weekly roster updates for gamers who prefer to play their season in accordance with activity that is happening in real time, week-by-week.

Indiana Online Sportsbooks Are Ready To Take Your Action

Hoosier State online sportsbooks have a wide variety of banking options for customers who are located inside the state of Indiana and are at least 21 years old.

Sign-up now for an Indiana online sportsbook account through HoosierStateBets to receive the best customer service in the legal online sports betting market – and be sure to check out our guide on NFL Betting ahead of the 2022-2023 regular season.