The Bears will give rookie quarterback Justin Fields the majority of offensive snaps Saturday when they open their exhibition schedule Saturday versus the Miami Dolphins. 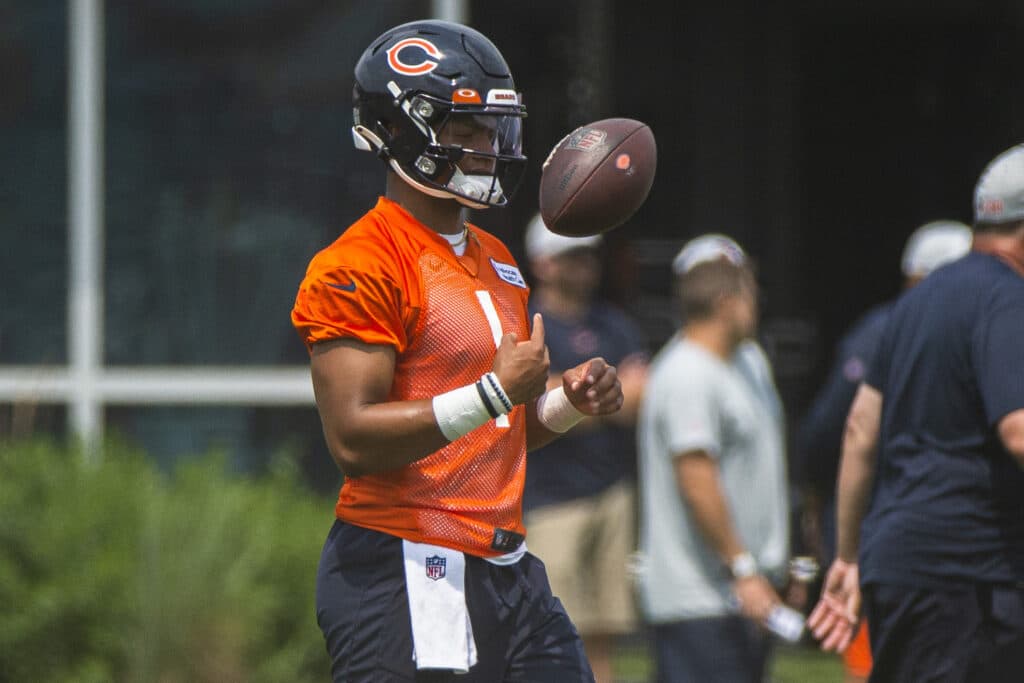 The preseason hype surrounding rookie quarterback Justin Fields has reached a crescendo in Chicago, where coach Matt Nagy is expected to give the future franchise signal-caller extensive playing time Saturday when the Bears host the Miami Dolphins in their exhibition opener.

The Bears stunningly moved up via trade with the New York Giants the first night of the NFL Draft to select Fields 11th overall. While there are still nightmares from the last time the team pulled that maneuver to select what was supposed to be a franchise quarterback — hi, Mitch Trubisky! — Fields is still second on the depth chart behind veteran Andy Dalton a month before Chicago’s regular season opener versus the Los Angeles Rams.

Nagy has said he will give Fields the bulk of the snaps in this contest, with Dalton expected to play the opening series and Nick Foles likely to finish the game. That will afford Fields, who guided Ohio State to the College Football Playoff in both his two seasons while throwing for 5,373 yards and 63 TDs, every chance to shine and make the mistakes that come with life as a rookie NFL quarterback. The teams also held two joint practices this week, which will make the game an instant measuring stick to see how much Fields has progressed.

The Dolphins know all about breaking a rookie quarterback into the NFL, with coach Brian Flores having replaced veteran Ryan Fitzpatrick midseason last year with Tua Tagovailoa, the No. 5 overall pick in 2020. Tagovailoa is now entrenched as the starter after throwing for 1,814 yards and 11 touchdowns in 10 games last season, and Miami is expected to contend for a playoff berth and possibly challenge Buffalo in the AFC East.

Flores did not offer an estimate of how many snaps Tagovailoa would get, but he expects his starting quarterback to play.

Justin Fields was unstoppable in the red zone against the Dolphins today. pic.twitter.com/qSiAACYDbw

The six sportsbooks offering online wagering in Illinois all have the Bears listed as 3.5-point favorites for this contest, so line-shopping takes on some importance for those interested in placing a bet. As of 9 a.m. CDT Friday, Caesars offered the best Bears play on the spread at -105, with PointsBet and FanDuel close behind at -110. BetRivers and Barstool Sportsbook both were offering -112, with DraftKings rounding out the six at -115.

For those more, um, bearish and taking the Dolphins to either cover or win outright, DraftKings led the pack this time at -105 with the 3.5 points. Barstool Sportsbook and BetRivers were at -109, edging out the standard -110 from FanDuel and PointsBet, and Caesars was most bullish on the Fish at -115.

For moneyline plays, the best Bears offering was -175 at Caesars, BetRivers, and Barstool, followed by DraftKings and FanDuel (-180) and PointsBet (-186). On the flip side, BetRivers and Barstool offered Miami at +140, but everyone else had a +155 listing.

For those who like to live dangerously with young quarterbacks and play the points total over/under, PointsBet and DraftKings were on the high side at 36 points, offering the standard -110 in both directions. The line ticked one-half point down at the other four books, with Caesars and FanDuel both offering -110 on either side and Barstool and BetRivers listing a -114/-107 over/under split.