Can the Jets be survivor pool slayers once more, or will the Colts bounce back from a tough OT loss? 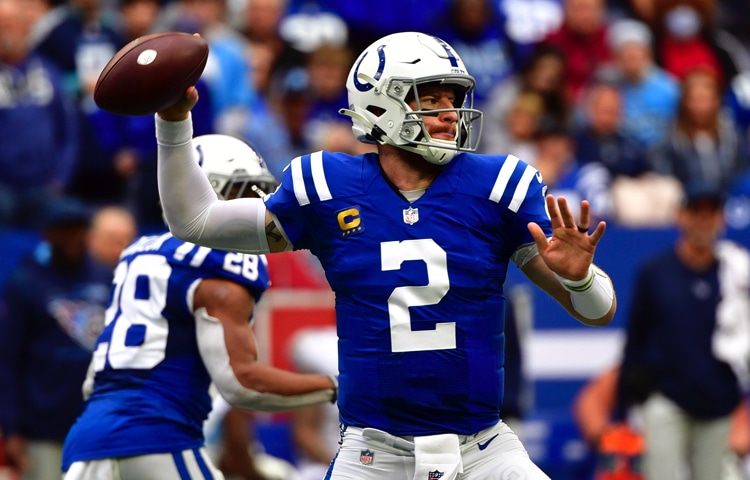 Normally, a 2-6 team starting its second-string quarterback with a short turnaround playing Thursday Night Football on the road would not cause much trepidation among the sports betting public.

Then there are the New York Jets.

After decimating survivor pools and giving NFL bettors nightmares nationwide with a 34-31 upset of the Cincinnati Bengals last Sunday, the Jets again find themselves double-digit underdogs against the Indianapolis Colts to start Week 9 of the NFL season. New York became the first double-digit ‘dog to win outright this season, and after Mike White caught lightning in a bottle with 405 yards and three touchdown passes in his first career start, it is understandable that bettors may be wary of this game.

Additionally, Indianapolis’ performance last week versus Tennessee also likely made Colts backers throw their hands (and other things) up in exasperation. The Colts (3-5) scored two first-quarter touchdowns 57 seconds apart to grab a 14-0 lead, but squandered it before halftime. With less than two minutes to go in regulation, Carson Wentz threw a mind-numbing, pick-6 in which he threw the ball left-handed from the end zone as four defenders were bearing down on him.

Wentz still rallied the Colts on a game-tying touchdown drive with 22 seconds left in the fourth quarter, only to throw a second back-breaking INT in overtime that set up the Titans’ game-winning field goal in a 34-31 defeat. The loss dropped Indianapolis three games behind Tennessee in the AFC South, but it is essentially a four-game deficit, since the Titans also swept the season series.

Indianapolis is 1-3 at home, with the lone victory over hapless Houston. While the Jets are not world-beaters by any stretch, their newfound confidence, coupled with the Colts’ home struggles, could provide a reason to fade the hometown team at sportsbooks across Indiana. If that is the case, some line-shopping is essential, especially with a line that could feature late movement before kickoff.

The hook adds to the challenge on the main play

Most sportsbooks have listed the Colts as 10.5-point favorites for this game as of 9 a.m. CDT on Thursday, with the high-side hook on a touchdown-plus-field goal total the primary challenge among many for bettors to navigate. WynnBET currently has the best play at -105, while the Kambi platform (powering BetRivers and Unibet)are both offering -107, followed by FanDuel at -108.

DraftKings has eschewed the hook, offering the Colts at -10 with some cost at -115.

The over/under for the Colts’ team total also brings the high-side hook in play, as every book has a listing of 28.5 points, though FanDuel is offering that as part of its single-game parlay options with a -108/-114 split. The sportsbook is offering a flat 28 total on its standard play at -112/-108. For those confident that the Colts can reach 30 points, Caesars is the best play on the over at even money (+100), while PointsBet is the best play to ride the hook for the under at -110.

The double-digit spread makes for a limited return on individual moneyline plays for Colts backers. Kambi’s -500 is the best offering of the bunch, with DraftKings and Wynn a distant second at -525. Those wanting to fade Indianapolis for this game can get the Jets at +425 at both PointsBet and BetMGM.

After a game in which he ran the full gamut of betting options, Wentz continues to be the focus of player prop offerings. At the top, sportsbooks are confident he will throw two or more touchdowns for a sixth straight game, with FanDuel (-130) and PointsBet (-131) the best plays for over 1.5 TD passes.

More interesting, though, is operators offering the over/under of 0.5 INTs still are offering plus money for him on the over after he was picked off twice by the Titans. Caesars is the top play at +130, while those hedging he will be more careful and efficient versus the Jets secondary can get the under at -154.

For anytime touchdown scorers, there is universal consensus Taylor will find the end zone in this game. Caesars is the best play at -190, which means more advanced bettors may want to consider that play as part of a combination or single game parlay option. There is a wide range on Pittman’s play here, with DraftKings the best option at +120, in stark contrast to WynnBET offering -120.

DraftKings also has the top offering for Pascal at +190, while Caesars’ play of +370 for a touchdown by Nyheim Hines stands out, considering BetRivers and Unibet are second at +275. Kambi has the top listing for tight end Mo Allie-Cox at +285, with FanDuel and PointsBet close behind at +280. For those who think Wentz will find paydirt with the ball in his hands, Caesars is the best option at +450, with DraftKings second at +400.

All about Mike White: From Cowboys cut to #Jets backup quarterback to NFL folk hero

In contrast to the full-game side bet, most sportsbooks are willing to run up to the low-side hook on the first-half lines. The most common play is Colts -6.5, with BetRivers and Unibet offering the number at -106. BetMGM, DraftKings, and TheScore Bet have opted for -6, with the first two at -110 and TheScore at -115.

PointsBet has opted to give bettors a risk/reward challenge, offering the Colts -5.5 at -131 as a safer play while also providing a -7.5 listing at +120.

BetMGM has the best play on the standard moneyline at -275, which is matched on Kambi’s three-way moneyline. FanDuel, though has a better offer on the latter at -250.

The hook is also in play for the Colts’ team total in the first half. Those who think Wentz and company can clear two touchdowns can grab an over of 14.5 points at WynnBET for +105 or FanDuel at +102, though the latter is for single-game parlay play. PointsBet also has the number at even money.