Indianapolis running back Jonathan Taylor might not win MVP, but he's still an elite force 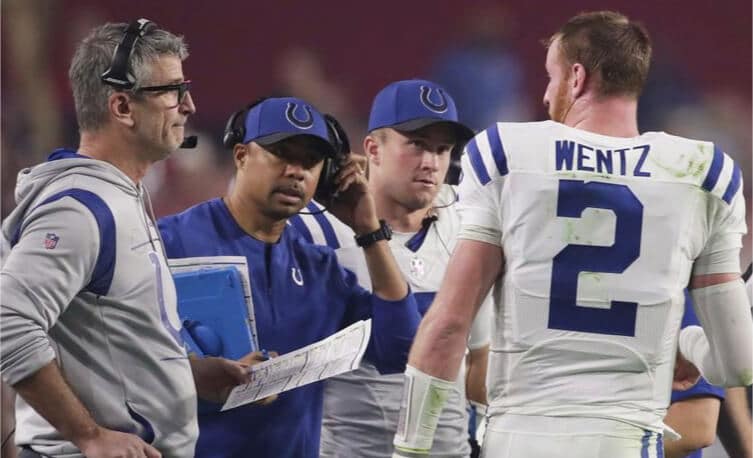 The 9-6 Indianapolis Colts look the part of a dark-horse Super Bowl contender, especially after their 22-16 win at Arizona last week. Winners of 8 of their last 10 games, Frank Reich’s team is inching closer to securing a postseason berth, and they should be favored in each of their final two contests of the season, including Sunday afternoon’s home showdown with the Las Vegas Raiders (8-7).

“The Colts check all of the boxes when it comes to what you’re looking for in a team poised for postseason success,” WynnBET Senior Trader Grant Tucker told Hoosier State Bets. “They have a workhouse in the backfield (Jonathan Taylor) that you can lean on come January, an above-average defense, and a quarterback in Wentz that you can rely on to play mistake-free football.”

We’ll get to Wentz shortly. As for the rest of the Colts roster, they’re playing fantastic football since a sluggish start to the season, and sportsbooks favor the home team to pick up win No. 10 this weekend.

If you’re betting on the Colts, it’s worth keeping close tabs on the availability of Carson Wentz. The unvaccinated quarterback was placed on the COVID-19 list earlier this week, but he still has a chance to play Sunday due to altered NFL quarantine rules that could see him cleared in time for kickoff.

FYI: Covid Reserve players do NOT have to test out of revised protocols.
Return to play is based on minimum 5 day isolation with normal temperature in final 24 hours and reduced symptoms.

Sam Ehlinger would likely get the start if Wentz can’t go. Regardless of the quarterback’s status, the Colts have to like the matchup of their rushing attack against just about any defense in the NFL. Taylor has 1,626 rushing yards in 15 games, and he’s averaging an impressive 5.5 yards per carry. He also has 17 rushing touchdowns, including four games with multiple scores.

Taylor’s superb season has him in the MVP hunt, and at a few sportsbooks he’s actually tied with Tom Brady (+600 at WynnBET) for the second-best odds to win the award. Aaron Rodgers is the heavy favorite at most books, however, and wagering on Taylor may be an unnecessary risk at this point in the season.

“This is historically a quarterback award and this year is no different,” Tucker said. “While Taylor is putting up tremendous numbers, he’s still several spots down on our odds board. This is Aaron Rodgers’ award to lose at this point. I think it helps Rodgers’ case a lot that the Packers are on Sunday Night Football this week at home against the Vikings as well.”

Taylor could have large running lanes this weekend, as the Colts activated a pair of offensive linemen from the COVID-19 list Wednesday, including standout left guard Quenton Nelson. If Wentz returns by Sunday, the Colts offense could be reasonably healthy, especially given how late it is in the season.

So, a week after playing without four offensive line starters, Colts likely have at least three back (Nelson, Kelly, Glowinski). Eric Fisher won't practice today but remains day-to-day (knee), and Braden Smith remains in Covid protocol, but could test out by game time.

The total for the game hovers between 44 to 45 points, depending on the sportsbook. WynnBET goes as low as 44 points with the total, while BetMGM, BetRivers, Betway, FanDuel, PointsBet, TwinSpires, and Unibet have the total at 44.5 points as of Wednesday afternoon. Caesars lists the total at 45 points.

The Raiders aren’t the only team with a bit of a recent under streak going, as three consecutive Colts games have gone under the point total. If Wentz can’t suit up, the under may be a popular bet Sunday.

Bennett Conlin is a sports betting reporter. He began his sportswriting career crafting recaps of family wiffle ball games. He’s covered more meaningful games since those early days, most recently writing about the University of Virginia’s athletic programs for The Daily Progress. Bennett can be reached at bconlin@bettercollective.com.

Bennett Conlin is a sports betting reporter. He began his sportswriting career crafting recaps of family wiffle ball games. He’s covered more meaningful games since those early days, most recently writing about the University of Virginia’s athletic programs for The Daily Progress. Bennett can be reached at bconlin@bettercollective.com.