Colts Are Heavy Favorites To Post Bounce-Back Win Over Texans 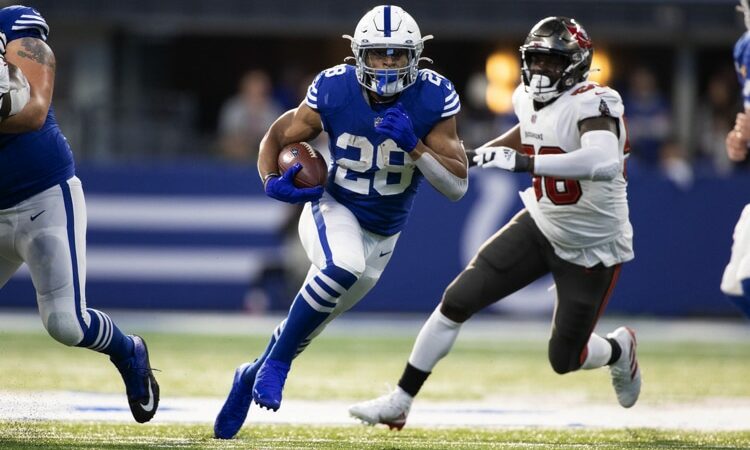 After missing an opportunity to tighten the AFC South race and strengthen their wild-card position, the Indianapolis Colts have the perfect opportunity to bounce back Sunday when they face the Houston Texans on the road.

The Colts (6-6) were denied a fourth straight victory last Sunday, falling 38-31 to the defending Super Bowl champion Tampa Bay Buccaneers after squandering a 10-point halftime lead. Carson Wentz threw for 306 yards and three touchdowns but also was intercepted twice and lost a fumble as Indianapolis committed a season-high five turnovers.

Indianapolis remains two games behind Tennessee for the division lead, but that is essentially a three-game deficit because the Colts were swept by the Titans. The Colts, who will have their bye after this game, are one-half game out of the three wild-card spots and will face division leaders New England and Arizona in their first two games following the bye.

Houston (2-9) was denied back-to-back wins in a 21-14 home loss to the New York Jets last Sunday. Tyrod Taylor threw a pair of first-half touchdowns, but the Texans were shut out in the second half and held to 202 total yards.

The Colts are trying to sweep the season series for the second straight year after rolling to a 31-3 home victory in Week 6, when Jonathan Taylor had 145 rushing yards and two touchdowns and Wentz threw for two scores. Taylor, who leads the NFL in rushing with 1,205 yards, has totaled 319 yards in three lifetime matchups with the Texans.

The line opened with the Colts -7, which many people jumped on and promptly drove higher throughout the week. The most common offering among Indiana sportsbooks is Colts -10, with the price either at -110 or -112, though PointsBet stands out at Colts -9 with a -110 offering as of midday Friday. DraftKings and Betway are offering -9.5 but with a premium on the low-side hook of a touchdown-plus-field-goal total at -115.

The over/under has a range between 44.5 and 46 points. Both Betway and DraftKings are on the low side, offering that number at -110 on both sides. No sportsbook is currently willing to sit on the flat total of 45, but the high-side hook of 45.5 points is a near-consensus offering at -110. WynnBET has opted for the high side at 46 points with -110 in both directions.

The low-side hook is in play for the Colts’ team total at multiple places with 27.5 points as the over/under. Caesars, Betway, and DraftKings are all offering -110 to the over, while BetMGM and WynnBET have a -105 listing for the under.

Prop plays to ponder for Taylor and Wentz

Carson Wentz is taking care of the football like never before. https://t.co/gkObNqaIvZ

Sportsbooks are in near lock-step on the over/under on Taylor’s rushing yards at 105.5. The Kambi platform powering Unibet, BetRivers, and TwinSpires ticks down to 104.5 yards with a -117/-113 split.

For the 1.5 over/under touchdown total play for Wentz, the best value for the over is at DraftKings and Betway at -140, while PointsBet leads the plus-money value plays to the under at +120. Those who think Wentz will throw an interception will be best-served at Caesars, where the 0.5 over is currently +130.

For anytime-touchdown scorers, oddsmakers view Taylor as practically a given to find the end zone — DraftKings and Betway are the best plays at -250, though Caesars does have a +180 offering for him to score two touchdowns. The breakdown for the top value among other potential scorers is as follows:

There could be potential value in playing the first-half spread for Colts backers, considering Indianapolis is third in the NFL with a plus-59 first-half point differential while the Texans rank 28th at minus-30. The Colts are also tied for the league lead with 179 first-half points, which could make plays on their team total worth a look.

The most common first-half spread being offered is Colts -6 at -110 where that number has been listed, though BetMGM is offering -4.5 at that same price. Betway and DraftKings are offering -110 for the Colts -5.5, while PointsBet is trying to woo bettors with even money at -6.5 points.