Jacoby Brissett will try to keep his former team winless as the Miami Dolphins welcome the Indianapolis Colts to South Beach. 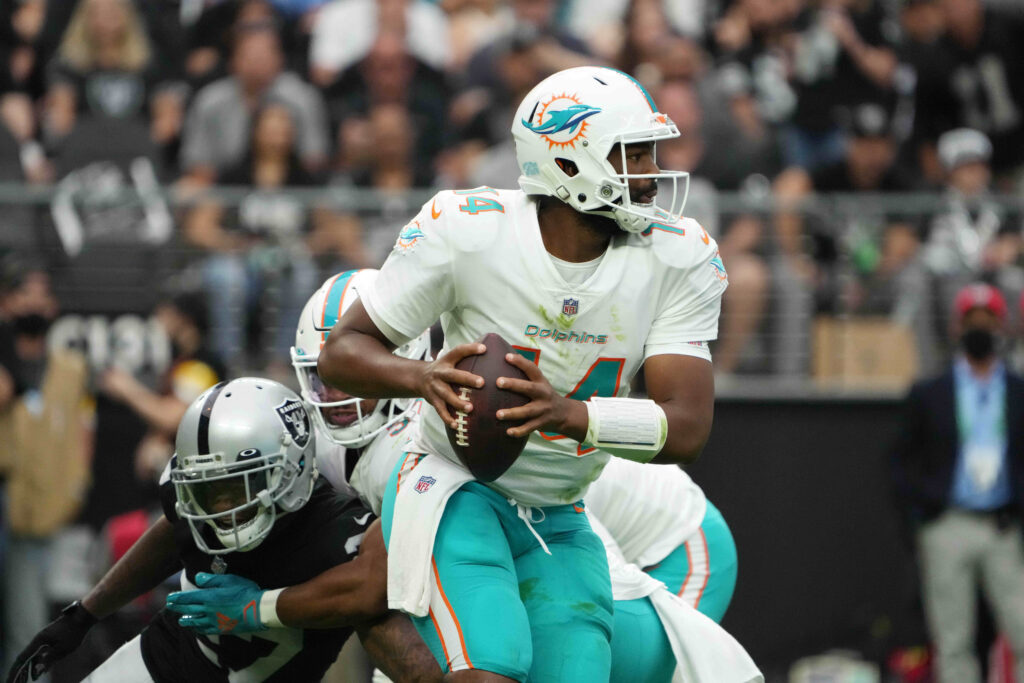 When Jacoby Brissett took his talents from Indianapolis to South Beach and joined the Miami Dolphins in the offseason, few expected him to impact Sunday’s Week 4 showdown at Hard Rock Stadium.

That’s the situation, however, as the former Colts signal-caller gets the start in place of injured Dolphins starter Tua Tagovailoa. Brissett, Indianapolis’ full-time starter in both 2017 and 2019, served as a backup to Philip Rivers last season before joining Miami.

The Colts still hope Carson Wentz is the answer at quarterback after acquiring him from the Philadelphia Eagles, but the early results have not been what they hoped. Indianapolis is trying to avoid its first 0-4 start since dropping the first 13 games of 2011 — also known as the gap year between Peyton Manning and Andrew Luck.

Wentz is also banged up, trying to play despite sprains to both ankles suffered in the Week 2 loss to the Los Angeles Rams. His mobility will be a huge issue considering All-Pro guard Quenton Nelson has been ruled out due to his own sprained ankle.

Indianapolis is in a tough spot considering this is the middle contest of a three-game road swing that concludes Oct. 11 at Baltimore, and Brissett showed himself plenty capable of directing Miami’s offense in last weekend’s 31-28 overtime loss at Las Vegas.

There’s no lack of action and offerings at sportsbooks across Indiana, and there is value to be had if you look closely enough.

Officially ruled OUT for Sunday vs. Miami:

The moneyline range is fairly tight for Colts backers, with FanDuel leading the way at +116 and closely tailed by DraftKings and PointsBet (both +115) and Kambi (+114). Every book has a plus-money offering, though BetMGM has the lowest at +105.

The first-half lines offer slightly more variety, with the Kambi platform listing Indianapolis +1.5, but also at -132. DraftKings is offering the Colts +1 at -125, while other books have them as half-point underdogs at varying levels. FanDuel offers the best value on such a play at -110, with others ranging up to -120.

The three-way moneyline in the first half is a place where value can be found — FanDuel has the Colts +130 and Kambi +118 — compared to the standard offering. For traditionalists, FanDuel again is the top option at +112, though PointsBet, Caesars, and WynnBET all lurk close behind at +110.

Betting interest usually perks up when the phrase “revenge game” gets thrown around, and such is the case with Brissett facing his former team. The Dolphins QB can be grabbed as high as +440 at Caesars as an anytime touchdown scorer and is a +1900 option at FanDuel to be the first touchdown scorer.

Among sportsbooks that have set an over/under for Brissett’s passing yards, Kambi has a -114/-115 split for 209.5 yards, while DraftKings, Caesars, PointsBet, and BetMGM are all offering -115 both ways 1 yard lower. DraftKings and BetMGM have plays for Brissett’s combined passing and rushing yards, with the former at 227.5 (-115) and the latter 228.5 (-115).

BetRivers and Unibet have the best play for Brissett to toss at least two TD passes against his former team at +138, while DraftKings, PointsBet, and BetMGM are close behind at +135. Caesars has the top value for Brissett not to throw an interception at +130, though he is -160 there and at BetMGM to get picked off at least once.