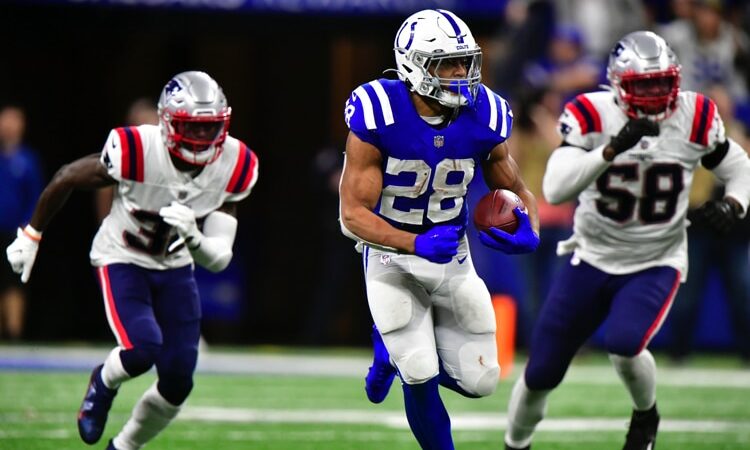 Looking to keep pace in the constantly changing AFC playoff picture, the Colts take to the road for the holidays as they face the NFC West-leading Arizona Cardinals on Christmas night.

The Colts (8-6) currently hold the top wild card spot as the No. 5 seed, but there are five teams in the AFC with an 8-6 record and another five at .500 or better. The wild card appears to be the most likely path to the postseason for Indianapolis, which is one game behind Tennessee for the AFC South lead but loses a head-to-head tiebreaker with the Titans after being swept in the season series.

Frank Reich’s team has won five of its last six and is coming off a 27-17 victory over New England Saturday. Jonathan Taylor, well on his way to the rushing title with 1,518 yards, burnished his MVP credentials by gashing the Patriots for 170 yards on 29 carries. The second-year running back is a distant third option behind Tom Brady and Aaron Rodgers, but given his increased workload of late, Taylor has an outside chance at 2,000 yards — a feat accomplished just eight times in NFL history.

He can still be grabbed at +900 at FanDuel and +800 at BetMGM and Caesars to be the fifth Colts player to win the MVP award, along with quarterbacks Johnny Unitas, Earl Morrall, Bert Jones, and Peyton Manning. Taylor has eight 100-yard games this season and has cleared 140 in four of the last six.

Arizona (10-4) is looking to avoid a third straight loss after ripping off seven wins to start the season. In a span of two games, the Cardinals have fallen from the No. 1 seed in the NFC to No. 4 following a humbling 30-12 road loss at one-win Detroit last Sunday that may have qualified as the biggest NFL upset of the season considering they were nearly two-touchdown favorites.

The offense is a concern after failing to score a touchdown in four trips to the red zone, with Kyler Murray benched in the fourth quarter due to ineffectiveness. Murray, who has thrown for 3,039 yards and 20 touchdowns while adding another 270 rushing yards and five scores in 11 games, was named to the Pro Bowl on Wednesday night.

Arizona has gone 4-0 against AFC teams this season, averaging 34.3 points and 409.5 yards while scoring at least 31 in all four contests. The Colts are 1-3 in interconference matchups, suffering losses to 10-win teams the Los Angeles Rams and the reigning Super Bowl champion Tampa Bay Bucs as well as the Seattle Seahawks.

Despite the contrast in recent form, the line for this game has shown little movement since opening with the Cardinals a 1-point favorite. Most Indiana sportsbooks have remained on that number, with -110 a near-universal offering for Colts backers. FanDuel is on an island at Colts +1.5 at -110.

The first signs of small variances are on the moneyline, with a handful of places — DraftKings, BetRivers, Unibet, Caesars, WynnBET, Betway, and FanDuel — offering even money (+100). The total over/under is where line-shopping comes into play, however, as some books are offering a low-side hook at 48.5 points or a flat touchdown total of 49.

On the lower number, PointsBet, DraftKings, and Betway all have -110 in both directions, while FanDuel has a -112/-108 split. BetMGM, Caesars, theScore Bet, and WynnBET are all playing 49 at -110, while the Kambi platform for BetRivers, Unibet, and Twinspires has a -108/-113 offering.

"I absolutely think Kyler Murray has the ability and the God-given athleticism, the arm talent, all of that, he's got it all. Now he needs to prove it."

With a tight overall spread comes an even tighter first-half spread at some books. As a result, even a half-point difference is priced significantly, which means bettors may be better served considering moneyline offerings for the first two quarters. Also notable as it pertains to first-half wagering is that the Colts lead the league with a +90 point differential, while Arizona is seventh at +43.

To show one example of the noted changes in value, WynnBET is offering the Colts +0.5 points at -125 in the first half. Contrast that with its -105 play on the straight moneyline and +102 for the 3-way moneyline. FanDuel currently has the best value for that half-point at -120, while Betway and DraftKings are listing -130 for the Colts +1, and the Kambi platform is -141 at Colts +1.5.