Colts At Critical Juncture Heading Into SNF Showdown Versus 49ers

Are the Colts back? A pivotal matchup versus San Francisco may provide the answers. 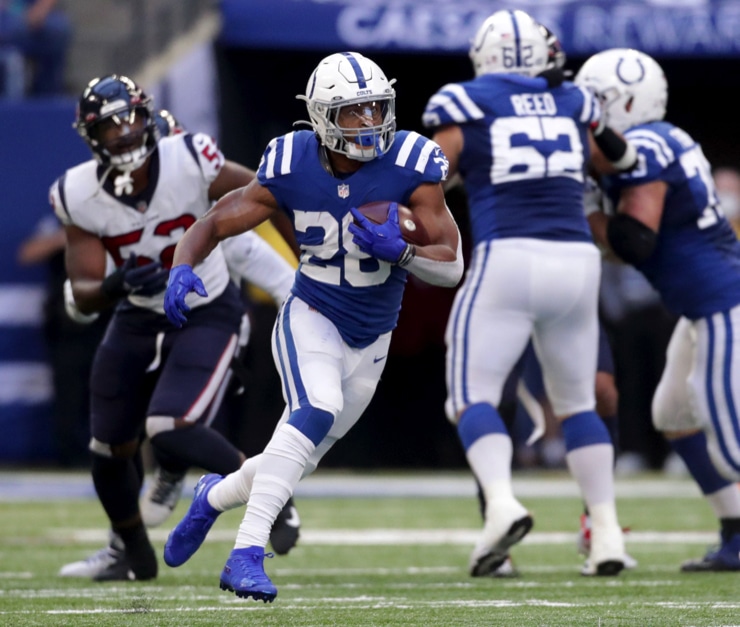 Coming off their best performance of the season, albeit against an overmatched opponent, the Indianapolis Colts look to post back-to-back victories for the first time this season in a Sunday Night Football showdown on the road versus the San Francisco 49ers.

Indianapolis (2-4) has won two of three after an 0-3 start and enters this weekend in sole possession of second in the AFC South despite its sub-.500 record. The Colts hammered the Houston Texans 31-3 at home last Sunday, as Jonathan Taylor ripped off an 83-yard run en route to a season-best 145 yards and Carson Wentz threw for 223 yards and a pair of scores.

The 49ers (2-3), however, are a notable step up in caliber of opposition compared to the hapless Texans and desperate for a victory to stay in the NFC West race. San Francisco has dropped three straight since opening with wins over Detroit and Philadelphia and stewed through its bye week following a 17-10 loss to unbeaten Arizona on Oct. 10.

Jimmy Garoppolo is expected to be back under center with rookie quarterback Trey Lance sidelined due to a sprained knee after accounting for 281 yards of total offense versus Arizona. Garoppolo missed that game with a sore calf and has thrown for 925 yards and five TDs in his four starts.

Indianapolis has struggled to gain traction against NFC West opponents this year, losing at home to both the Los Angeles Rams and Seattle in the first two weeks of the season. With both teams searching for consistency, sportsbooks across Indiana have been trying to find the best number for bettors to consider for their wagers.

A home run hitter breaking down his swing. pic.twitter.com/FYuUEbnEKf

Most sportsbooks in the Hoosier State are currently settled on the Colts +4, which is a slight move in their favor from the opening line of +4.5. Only FanDuel remains on the original number, offering -114 for the underdogs. Of those with the Colts +4, PointsBet (-107) and the Kambi platform — providing listings for BetRivers and Unibet (both -109) — are offering better than the standard -110.

The moneyline has a similarly narrow band, with FanDuel (+176) edging out theScore Bet and Kambi (both +175) as the top play, and Caesars, WynnBET and PointsBet all lurking at +170.

PointsBet and WynnBET are trying to attract those who are bullish on the Colts offense, with the former offering -105 and the latter +100 for over 20 points. The half-point is looming large on the team total over/under, as FanDuel’s -114 is the best play on the over at 19.5 points, which ranges up to -130 at BetMGM.

The uncertain availability of wide receiver T.Y. Hilton, who is questionable with a quad injury, has created a ripple effect of limiting plays on yardage props for the Colts wide receiving corps. Another factor is a weather forecast calling for heavy rain in the Bay Area on Sunday night, which could make passing difficult.

Sportsbooks have posted two numbers for the over/under on Taylor’s rushing yards: 62.5 and 64.5. For the lower number, BetMGM and Caesars both have -115 as the top value for the over, while FanDuel and PointsBet are offering -114 both ways on the higher number.

A look at those first-half plays

BetRivers and Unibet are testing Colts backers with a +2.5 first-half line at -110, the only books straying off a flat +3. DraftKings leads the way on the higher number at -105, compared to -110 elsewhere. While theScore has the best standard moneyline play for the first two quarters at +165, FanDuel’s three-way play gets you a little more with Indianapolis +170 on that offering.

FanDuel is also flying solo with a first-half total of 22.5 points with a +105/-125 split. The high-side hook of 21.5 points is the most common offering, as both PointsBet and Caesars have the over at even money and BetMGM the best play on the under at -110. DraftKings and WynnBET are offering -110 both ways on a flat 21.

One area everyone is in agreement on is the Colts’ first-half team total of 9.5 points. WynnBET is offering -105 on the over despite the low-side hook, while Kambi is doing likewise for the under.

Photo by Jenna Watson via IndyStar