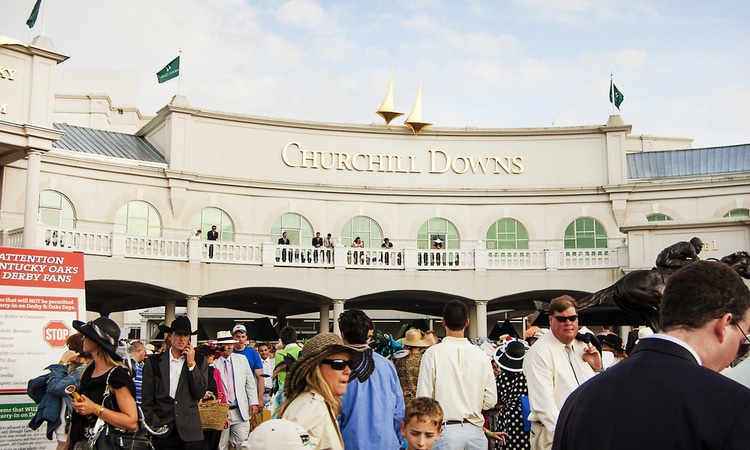 A motion to issue an intertrack wagering license to Churchill Downs Inc. for the 2022 racing season failed to pass at last Thursday’s Illinois Racing Board meeting, leaving the racing and gaming company on the outside looking in for off-track betting in the state.

The 5-5 vote added another layer to what have been at times fractious and contentious dealings with Churchill Downs, which entered a purchase agreement to sell the parcel of land in Arlington Heights where Arlington International Racecourse is located to the Chicago Bears for $196.2 million in late September. Arlington Park did not submit a race schedule for the 2022 season and there will be no racing at the track for the foreseeable future.

CDI, which also has a majority stake in Rivers Casino in Des Plaines approximately 15 miles from the track, opted not to pursue a racino license at Arlington Park in 2019 after years of lobbying for the opportunity to do so, incurring the wrath of the horse racing industry in the state as well as legislators and some board members.

Arlington Park was operating six off-track betting parlors around the state, four of which have been picked up by Hawthorne Race Course. In order for the Stickney-based track to operate more OTBs, it would require a change in legislation, though it is also possible Hawthorne could shutter some of its lower handle-generating OTB sites in order to operate the other two if they are more economically viable.

Taking on the additional OTB sites is another example of Hawthorne adding to its already challenging burden of trying to help the struggling horse racing industry along as the only track in the northern half of the state. It will have a year-round schedule in 2022, alternating between thoroughbred and standardbred racing that will require multiple “flips” of the track surface.

FanDuel Sportsbook and Horse Racing, which was known as Fairmount Park until being rebranded in March, is the lone track in the southern half of the state along the Missouri border near St. Louis. Both tracks have plans to expand into racinos as permitted by Illinois Gov. JB Pritzker’s gaming expansion bill signed into law in 2019, though both projects are still in their very early stages.

Churchill Downs Inc. has been in the crosshairs of Commissioner Alan Henry from nearly the moment he joined the IRB in February. The former horse racing writer for the Chicago Sun-Times offered some harsh critiques throughout the year as Arlington Park withered on the vine throughout the racing season, capped with what could best be described as a watered-down final version of its signature race, the “Arlington Million” that was renamed the “Mr. D Stakes” since it did not offer a seven-figure purse.

Henry was again irascible at times during the question-and-answer process about CDI’s hunt for a new property to at some point resume offering live thoroughbred racing, with CDI Chief Operating Officer William Mudd being vague at times due to the ongoing nature of the location scouting while also saying it wanted to again pursue a racino. But it was fellow commissioner Ben Reyes who provided the most pointed comments for Mudd as the intertrack wagering license discussion took place.

“What’s to convince us that you are looking for something? I don’t think you guys are,” said Reyes, who felt CDI’s business model was flipping tracks for profit and cited CDI’s purchase of Calder Race Course in Miami and using jai alai instead of horse racing for parimutuel wagering once it obtained a casino license. “I would recommend to the commissioners that maybe we not give you a license and only consider giving you a license once you come up with a new site. That way, you have some motivation to move up finding a location if that’s really what you have in the back of your mind.

“What’s there to show that you guys operate on good faith? I don’t see anything. I’m not convinced of anything that you can do that would help the horse racing industry here.”

Churchill Downs was able to obtain an advance deposit wagering license (ADW) for use at FanDuel Sportsbook and Horse Racing for the 2022 season, with former IRB Chairman and current track counsel William Berry saying it would help grow the racing purses for the track in the southern part of the state. That passed by a 9-1 vote, with Henry the lone holdout.

The other piece of news from the meeting was Chris Block being elected president of the Illinois Thoroughbred Horsemen’s Association. Block, who will take the office Jan. 1, defeated sitting president Mike Campbell, who had served in the position since 2008. Block, who has previously served on the ITHA Board of Directors as both a trainer and owner, is one of the top breeders in the state.