Carson Wentz To Be Reunited With Frank Reich In Indianapolis, Hoping To Salvage His Career

Carson Wentz was traded to the Indianapolis Colts Thursday and will team up with his former offensive coordinator Frank Reich. 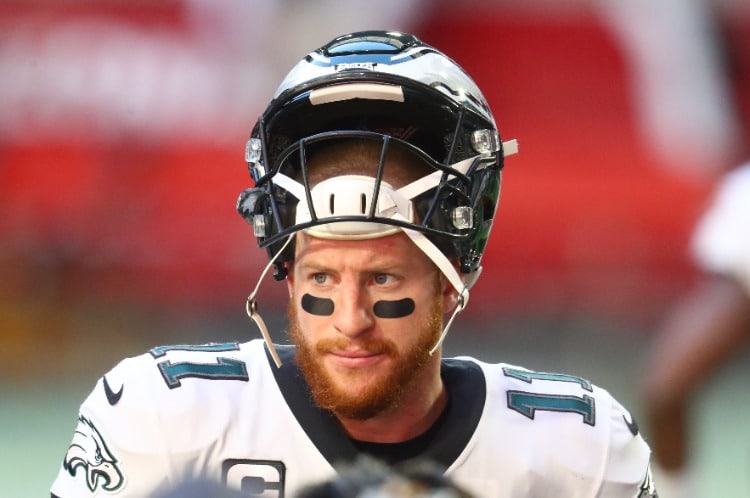 Of course, we’re referring to the Colts trading for Carson Wentz, the former Philadelphia Eagles quarterback who fell out of favor in Philly quicker than you can say, “We shoulda kept Nick Foles.”

Wentz, who in 2017 led the NFL in total QBR (78.5) and set an Eagles franchise record 33 touchdown passes, is now reunited with his then-offensive coordinator, Frank Reich.

Reich knows Wentz, and Wentz knows Reich, and so the only question remaining is: Can Wentz still play the game after a brutally horrific 2020 campaign, where he was eventually benched for rookie Jalen Hurts?

For Colts fans, the answer better be “yes,” although in the grand scheme of things, giving up a third round pick next year and a conditional second rounder in 2022 is probably worth the chance.

Additionally, the Eagles are on the hook for $33.8 million in dead cap money, meaning the Colts get to test drive Wentz for practically nothing.

To give some idea of Wentz’s 2020 season, he led the league in sacks taken, fumbles, and interceptions — and he was benched at the three-quarter mark of the season.

The Colts — recently off a playoff run and a near-upset of the Buffalo Bills in Orchard Park — were installed as +2000 (on BetMGM) to +2900 (on FanDuel) longshots to win the Super Bowl next year.

And as a result of the trade, odds on the Colts chances for 2021 moved the sum total of … well, zero (though to be fair, BetMGM had previously brought the Colts odds up to +2500, and lowered them back to +2000 on news of the Wentz deal).

Per the trading team:

Apparently, the majority of the sportsbooks either baked in the idea of Wentz coming to Indy, or they view him as basically a zero-sum difference.

Strong cast in for Wentz

Wentz comes to Indianapolis with a strong supporting cast. The Colts offensive line ranked seventh in Pro Football Focus’ end of the year ranking, and that came with some late-season injuries. For comparison purposes, the Eagles O-line was ranked 19th by PFF.

The Colts also have a young and talented skill position core, with Jonathan Taylor leading the way at running back and Michael Pittman Jr. on the verge of a potential breakout at wideout. Of course, Wentz will also have T.Y. Hilton and a cadre of athletic tight ends to throw to.

But in the end, it’s going to come down to a simple question: Is Wentz washed, or is Wentz ready for a Reich rinse and repeat?