It may have lost a little luster, but an East Division showdown between Big Ten rivals Ohio State and Penn State highlights the second weekend of conference action for bettors across Indiana and Illinois. 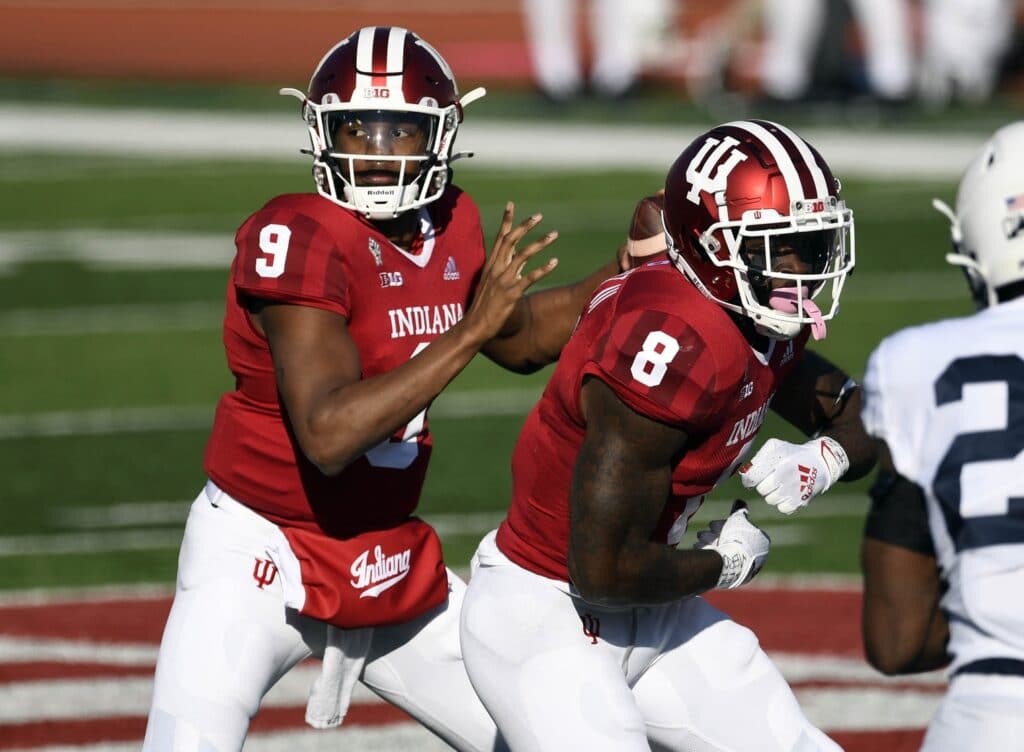 It may have lost a little luster, but an East Division showdown between Big Ten rivals Ohio State and Penn State highlights the second weekend of conference action for bettors across Indiana and Illinois.

Six of the seven games scheduled are being played following the mid-week cancellation of Saturday’s contest between No. 9 Wisconsin and Nebraska due to a spike of positive COVID-19 cases among Wisconsin football players and head coach Paul Chryst. The primetime clash between the No. 3 Buckeyes and 18th-ranked Nittany Lions offers an early inside track to the East Division lead as the Big Ten has opted for a Champions Week format to close the season in which the order of finish dictates a cross-division matchup.

Illinois bettors cannot place bets on in-state teams, with wagers on the Illini-Purdue and Northwestern-Iowa games unavailable in the Prairie State. Those interested in betting those contests must cross the border to Indiana or Iowa to find available betting lines.

A pair of teams coming off bruising losses collide in College Park, where host Maryland is a sizable underdog to Minnesota. The Golden Gophers, who were blasted 49-24 at home by Michigan, are favorites ranging from 19.5 points at FanDuel (-112/-110) to 20.5 points at both BetRivers (-109/-112) and BetMGM (-110). PointsBet currently splits the difference and lists P.J. Fleck’s team as 20-point favorites at the standard -110.

PointsBet is offering the best moneyline play for Minnesota at -975, with FanDuel the most confident in a Gophers victory at -1200. Conversely, for those feeling the Terrapins will put forth a much better showing than last week’s 43-3 thrashing administered by Northwestern and even their record at 1-1, FanDuel is offering them at +680 followed by BetRivers (+650), PointsBet (+640), and BetMGM (+620). FanDuel is also offering an odds boost of +320 for the Gophers winning by 31 or more points from a +250 listing.

Looking to capitalize on Indiana’s stunning upset of Penn State last weekend, PointsBet is running a crowd booster promotion for Saturday’s contest versus Rutgers. For every 200 bets placed on the 17th-ranked Hoosiers, it moves the moneyline in bettors’ favor. It opened at -420 and has shifted to -150 as of 10:30 a.m. CDT on Friday morning.

One area of curiosity is the value on the first-half lines for this game. While all four books list the Hoosiers as 6.5-point favorites, their price ranges from -110 at PointsBet to -120 at FanDuel. Rutgers, meanwhile, is even money (+100) at FanDuel but as high as -120 at BetRivers and -118 at BetMGM. FanDuel and BetRivers are both offering 27.5 points at evens for the over for the first two quarters, while BetMGM and PointsBet are offering 27 at -115/-112 and -110, respectively.

All four sportsbooks are in alignment, offering the Buckeyes as 11.5-point favorites after they throttled Nebraska 52-17 behind an impressive performance from quarterback and Heisman Trophy candidate Justin Fields, who completed 20 of 21 passes for 276 yards and a pair of touchdowns. FanDuel and BetRivers have moved slightly off the standard -110, with FanDuel split -108/-112 and BetRivers offering -108/-113.

The moneyline has a larger bandwidth, with the best Ohio State offering of -400 at BetMGM and ranging as high as -455 at BetRivers. Bettors thinking Penn State will regroup from its controversial 37-36 overtime loss at Indiana and spring an upset in Happy Valley can grab the Nittany Lions at either +320 on FanDuel and PointsBet or +310 at BetMGM and BetRivers.

Elsewhere in the Big Ten

State bragging rights are on the line in Michigan, where the 13th-ranked Wolverines are heavy favorites against Michigan State. BetMGM has Michigan as 25-point favorites at -110 in each direction, while BetMGM is offering one-half point lower. That gets flipped for the over/under, with BetMGM on the low side at 51.5 points and BetRivers sporting 52.

Purdue — which defeated Iowa without star wide receiver Rondell Moore — is a 7.5-point favorite across the board at Illinois, ranging from -105 at PointsBet to -113 at BetRivers, despite uncertainty over his availability for this game. Boilermakers coach Jeff Brohm, who also missed last weekend’s 24-20 win as he completed a COVID-19 isolation period, is expected back on the sidelines.

Boilers backers can grab them as low as -278 on the moneyline at BetMGM, while those feeling the Illini will bounce back from their thumping at Wisconsin last Friday can find them at +240 on FanDuel. The over/under is 58 at BetRivers with a split of -113/-108 and 58.5 points elsewhere with FanDuel offering -112/-108 and both PointBet and BetMGM listing the standard -110.

Northwestern will look for back-to-back wins as it travels to Iowa and enters Kinnick Stadium as slight underdogs. The Wildcats are 2.5-point underdogs across all four books, with only BetRivers straying from the standard with a -109/-112 offering. PointsBet has the best moneyline offering for Northwestern at +115, while BetMGM is the leader for Iowa backers at -134.

No. 4 Notre Dame (5-0, 4-0 ACC) is on the road for the second straight week and is a favorite of nearly three touchdowns at Georgia Tech as it looks to continue chasing defending CFP champion Clemson in the ACC. The Irish have allowed just 49 points on the season and are coming off a 45-3 rout of Pittsburgh last weekend as Ian Book threw for 312 yards and three scores.