Underdog Bears Out To End Skid In MNF Clash With Steelers 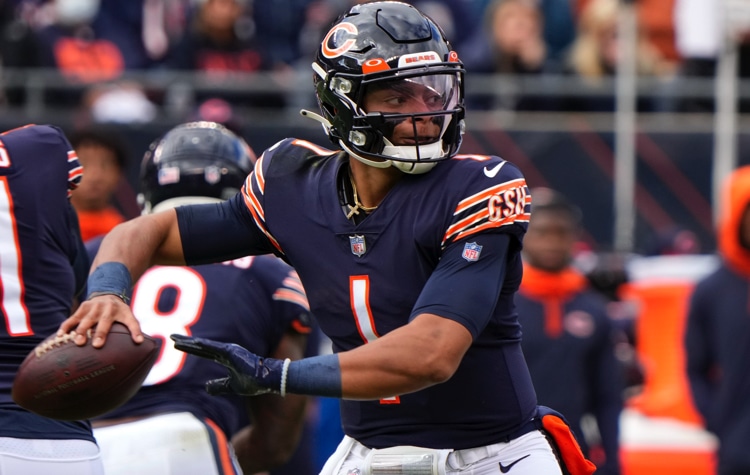 The Chicago Bears have a chance to reclaim second place in the NFC North, but face a difficult task in ending their three-game losing streak with a matchup at Pittsburgh on Monday night to cap Week 9 of the NFL season.

The Bears (3-5) enter the game tied with Minnesota for second in the division, and a win would help in terms of staying in the race for one of the three NFC wild-card spots. Rookie quarterback Justin Fields showed signs of improvement in Chicago’s 33-22 loss to San Francisco on Oct. 31, throwing for 175 yards and a touchdown while adding 103 yards and an electrifying scoring romp on the ground.

The defense, though, has endured tough times the last two weeks as reigning Super Bowl champion Tampa Bay and the 49ers gashed it for 71 points and 875 yards. The Bears will again be without edge rusher Khalil Mack, who is sidelined with a foot injury, and safety Eddie Jackson is listed as doubtful with a hamstring injury.

Pittsburgh (4-3) has won three straight and is also looking to keep sole possession of second place in its division. The Steelers stifled AFC North rival Cleveland 15-10 on the road on Halloween, holding the Browns to 306 yards while Ben Roethlisberger threw a pair of second-half touchdown passes.

Mike Tomlin’s team carries a lengthy home winning streak on Monday Night Football, having reeled off 18 straight victories in the league’s showcase game since a 23-20 loss to the New York Giants on Oct. 14, 1991. There is a caveat to the streak, as the Steelers did lose a home game played on a Monday night last year, but their 23-17 defeat to the Washington Football Team was played after the game was moved back one day due to a COVID-19 outbreak in Baltimore that postponed a scheduled Ravens-Steelers game on three occasions.

Got a touchdown to give or take?

#Bears-Steelers predictions from our crew:

The line opened at Steelers -5.5, and enough money has sided with the hometown team throughout the week to push it higher. All six mobile operators in Illinois were offering the Bears +7 as of 9 a.m. CST on Monday morning, with BetRivers (-107) leading the way, followed by PointsBet (-110) and Barstool Sportsbook (-112). Caesars, FanDuel, and DraftKings are all offering -115 for the points.

Given the recent proficiency of Pittsburgh’s defense, coupled with Fields being a rookie quarterback, the over/under notably trended down from its opening number of 45.5 points. It has a current range between 39 and 40 points, with Caesars (-110) on the low end and DraftKings (-110) claiming the high ground. Of the four listings at 39.5 points, only FanDuel has moved off the standard -110 offering with a -114/-106 split.

The best play on the moneyline for a Bears victory can be found at Caesars and BetRivers, which are both offering +260. Barstool and PointsBet lurk at +250, with FanDuel (+245) and DraftKings (+230) rounding out the listings.

Given Fields’ dual-threat capabilities, the offerings on his prop plays extend into rushing yards. That also has come at the expense of yardage props for running backs Khalil Herbert and David Montgomery, with no one listing over/under yardage plays for the duo.

Fields has not had a multi-touchdown game passing, which makes the over/under of 1.5 TD passes a tantalizing play at plus value on the over. There are two options, with PointsBet offering +200/-276 and FanDuel +186/-245. For those on the 0.5 TD toss play, Caesars is the best over at -200, while Kambi has a +170 play for the Steelers not to yield a scoring pass to Fields.

The 0.5 interceptions over/under has plus money at every book with the listing, and FanDuel has the top price at +124. Caesars’ -145 is the best option for those who think Fields will throw an INT.

Despite the lack of over/under yardage plays for Bears running backs, Herbert and Montgomery are on the board in most places for anytime touchdown scorers. Barstool and BetRivers have a +180 offering for Herbert and +275 for Montgomery as the top option.

Fields can be grabbed at +400 at FanDuel and PointsBet, with the Kambi platform close behind at +390. For Allen Robinson and Darnell Mooney, DraftKings has the highest value offering at +350 for both to find the end zone. Tight end Cole Kmet is a +400 or higher choice across the board, with DraftKings +500.

Yup! We’ll be in Pittsburgh around 430. Whole @barstoolchicago is coming as well. Will tweet out where we’re tailgating beforehand so people can come say what’s up. https://t.co/lxyttjLqft

Let’s start with the moneyline options, where FanDuel (+205) and Caesars (+200) are the top standard two-way plays on the Bears, though FanDuel’s +240 on the three-way is the highest across the board. DraftKings and PointsBet each have +190 on a standard moneyline, while Kambi sits at +185.