Hoosiers have plenty of betting options on the Bears and Colts as the NFL enters Week 12, though futures on Chicago are looking rough. 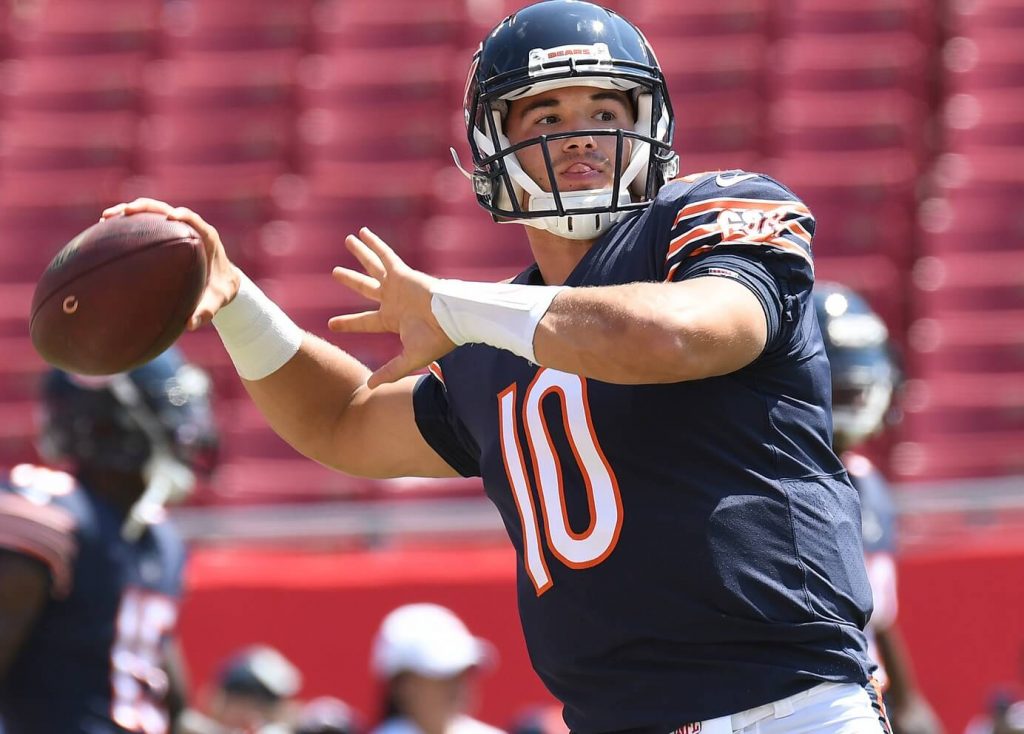 Mitch Trubisky’s hip isn’t the only thing hurting with the Chicago Bears — so are their playoff odds.

After Sunday night’s 17-7 loss to the Los Angeles Rams dropped the Bears to 4-6 and four games behind their archrivals, the Green Bay Packers, in the NFC North, Indiana oddsmakers are taking a dim view of the “Monsters of the Midway” regaining their form to make a postseason push.

The Bears are now longshots across the board to win the NFC North, with both DraftKings and BetRivers sportsbooks offering them at +6600 to overtake both Green Bay and Minnesota with six games remaining. FanDuel, meanwhile, feels the division has already been reduced to a two-team race and dropped Chicago to +20000 — lumping the Bears together with the last-place Detroit Lions.

Their odds of winning both the NFC and the Super Bowl have plummeted during this swoon which has seen the Bears lose five of six since a 3-1 start. DraftKings and BetRivers have knocked Chicago down to +8000 for the former and +20000 for the latter, and FanDuel sees the Bears as a +18000 option to claim the conference and a +25000 choice to win the Super Bowl.

Much of the Bears’ struggles have revolved around the offense and Trubisky, with the third-year quarterback surprisingly pulled late in the fourth quarter versus the Rams. The team said it was due to a left hip injury, but the timing of Trubisky’s exit prompted speculation on social media that coach Matt Nagy was providing cover for his beleaguered signal-caller.

#Bears QB Mitch Trubisky’s mood after the game seemed to tell the story. He spoke like a quarterback who was benched, not hurt. If he was playing well, he would have played on. He seemed to know it, too.

My column after a chaotic interview period: https://t.co/iD6WNWG4wm

Trubisky completed 24 of 43 passes for 190 yards with a touchdown and an interception. It was the third straight game Trubisky threw for less than 200 yards, and his 1,580 for the season are the fewest among quarterbacks who have played at least nine games. The Bears rank 28th in the league in scoring at 16.9 points per game, and three of their six losses have come despite holding opponents to 17 or fewer points.

Plenty of promise for the Colts

As the Bears’ fortunes sag, the Indianapolis Colts have the opportunity to bolster their playoff chances with a key AFC South showdown at Houston to kick off Week 12 on Thursday night. The winner will claim sole possession of first place, and a Colts victory would give them a sweep of the season series and the all-important head-to-head tiebreaker.

Both DraftKings and BetRivers have listed the Colts as 4-point underdogs, while FanDuel has the Colts getting 3.5 points. DraftKings is offering the best moneyline option for the Colts at +180, followed by FanDuel (+175) and BetRivers (+174). The Colts won the first meeting 30-23 at home in Week 7 as Jacoby Brissett had career highs of 326 passing yards and four touchdowns.

Brissett returned from a one-game absence due to a knee injury as Indianapolis cruised to a 33-13 victory over Jacksonville on Sunday. He completed 15 of 24 passes for 148 yards with a touchdown and an interception, while the ground game picked up the slack as both Marlon Mack and Jonathan Williams rushed for over 100 yards.

The Colts finished with a season-high 264 rushing yards, but Williams will be the primary back after coach Frank Reich announced Mack — who leads the Colts with 862 yards — underwent surgery for a fractured right hand and is out indefinitely.

Marlon Mack needs surgery on his fractured hand and is out indefinitely, per @AdamSchefter pic.twitter.com/f6XA6RmUQq

Williams entered Sunday’s game with two carries for one yard before getting 13 rushes for a career-best 116 yards against the Jaguars. He will be facing a Houston Texans defense that was gashed for a season-worst 263 yards in a 41-7 mauling by AFC North-leading Baltimore. It was the first time in eight games the Texans had allowed over 100 rushing yards.

The Colts are a solid value pick to win the South, being offered at +170 on FanDuel and +150 on DraftKings/BetRivers as a second choice to the Texans. FanDuel is offering a slightly better payout on Indianapolis to win the AFC at +2700 compared to +2500 on the other two sites, as well as +6000 to win Super Bowl LIII compared to +5000 at DraftKings and BetRivers.