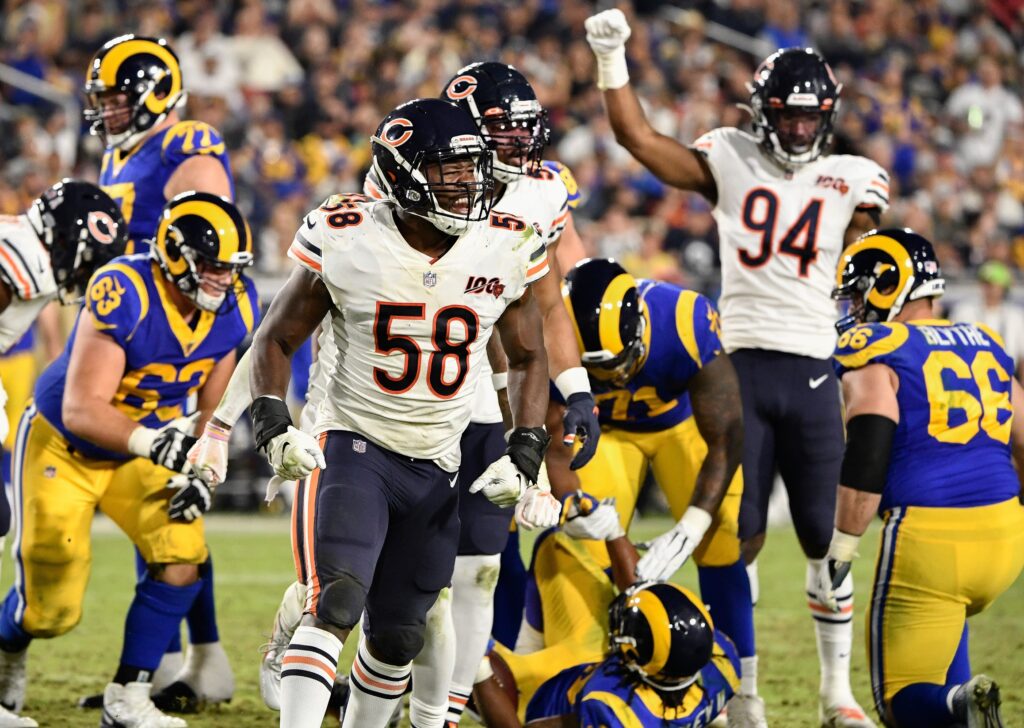 The Chicago Bears wrap up Week 7 as notable underdogs in their Monday Night Football contest on the road versus the Los Angeles Rams, and bettors in Illinois may have to do some digging at various sportsbooks to find their best plays.

Chicago (5-1) needs to win this game to reclaim sole possession of first place in the NFC North, entering this contest tied with archrival Green Bay. Los Angeles (4-2), meanwhile, has a chance to move into a tie for second with Arizona and one-half game behind Seattle in the highly competitive NFC West after the Cardinals dealt the Seahawks their first loss Sunday night.

It is the third straight year the teams are playing each other, and if the previous two are any indication, it figures to be tightly contested and low-scoring. Each team has a victory, with the Rams recording a 17-7 win at home last year and the Bears doing so 15-6 in Chicago in 2018.

Sportsbooks across state largely in alignment

As of 11:05 a.m. CDT on Monday morning, the rarest of occurrences had taken place as all five online/mobile sportsbooks in Illinois had the exact same listings — the Rams -6 and the over/under set at 44.5 points. DraftKings, though, then had a few instances of ticking to Rams -6.5 with a split of -103/-120 and has gone back and forth in morning wagering.

For the books offering the Rams -6, PointsBet was offering -105 in both directions, with BetRivers close behind at -107. DraftKings and William Hill were offering a standard -110 while FanDuel had a split of -114/-106. The moneyline has a relatively narrow range of offerings, with Bears fans able to get +230 on an outright victory at PointsBet, +225 at DraftKings, BetRivers, and FanDuel, and +210 at William Hill.

The real competition for bettors’ dollars in this game comes with the player props, where single yards and variable lines could make all the difference in hitting over/unders. Those ranges begin with the over/under on passing yards for Bears quarterback Nick Foles, starting as low as 243.5 yards at FanDuel (-110) to as high as 249.5 at PointsBet (-104/-162) and DraftKings and BetRivers (+102/-125). Rams counterpart Jared Goff can be grabbed anywhere from 245.5 yards at FanDuel (+110) to 250.5 at DraftKings and BetRivers (+116/-143).

An interesting distinction between the two is the spread on the over/under of 1.5 touchdown passes. Oddsmakers are not overly sold on the Bears passing game as Foles has a +112/-139 split at BetRivers for that play compared to -155/+120 for Goff, who is also getting -140/+120 at William Hill. BetRivers also lists Goff as a slight favorite (-114) to pass for more yards than Foles (-109).

Bears wideout Allen Robinson III has the highest over/under for receiving yards, with DraftKings offering 71.5 yards (-112) and William Hill, FanDuel, and PointsBet ticking one yard higher. Tight end Jimmy Graham has some wide-ranging plays, with PointsBet offering 28.5 yards at its standard -115, with DraftKings splitting that same number at -143/+115. FanDuel, meanwhile, is offering 31.5 yards at -110.

Montgomery is the only player on either side expected to score a touchdown, with DraftKings, BetRivers, and PointsBet all offering -112, but FanDuel is offering +120 for the Bears back to hit paydirt. That same discrepancy is also available for Henderson, with FanDuel listing him at +150 compared to +110 at the other three books. The spread is more narrow for Robinson, with FanDuel offering +155 versus +145 elsewhere.

Conversely, Woods is a +155 listing at FanDuel and +165 at the other three books, while Kupp rates slightly more likely to score a touchdown at DraftKings, BetRivers, and PointsBet (+165) compared to FanDuel (+170).