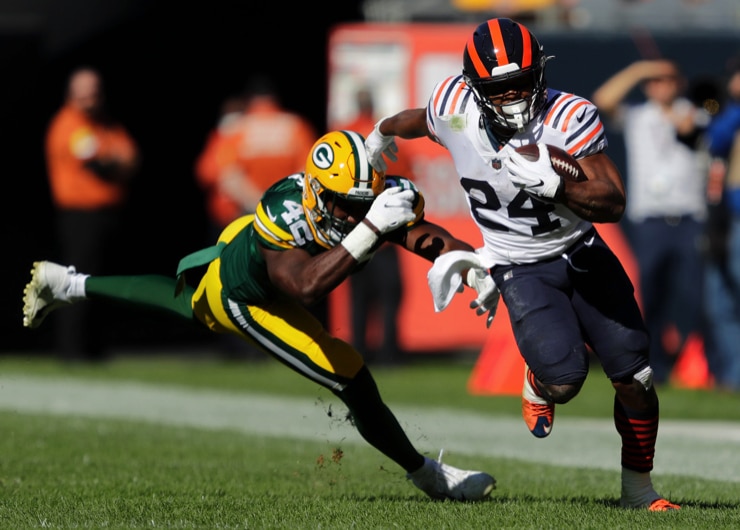 Rookie quarterback Justin Fields and the Chicago Bears face a tall order in trying to avoid falling under .500 on Sunday when they face Tom Brady and the defending Super Bowl champion Tampa Bay Buccaneers on the road.

The Bears (3-3) have had little in the way of breathers through the first six weeks, with winless Detroit the only team with a sub-.500 record. Chicago’s other five opponents have a combined 22-9 record to date, and the next four starting with the Buccaneers (5-1) are a cumulative 15-8 heading into this weekend.

Fields’ on-the-job training continued last Sunday with a 24-14 home loss to archrival Green Bay. He directed a touchdown drive on Chicago’s opening possession but failed to do so again until the fourth quarter. Fields, who was joined in the backfield by fellow rookie and fourth-string running back Khalil Herbert, finished 16 of 27 for 174 yards with a touchdown pass and interception while also scrambling for 43 yards.

This game pits the league’s best and worst passing attacks against each other. The Bears are averaging just 117.2 yards passing, which is 52.2 less than the next-worst team (New Orleans), and they have yet to reach 200 yards through the air in a game this season. Conversely, Brady is averaging 344 passing yards — nearly 100 per game more than Chicago’s total offense — and the 44-year-old still shows no signs of slowing down.

Tampa Bay has won three straight after holding off Philadelphia 28-22 on the road Oct. 14 as Brady threw for 297 yards and two touchdowns while Leonard Fournette chipped in 81 rushing yards and a pair of rushing scores. The Buccaneers will be without tight end Rob Gronkowski and wide receiver Antonio Brown, as both are sidelined with injuries.

Brady and the Bucs have additional motivation for this game as they look to avenge a 20-19 loss last season in Chicago, Brady’s first defeat in six lifetime matchups against the Bears. Given how bettors faded the Bears last week since Packers QB Aaron Rodgers still owns Chicago, many could be taking the same path at various Illinois sportsbooks with Brady under center this week.

Tom Brady will play an Ohio State QB for the first time in his career when he faces Justin Fields and the Bears on Sunday.

And of course, his response to what took so long was A+ 😂 pic.twitter.com/B4dltR6CUC

Most mobile operators in the Land of Lincoln had the Bears as 12.5-point underdogs Friday afternoon, notably higher than the opening line of Chicago +10. FanDuel, Caesars, and the Kambi platform utilized by BetRivers and Barstool Sportsbook all have the number at -110, with PointsBet slightly further back at -114.

DraftKings is the outlier of the sextet with a listing of Chicago +12 at -110.

For those thinking Fields and the Bears can get the better of Brady and spring what would be one of the larger upsets of the NFL season, Caesars has the top moneyline option at +550, followed by PointsBet (+510), FanDuel (+500) and BetRivers (+500).

The choices for the over/under are 47 or 47.5 points, with DraftKings on an island at the higher number with a -105/-115 split. At the lower number, Caesars is the best play for the over with its -110 offering both ways, while PointsBet stands out at -105 for those interested in the under.

Most books are trying to attract Bears over/under team total play with a low-side hook on 16.5 points, with Caesars the best play on the over at -120 and +100 offered there and at PointsBet and DraftKings for the under. FanDuel this time is the book on its own with a flat total of 17 points and a -104/-118 split.

Bears’ RB Damien Williams, on the Reseve/COVID-19 list, was not at practice again today and couldn’t be cleared until Saturday at the earliest because he’s unvaccinated and there’s a mandatory 10-day waiting period.

While Herbert acquitted himself well versus the Packers and ran for 97 yards and a touchdown, the uncertainty of Damien Williams’s availability has sportsbooks in a wait-and-see mode regarding potential prop plays for Bears running backs. Williams missed last week due to COVID-19, and the earliest he can be cleared to return to practice is Saturday.

Both are on the board, though, for anytime touchdown scorers at FanDuel and DraftKings. The former has Herbert +120 and Williams +200, while the latter has +200 and +225, respectively.

That puts most of the prop focus toward Fields and the Bears receiving corps, where there are some early listings, with more expected to be available closer to kickoff. For the over/under on Fields, his passing yards range from 213.5 yards at DraftKings and Caesars (both -115) to 218.5 yards at PointsBet (-115). FanDuel, which is offering 216.5 yards at -114 also has a play on Fields’ rushing yards at 18.5 and -114 in both directions.

Those wanting to wager on Fields having a two-touchdown passing game can grab the 1.5 over/under for +175 at DraftKings on the over and -210 at Caesars for the under. For interceptions, Caesars gets the nod on the 0.5 over/under at -160/+130 versus DraftKings play at -170/+130. Fields is also currently a +390 option as an anytime touchdown scorer at FanDuel, with DraftKings (+240) so far the only other book with a listing.

Top wideout Allen Robinson III has a low value of 53.5 yards at DraftKings and Caesars at -115 both ways, while PointsBet has the highest total at 56.5 yards, also at -115. FanDuel appears bullish on Robinson this week, listing him at 55.5 yards but also with a -130/-102 split. The bands are tighter for Darnell Mooney, with PointsBet at 52.5 yards for -115 and everyone else at 51.5, and everyone has tight end Cole Kmet at 30.5 yards.

To hook or not to hook in the first half?

While the Bears lead the league in fewest first-half points allowed at 6.0 per game, the Bucs have rolled up 66 points in the first two quarters of their three home games and averaged 16.7 points overall. Even with the absence of Gronkowski and Brown, oddsmakers seem convinced Brady can do enough to help Tampa Bay grab a firm halftime lead.

One interesting divergence is the Bears first-half team total, with DraftKings offering a -120/-110 split at 8.5 points and both PointsBet and Kambi listing 7.5 points. The Aussie-based book has a -105/-125 split while BetRivers and Barstool counter with -109/-129.