There is free money to be had for Illinois bettors as the Chicago Bears kick off Week 5 on a short turnaround Thursday night vs. Tampa Bay. 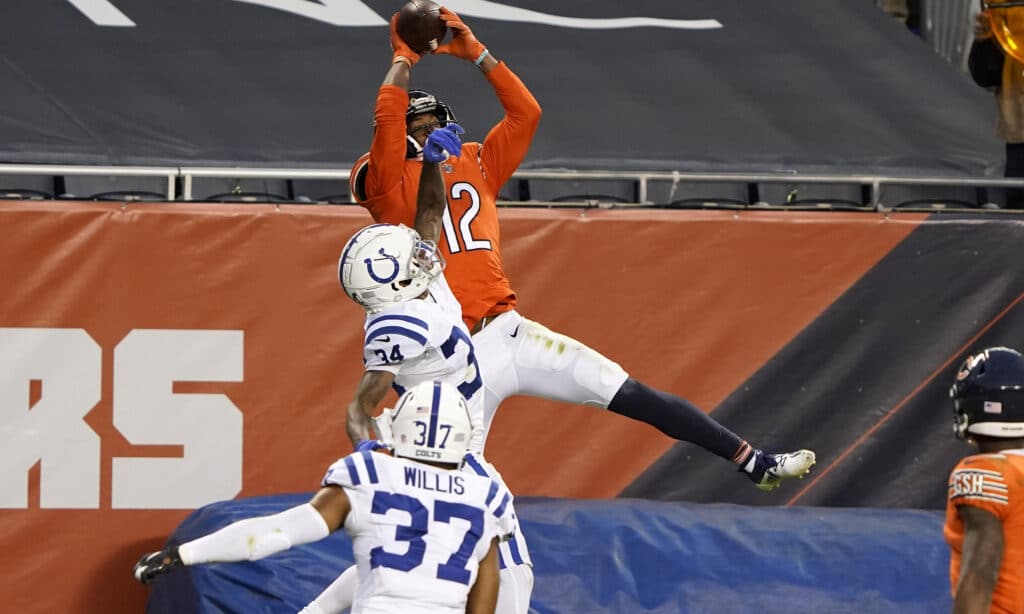 There is free money to be had for Illinois bettors as the Chicago Bears kick off Week 5 of the NFL season on a short turnaround Thursday night versus the Tampa Bay Buccaneers.

The Bears (3-1) are looking to regroup from a 19-11 loss at home to the Indianapolis Colts on Sunday as Nick Foles’ first start of the season at quarterback underwhelmed. Chicago was held to season lows of 28 rushing yards and 269 total yards and enters the contest ranked 31st in third down conversions at 33.9% (19 for 56).

The new-look Buccaneers (3-1), led by 43-year-old Tom Brady, are seeking their fourth straight victory after rallying past the Los Angeles Chargers 38-31 on Sunday. Brady shook off a pick-6 to finish with 369 yards and five touchdowns as he bids to lead NFC South-leading Tampa Bay to its first 4-1 start since 2005.

Prior to joining the Buccaneers in the offseason, Brady went 5-0 against the Bears while with New England, racking up 1,595 yards and 14 TD passes.

How it started: How it’s going: pic.twitter.com/MPXIGhatXh

PointsBet has aggressively courted bettors in the Land of Lincoln since its mid-September launch, and Thursday is no different. The Australian-based sportsbook is offering an “On The House” crowd booster in which the Bears are +86 points. It has since moved the line to Bears +100, and with no juice (+EV) on a maximum $25 wager, bettors are essentially getting $25 free.

The actual betting line has seen a substantial shift since the Buccaneers opened as 6-point favorites Sunday night, with injuries to key offensive players moving the line in Chicago’s favor. Tampa Bay is now favored by only 3.5 points at three of five Illinois mobile sportsbooks —  DraftKings, FanDuel, BetRivers — as of 11 a.m. CDT, while PointsBet and William Hill are offering the Bucs as 3-point favorites at -121 and -120, respectively, and the Bears even money (+100) for both.

All five sportsbooks are offering the over/under at 44.5 points, with BetRivers again providing a slightly better offering at -107 compared to the standard -110. The over has delivered three times in Tampa Bay games and twice in Chicago games, but the under has hit in both games the Bears have played at home.

Buccaneers running back Ronald Jones and wide receiver Mike Evans figure to have the most intrigue for prop plays since Tampa Bay is expected to be without injured running back Leonard Fournette and definitely without wideouts Chris Godwin and Justin Watson. The over/under on Jones’ rushing yards ranges from 67.5 at William Hill (-110) to 70.5 at PointsBet (-115), while Evans has a wider band of 63.5 at BetRivers and DraftKings (-124) to 67.5 at William Hill (-110).

For the Bears, rookie wide receiver Darnell Mooney has appeared on some boards with an over/under of 40.5 yards after totaling five catches for 52 yards on nine targets versus Indianapolis. No. 1 receiver Allen Robinson II has a sizable band between 70.5 and 75.5 receiving yards across four sportsbooks, with DraftKings and BetRivers offering -124 for 70.5 yards, PointsBet at -115 for 72.5 yards, and William Hill at -110 for 75.5. PointsBet is offering an odds boost for Robinson at +110 for over 75 yards.

The first head-to-head matchup between Foles and Brady since Foles directed the Philadelphia Eagles to their Super Bowl LII win over the Patriots has Brady a -139 head-to-head favorite to throw for more yards than Foles (+111) at BetRivers. The over/under of passing yards varies for both signal-callers, with Foles ranging from 248.5 to 253.5 yards and Brady from 261.5 to 265.5 yards.

In a nod to the “Philly Special” play in which Foles caught a touchdown pass, DraftKings is offering +3600 if it occurs once more.