Chicago is a small favorite despite last week's loss, and fans are eager to see if rookie QB will be given a larger role. 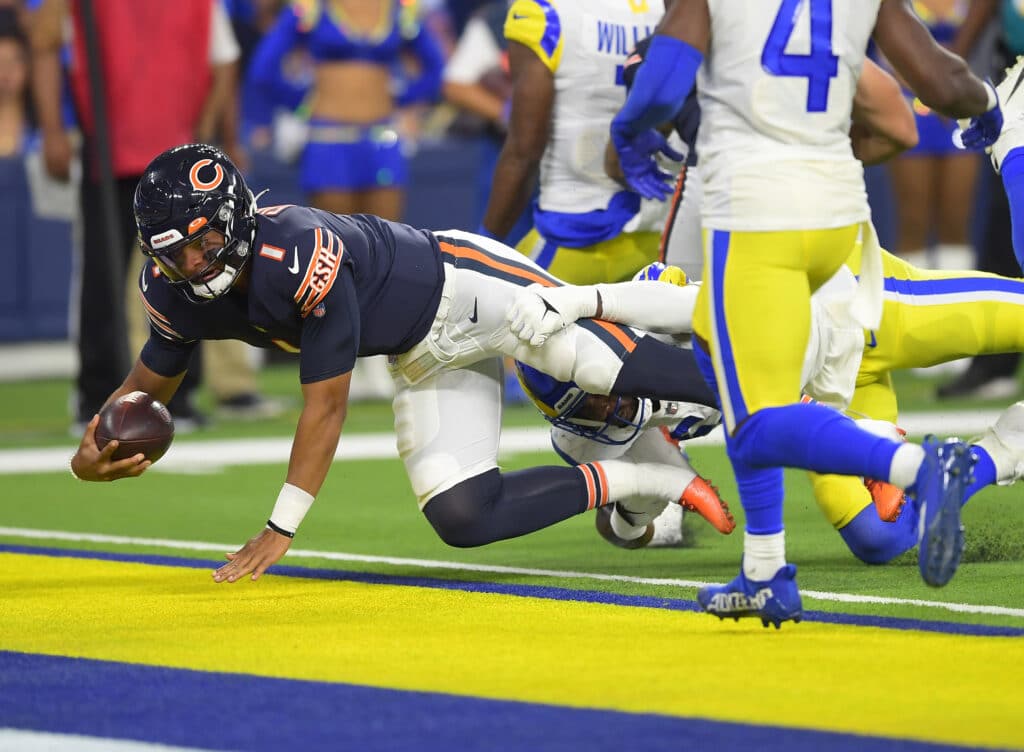 While there may not be an on-field quarterback controversy in Chicago with Andy Dalton and rookie Justin Fields, there is little doubt the Bears faithful will make their preference known during Sunday’s home opener versus the Cincinnati Bengals.

Fields, whom the Bears traded up for with the New York Giants to select 11th overall in this year’s draft, had three snaps in Chicago’s 34-14 road loss to the Los Angeles Rams Sunday night. He completed both his passes for 10 yards and ran for a 3-yard touchdown, which only intensified the feelings among fans who want to make the future now and elevate Fields to starter over Dalton.

Dalton is also facing his former team for the first time. He was selected by Cincinnati in the second round of the 2011 NFL draft and played with the Bengals for nine seasons before spending 2020 with the Dallas Cowboys. When he signed with the Bears, the prevailing view was that he was a caretaker for the offense until Fields is ready.

As the Bears ponder the quarterback position, the Bengals appear set there for years to come with Joe Burrow. The No. 1 overall pick of the 2020 draft, Burrow looked fully recovered from the torn ACL he suffered as a rookie. He led Cincinnati to a 27-24 overtime win over Minnesota last weekend.

Burrow completed 20 of 27 passes for 261 yards and two touchdowns, including a key 32-yard hookup with C.J. Uzomah to set up Evan McPherson’s game-winning 38-yard field goal as time expired. Joe Mixon added 127 rushing yards and a touchdown. As a result, Cincinnati seeks its first 2-0 start since 2018.

The line opened with the Bears as 4-point favorites, which prompted a rush on the Bengals and moved the line in their direction. Fields, though, provides plenty of food for thought across Illinois sportsbooks taking action on prop plays.

All six mobile operators have moved their lines notably toward the Bengals since opening at Bears -4. As of Friday morning, PointsBet was the only one offering the Bears -2, which comes at -110 in both directions. Caesars has the only standard play at 2.5 points, while FanDuel has the best -2.5 value for the Bears at juice of -104. DraftKings (-105) trails close behind, while the Kambi platform powering BetRivers and Barstool has them at -108.

Barstool, BetRivers, and FanDuel have the best Bears moneyline offering at -134, though the range is narrow as PointsBet (-136) and DraftKings and Caesars (-140) closely trail. The over/under is 45 points at both Caesars and PointsBet at -110 both ways and 45.5 elsewhere, with FanDuel listing a -106/-114 split with the extra half-point. PointsBet also offers Chicago at -125 on the three-way moneyline.

While there could be increased offerings closer to kickoff, it is a somewhat limited market for Fields-related prop plays. BetRivers and Barstool are offering the rookie QB as a +750 option for anytime touchdown scorer and +4000 to score either the first or last touchdown, while FanDuel has +700 for an anytime TD and +3600 for the first one. Notably, Caesars did not have Fields among its options for these categories.

Oddsmakers have also shied away from offering passing prop plays for Dalton, perhaps reflecting the expectation Fields will see more action. That leaves much of the action centered on Burrow, whose best over/under for yards can be found at FanDuel at -114 in both directions for 265.5 yards, with BetRivers and Barstool offering -115/-114 at the same total.

For those thinking the Bears defense can limit Burrow to one or zero TD passes, PointsBet has the best play for the over/under 1.5 touchdown passes at +110, while Caesars has the best value for the over at -130.

The books have all hung 64.5 rushing yards as the number for Bears running back David Montgomery, with only BetRivers and Barstool deviating from the -115 with a -117/-112. The Kambi duo also have a higher rushing and receiving total for Montgomery at 86.5 yards with a split of -115/-113. DraftKings and Caesars are at 85.5 yards and -115 in both directions.

Bears wide receiver Allen Robinson III has an over/under of 70.5 yards everywhere except at Caesars and DraftKings, which are both offering 72.5 yards at -115 both ways. FanDuel is offering -114 in both directions and PointsBet has -115 while Barstool and BetRivers counter with a -115/-113 split.